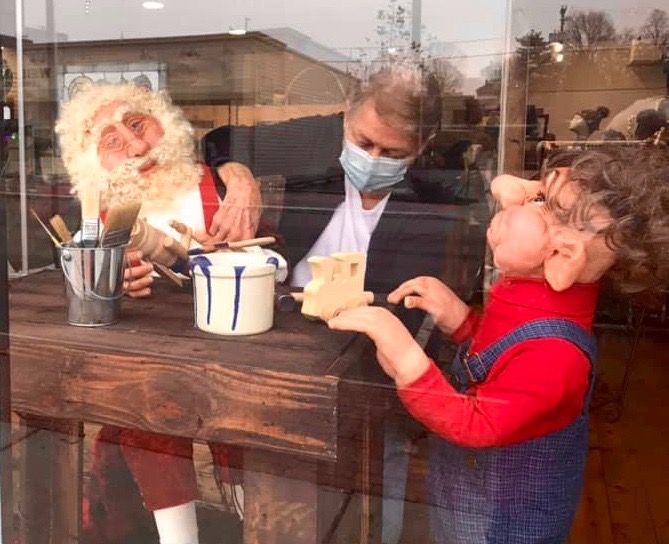 Marcia Myers sets up her Santa & his elves display in the window of Homegrown on Main, 65 W. Main St. in Logan. 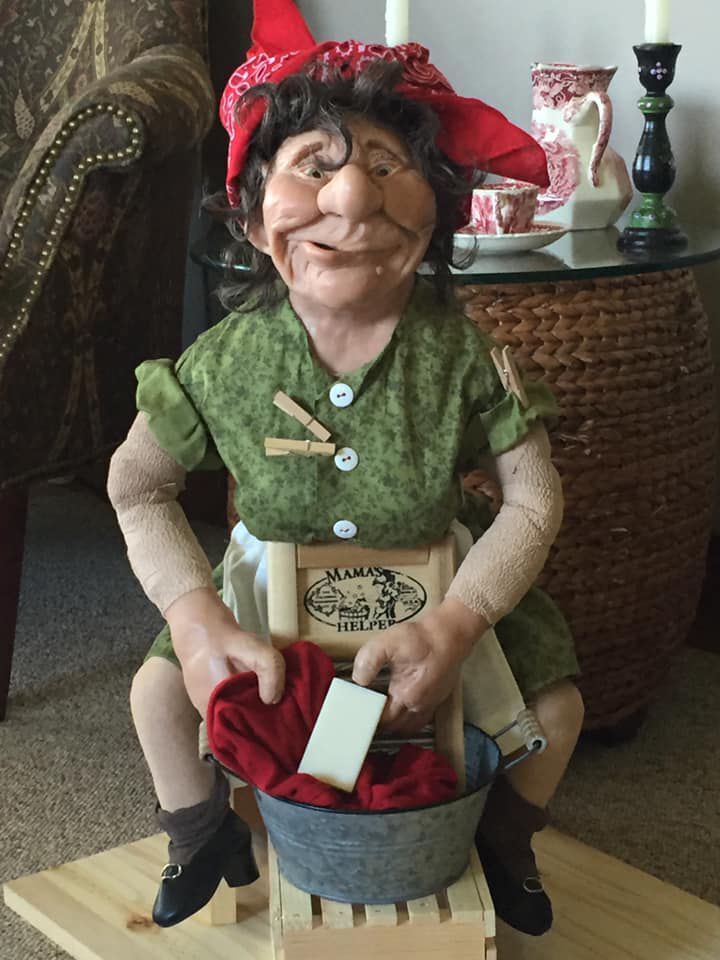 Wilma the washerwoman is one of Marcia Myers' many creations.

Marcia Myers sets up her Santa & his elves display in the window of Homegrown on Main, 65 W. Main St. in Logan.

Wilma the washerwoman is one of Marcia Myers' many creations.

LOGAN — “I just take my thumbs and start moving clay around.”

That’s local artist Marcia Myers, describing how she begins sculpting a face. As she works, the person she’s trying to bring to life will start peeking out of the clay, offering hints of their temperament. Myers pays attention, asks questions, gives her subject a fitting name, and works up what screenwriters and novelists would call the character’s “backstory.”

‘I have to make up stories with my people,” Myers confides. “And I’ll talk to them.” She laughs. “I don’t know if you want to tell anybody that, but I will talk to these people and say, ‘Wow – what do you think you’re doing here?’”

The results – sometimes after months of work – are curiously expressive figures of all kinds including cowboys, gamblers, washerwomen – and, over the years, a fair number of Santas.

Myers’ latest work in that line can be seen in the storefront window display at the Homegrown on Main art gallery/information center in downtown Logan, run by the Hocking Hills Tourism Association; there a serene St. Nick, attended by a small entourage of elves, tenderly inspects a newly made wooden soldier.

Diane Welch, manager of the gallery, says the art installation has been a hit with the public. “Oh my gosh – they are just loving it,” she reported Friday.

Crafting the display took Myers the better part of a year – a task slowed by very serious health problems that she recounts with a casual cheerfulness.

She seems much more interested in talking about what goes into creating her people, from getting the first idea of who they’re going be, to the nuts and bolts of putting them together.

The ideas come from all around. “Maybe I’ll see a photo of somebody,” Myers says. “I’ll cut things out; I’ll say, ‘Oh, I like the way they’re crinkling their face.’ And it’ll kind of give me an idea of a look I might want to have.”

She makes the heads and hands out of something called Super Sculpey clay, which is worked soft, then baked hard in an oven in her garage. The level of detail, seen up close, is remarkable. The elves in Homegrown on Main have precisely crafted sets of teeth in their mouths, made from an iridescent type of clay, while the backs of Santa’s hands bulge with veins so realistic you can almost see them pulse.

The bodies come from mannequins. “I try to get old ones if I can, or cheap ones, because I cut the head and hands off,” Myers explains. “The garbage guy has to really wonder what that lady up on the hill is doing when he sees those heads and hands! But then I mold my own life-sized head, and then my hands, and I attach them. And once I dress them you can’t tell what’s underneath.”

Hair can come from wigs or sheep’s wool – or from alpacas, when Myers and her husband used to have the llama-like creatures among those they kept at their Bear Run Road farm. The clothing Myers either makes – she’s been sewing since she was a kid – or buys second-hand. But she gives most attention to the faces.

‘I try to give character to the eyes and the mouth to make them seem alive,” Myers explains. “The eyes to me are the most fascinating; you can do a lot with the eyes.”

Every little detail adds to the effect. The window display’s smallest elf, for example, named Lucy, is “kind of an ornery thing,” according to her maker. “She doesn’t care about colors; she’s got red hair, and red bows in her red hair – I mean, who does that? And I gave her one tooth, like she’s lost a tooth and only one has come in.”

Myers was 65 years old when she took up her art 15 years ago, after seeing an ad for a short sculpture course. She ended up only corresponding and talking by phone with the woman offering the course, but she learned the basics.

At first, she recalls, “I didn’t get serious about it; I was just kind of messing around.” But as she progressed, she “got into it big time,” and now she can’t visit an antique shop or thrift store without looking for props and outfits to equip her created people. She and her husband have three children, seven grandchildren, and three great-grandkids, and they, too, she says, “have all have contributed to ideas and buying stuff for me.”

She’s sold some big pieces over the years, including a piece put on display in the lobby of a Lancaster consulting firm, and she thinks she may start advertising her many western-themed works around Texas, Oklahoma and her home state of Wyoming. But sales, clearly, are gravy – Myers just plain loves her work.

“I tell you – I don’t get depressed,” she says. Though these days she’s periodically laid low by medical treatments, she says, “as soon as I feel good enough I dash out to my studio and I’m working on something.”