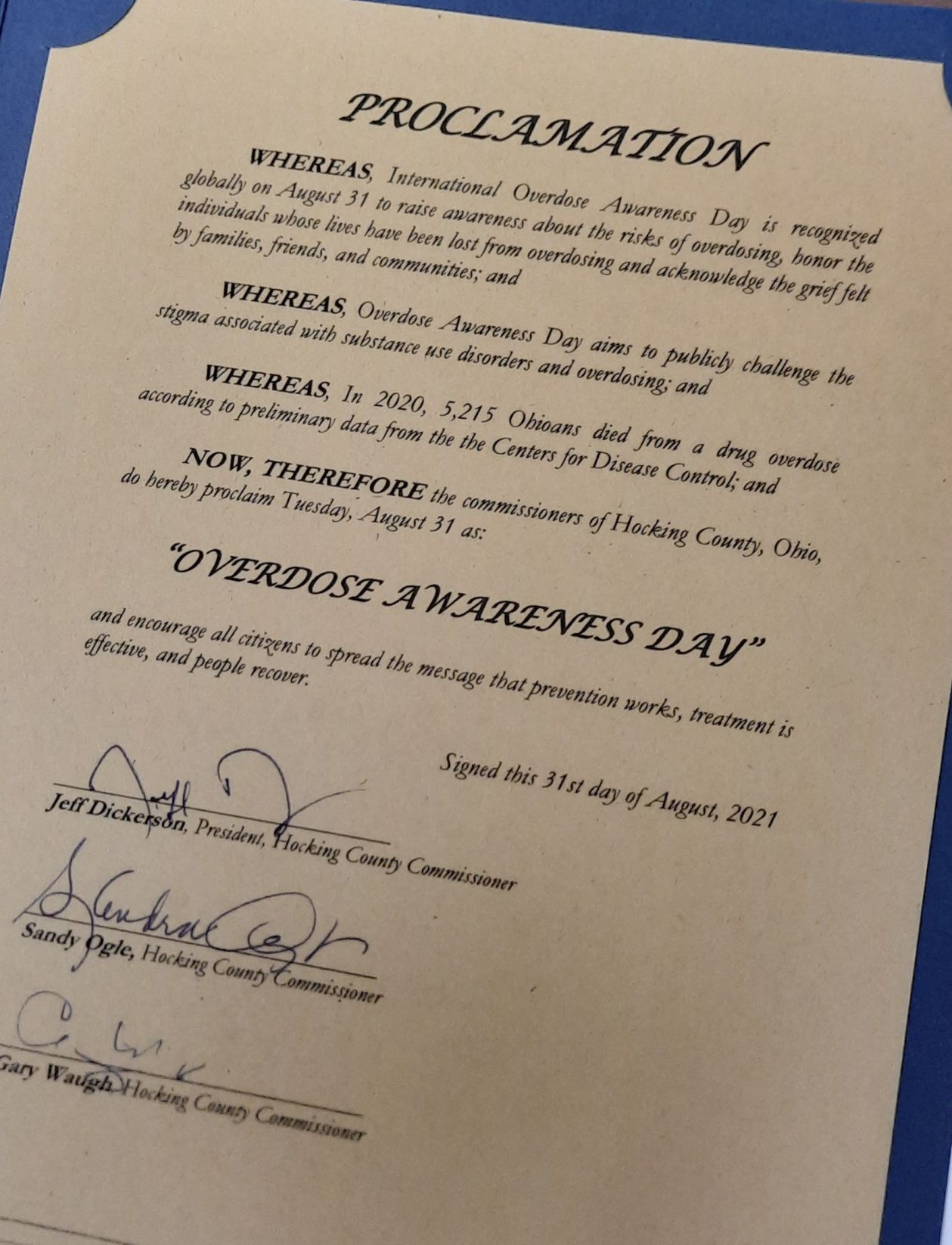 Brian Howard, community services manager at Health Recovery Services, a 317 Board-funded private nonprofit that treats substance abuse, introduced a proclamation the commissioners signed, declaring the last day of August to be a day that raises awareness about overdosing, honors those who have died, and acknowledges “the grief felt by families, friends, and communities.”

The proclamation read that, according to preliminary data from the Centers of Disease Control and Prevention (CDC), 5,215 Ohioans died from drug overdoses in 2020. Outside, the Hocking County Courthouse’s American flag stood at half-staff by order of Gov. Mike DeWine in honor of Ohio Overdose Awareness Day.

According to a press release from DeWine’s office, Tuesday marked the first observance of Ohio Overdose Awareness Day following Senate Bill 30, which he signed in June.

Aug. 31 is also International Overdose Awareness Day, which, according to overdoseday.com, was begun in 2001 by Sally J. Finn at The Salvation Army in St. Kilda, Melbourne, Australia.

Just this year, almost double the number of Hocking County residents have died of drug overdoses this year compared to 2020, according to a previous Logan Daily News report.

In an email Tuesday Hocking County Health Department Registrar Shari Schorr said that there are an additional five deaths that occurred in the county and five Hocking County resident deaths with results pending; however, “I doubt that they are all drug-related,” Schorr stated. Schorr explained that it can take several weeks to months for autopsy and toxicology results to be completed.

In observance of Ohio Overdose Awareness Day, throughout the week organizations across the state are distributing free naloxone, or NARCAN, a medicine that rapidly reduces the effects of an opioid overdose by way of injection or nasal spray, according to drugabuse.gov.

The state and county’s observations come at a time of finalizing national efforts to reimburse local governments for damages caused by the “Opioid Epidemic,” allegedly created by pharmaceutical producers and manufacturers.

On Aug. 10, the commissioners signed a resolution to accept the material terms of the statewide OneOhio Subdivision Settlement, which came out of joint negotiations with drug manufacturers and distributors in a lawsuit over the impacts of opioids.

The state is now on the verge of an $808 million settlement, which will be divided up into three portions, per the OhioOhio settlement: 55% to a foundation created to disburse the money and fund programs that benefit Ohioans affected by opioids and/or prevent addiction; 30% for local community recovery programs; and 15% to the state of Ohio, according to a March press release from DeWine’s office.

The commissioners passed a resolution to enter into the lawsuit around this time four years ago. On Aug. 28, 2017, Resolution #18-2017 declared that “the unlawful distribution of prescription pain pills has created a public nuisance in Hocking County and has caused harm to the residents of Hocking County.”

According to the suit, Hocking County Board of Commissioners (Plaintiff) v. AmerisourceBergen Drug Corporation, Cardinal Health, Inc. and McKesson Corporation (Defendants), the county did not seek compensatory damages for death, physical injury to person, emotional distress or physical damage to property.

It did seek damages to “recoup the costs incurred by the county as a result of the nuisances; damages necessary to eliminate the hazard to public health and safety as well abatement of the public nuisance, including both injunctive relief and an abatement fund.”

In other items of business Tuesday, Dickerson shared his experience on a call last week with Gov. DeWine and Lt. Gov. Jon Husted. The call was “geared toward southeastern Ohio and the southern counties,” Dickerson said. He brought county concerns to DeWine, specifically those related to traffic safety.

Dickerson mentioned a public meeting the commissioners had with Ohio Department of Transportation District 10, which serves Hocking County and eight others.

According to Hocking County data from the Ohio State Highway Patrol, there were 244 crashes investigated in the county between Jan. 1 and Aug. 29, 2020; this year, between those same dates, there have been 295. In 2019, the county had two fatal crashes, four in 2020 and one this year so far.

During the ODOT meeting last month, Hocking County EMA Director Robert “Bozz” Salizzoni shared data collected from the Hocking County 911 Dispatch. From Jan. 1, 2020 to July 26, 2021, there were 52 incidents at State Route 374 alone. Out of those 52 incidents, 32 were motor vehicle accidents (MVA). From Jan. 1, 2019 to Dec. 31, 2019 there was only one MVA. Incidents are anything vehicle-related, such as vehicle fires or erratic driving, he said.

With 4.5 million tourists coming into the Hocking Hills each year — including DeWine and Husted themselves — traffic safety is a top priority for the county, Dickerson said, and the commissioners are working to stay on top of things.

“They’re going to look into this. He guaranteed me — the governor did — that he would address the situation with the director of the Ohio Department of Transportation. And I just (really appreciated that),” Dickerson said.

Dickerson said that the three biggest regional issues county leaders discussed on the call were sewer, broadband and water.

The county is not changing its tag fee of $15; however, it is looking into offering online dog tag registration in the coming months. The county licenses about 4,500 dogs per year, Deputy Auditor Jeff Hunter said.

The next commissioners meeting will be Thursday (today) at 9:30 a.m. in the Commissioners Chambers at the Hocking County Courthouse, 1 E. Main St. Meetings are open to the public and livestreamed on the commissioners’ Facebook page at www.facebook.com/HockingCommissioners/, where they can also be watched at a later date.