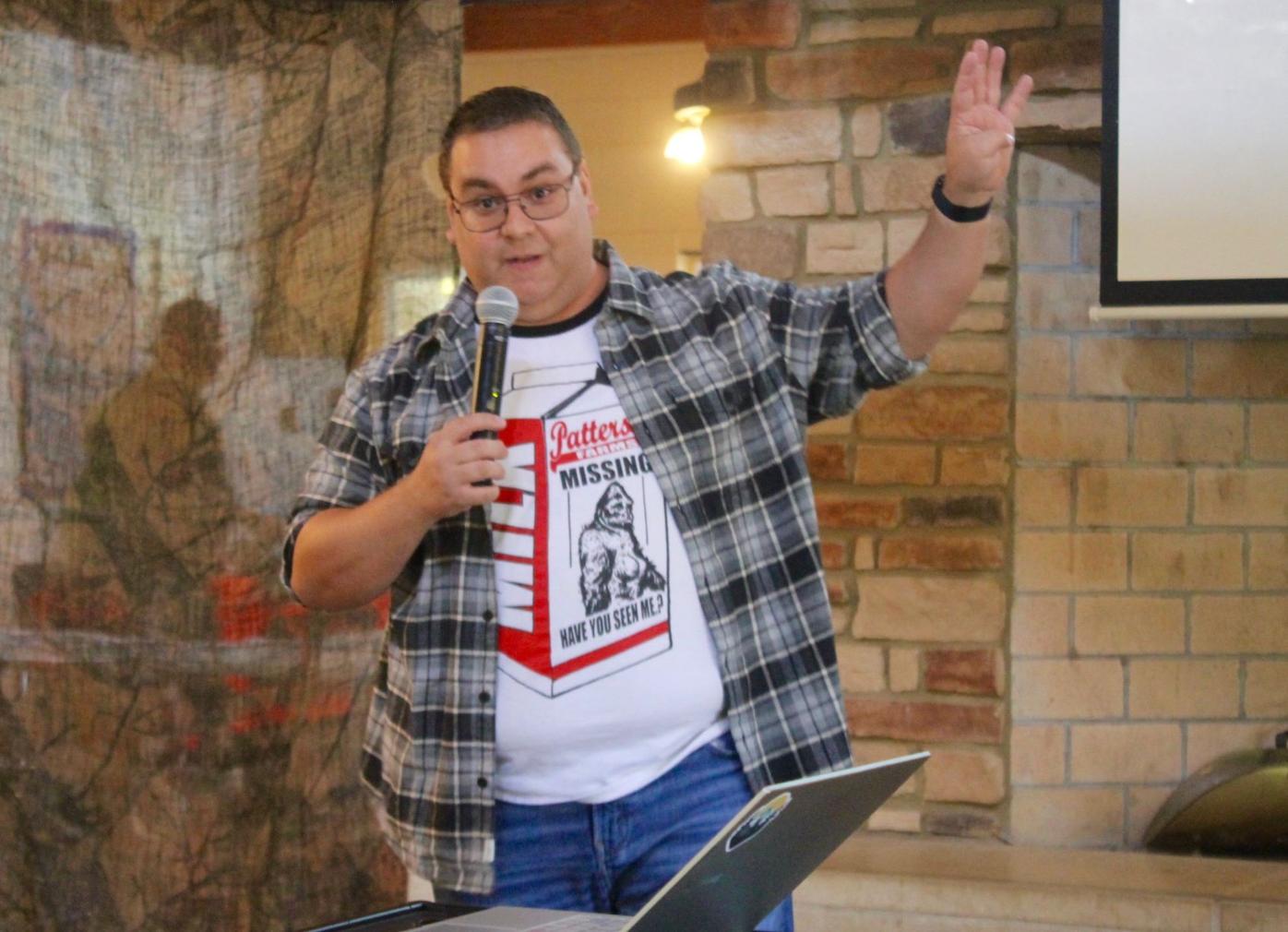 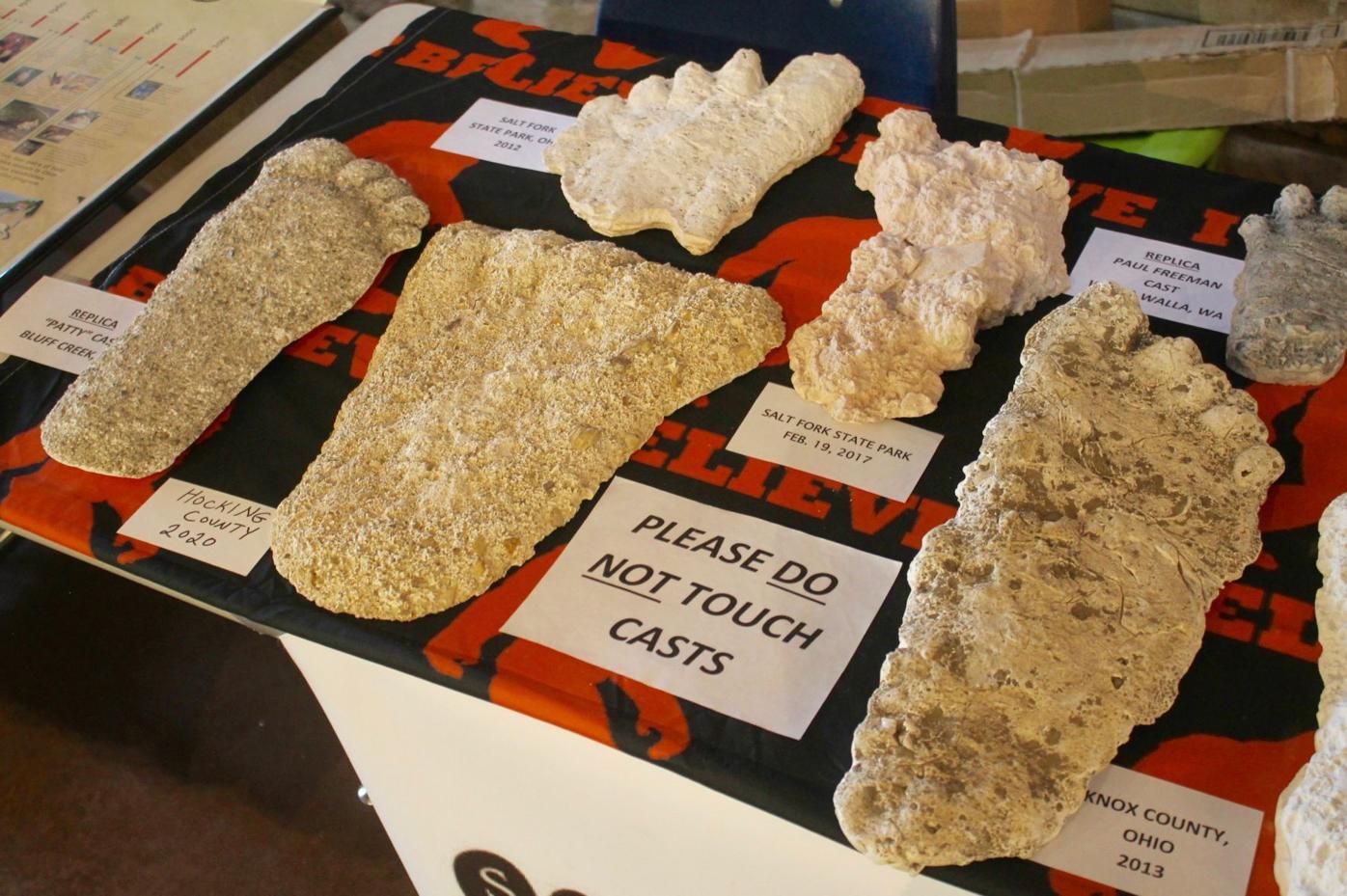 Casts of footprints suspected to have been made by Bigfoot.

Casts of footprints suspected to have been made by Bigfoot.

SOUTH BLOOMINGVILLE – As a long-time investigator of Bigfoot and other odd phenomena, Sean Forker has questioned many people about reported encounters with the legendary hominid-like creature. But until he had his own experience with what may have been a Sasquatch, he says, he didn’t appreciate the importance of empathizing with those he interviews.

“I had an experience of my own that almost made me quit the field in general,” Forker recalled. “It was terrifying.”

Forker, who co-hosts the Sasquatch Experience podcast, told his story as one of the speakers at the fifth annual Hocking Hills Bigfoot Conference, which took place Saturday at Camp Oty’Okwa in South Bloomingville. The event was a fundraiser for the camp, which is owned and operated by Big Brothers Big Sisters of Central Ohio. It raised $2,404.70.

Forker and some other researchers were camping out in a wooded area of Clearfield County, Pennsylvania, known for its high concentration of reported Bigfoot sightings. While sitting around a campfire after dark, he said, they saw something dart by in the woods, and heard it running away. After they banked the fire and retired to their tent, he said, they heard footfalls outside; then “All of a sudden I start seeing this orange-ish kind of glow” – which turned out to be from another log having been mysteriously put on the fire. At one point, he said, the men could hear the creature, whatever it was, moving in circles around the camp; at another point it stood at the perimeter, “like it’s taunting us.” Finally, bucking up their courage, the investigators charged at the thing in a group, chasing it off.

The experience scared him so badly, Forker said, that he couldn’t return to the site for four years. What it taught him, he said, was to be patient with people who have had similar experiences, and understand that their observations may be limited by their fear.

He noted, for example, that among the gear the men had brought along was a night-vision camcorder – “and we didn’t use it! Because in that moment you’re not thinking about getting the world’s greatest evidence; all you’re thinking about is, ‘How are we going to get out of here?’”

The experience, he said, “put me in a much better position to investigate and talk to witnesses now, because I have a lot more empathy for the people that do have an experience. I think sometimes as researchers and investigators we have to think about that part. You’re talking to another person and you want that information, you feel like it’s the most important thing, but really you’ve got to be patient and deal with that person in trauma.”

He also stressed, however, that a researcher must maintain a healthy skepticism, and be on the alert for hoaxers.

“We’ve made hoaxing easier than ever,” he warned. “There are so many podcasts out there; you can listen to a couple of podcasts and go out and fake the world’s greatest Bigfoot sighting… At the end of the day, we don’t know anything about this creature; we can’t (even) prove that it exists yet.”

Another conference presenter, Doug Waller, focuses on Ohio; he has written multiple books on Buckeye Bigfoot sightings, and in 2008 founded the Southeastern Ohio Society for Bigfoot Investigation. He shared some newly collected stories with the conference audience, including that of a truck driver who had an encounter while traveling U.S. 22 near Salt Fork State Park.

“He’s driving this semi along,” Waller recounted. “All of a sudden four deer came out across Route 22. He almost hit them, so he stopped... Three of the deer went down along parallel with his truck on the road; the fourth deer went out into a field… He saw something standing up at the tree line that was tall, and dark, and he assumed it was hair-covered. And it’s watching the deer, too. He said it immediately dropped down from on two feet to four feet. And it came out across that field lickety-split, and got that deer.”

Another Ohio story – featured on an episode of Animal Planet’s “Finding Bigfoot” TV program – came from a Noble County woman who had walked her children to a playground in Sharon, Ohio. As her two daughters played, she heard something moving in the adjoining woods, that she thought might be an escaped cow.

“She watches the spot where the noise is coming to, and instead of a cow… a female Bigfoot comes walking out of the trees, and it’s standing there watching the kids play,” Waller reported. “And (she) is absolutely terrified that this thing is going to kill her and abduct the kids.”

The woman managed to get the attention of her two daughters, who were busy playing on the playground equipment. “They come running to her,” Waller said. “And one girl says, ‘Mom, is that Bigfoot?’ And she says, ‘I think so. Just stay behind me, and don’t run.’ And they slowly backed away until they were a safe distance away and the creature went back into the woods. And they made their way back up to the road to her grandmother’s house. And once at the grandmother’s house she thought, ‘Well, we’re safe.’ But her nephew had a Doberman tied up outside. That dog, she said, was never afraid of anything. And it was terrified; it was digging a hole, trying to get under the house.”

The audience at the event was small – around 30 people – but clearly engaged. Attendee Jon Fry of Circleville said he was there because “I’m interested in all kinds of paranormal phenomena. We have a UFO group in Circleville, the Roundtown UFO Society, that’s existed for 31 years.”

He admitted to having no idea of what Bigfoot might be, but noted that there seem to be two broad schools of thought among those who take the subject seriously.

In addition to speakers, the conference offered a wide variety of Bigfoot books, merch and memorabilia. Artist Sherwin Pagal Quiambao, of Cryptids & Crafts, traveled from Findlay, Ohio, to sell his imaginative renderings of Bigfoot and other shadow-dwelling creatures.

“I’m very interested in monsters and creatures of this sort, especially myths and legends, because one man’s myths may be another man’s reality,” he explained. Because of his Filipino heritage, Quiambao added, “I kind of relate to these creatures, as somebody who has a heritage that is foreign to this country in many regards. These creatures like Bigfoot or Chupacabra or what have you, they’re part of the culture. But though they are part of Americana, they’re still on the outside, or the fringe of it. And in some ways I kind of feel like that myself. I don’t have to hide away like Bigfoot has to, but when it comes down to it, I did have to sort of bury my own heritage in some regards, just to fit in a little bit better. I don’t meet too many other Filipinos – just like I can imagine Bigfoot doesn’t meet too many other Bigfoots.”