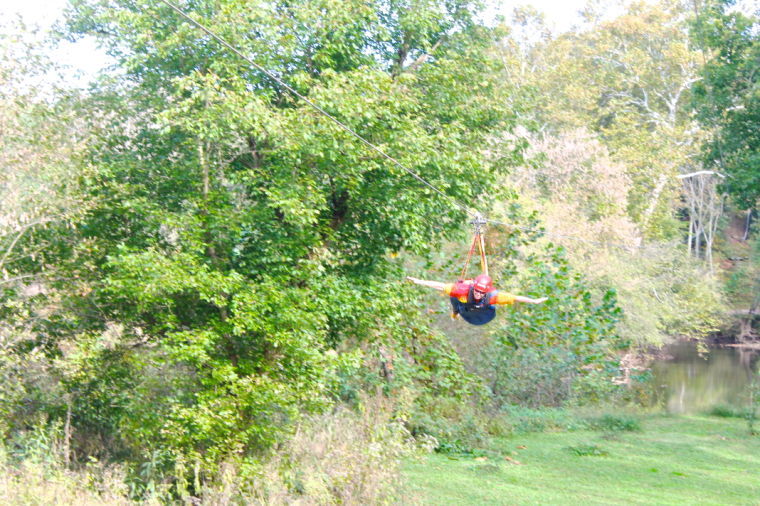 Sue Austin, Ph.D., of Tallahassee, Fla. is ziplining across the United States and completed her 99th zip of the year at the Hocking Hills Canopy Tours late last week. Here, she soars above the ground and Hocking River (back right) to reach the landing point. 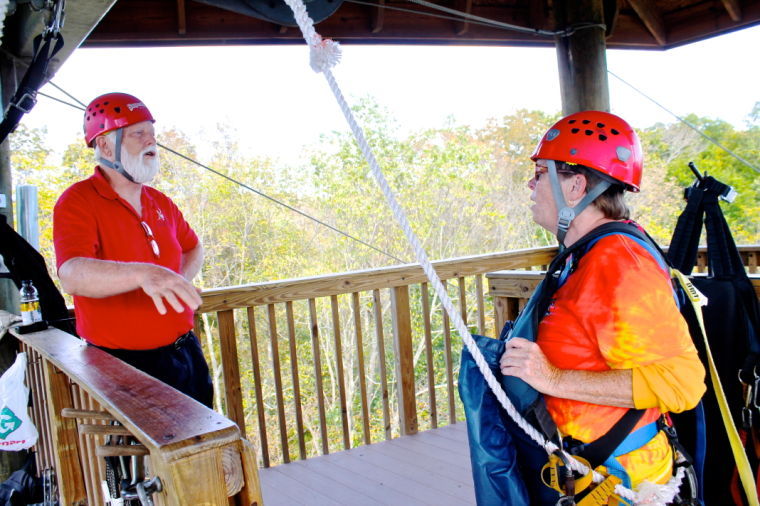 Larry Gerstner, co-owner of the Hocking Hills Canopy Tours, tells Sue Austin a little bit of the history of their ziplining business.

Sue Austin, Ph.D., of Tallahassee, Fla. is ziplining across the United States and completed her 99th zip of the year at the Hocking Hills Canopy Tours late last week. Here, she soars above the ground and Hocking River (back right) to reach the landing point.

Larry Gerstner, co-owner of the Hocking Hills Canopy Tours, tells Sue Austin a little bit of the history of their ziplining business.

LOGAN — A Florida woman who is ziplining across the country celebrated her 99th zip at the Hocking Hills Canopy Tours late last week.

Sue Thornton, Ph.D., is from Tallahassee, Fla. and might even be considered a professional zipliner since she’s completed more than 99 jumps in 25 states this year alone.

At 60-years-old, Thornton decided to take up ziplining and add a new adventure to her life. She plans to write a book about the many ziplines she has explored when she returns home later this year.

In 2012, she managed to travel and visit all 50 states in 115 days, and then traveled to a friend’s house on the beach and wrote a book about her adventures in two months.

Her book, “Never Too Old for Adventure,” is the journal of her visit to all 50 states. After hiking, kayaking, surfing, parasailing, snorkeling and ziplining, she grew especially fond of ziplining, which led her to take on the additional challenge of ziplining across the United States.

“The best way to see the states is to follow the ziplines because they don’t put them in ugly places,” Austin said as she signed a waiver before gearing up to complete the Hocking Hills Super Zip on Friday.

Despite all her travels, she said it’s hard to pinpoint her favorite zipline. “I found that I like them all,” she said. “You can’t really rank them because they’re all different. It would be like comparing the super long one to the canopy tour. How do you do that? You can’t. I’ve done all the different ones, and different things appeal to different people. My favorite is the more lines, the better.”

Austin ziplined at The Wilds in Zanesville earlier in the day before traveling to Rockbridge to complete the Super Zip and Hocking Hills Canopy Tours.

“I want to zipline as many as I can,” she explained. “I haven’t found some in some states, like North Dakota. I did a ziprider in South Dakota. That’s just a zip down and back, and that’s all I found.”

When Austin’s two grown children moved away to college, she realized she had a lot more time on her hands. “I was all by myself in the middle of the woods, and I said, ‘You know, this is not good.’ And so that’s when I took a couple month-long trips,” she explained.

From there, she realized she could drive to all 48 states. But a friend suggested visiting all 50 states, so that’s what she did.

“I just booked a trip and flew to Alaska, and when I came back I started my drive, and when I got to Portland, Ore., I flew to Hawaii,” she said. “I’m a full-timer traveler now. I’ve been home three weeks in the last year.”

Austin admits, though, that she did house-sit for her parents in Tampa, Fla. for three weeks when they were on an around-the world cruise.

“It kind of runs in the family,” she said of her family’s travel habits.

Austin grew up in Tampa, Fla., but at the age of 29, she grew tired of the city and concrete jungle, so she moved 22 miles southeast of Tallahassee, Fla. and bought 10 acres in the middle of the woods.

Although she originally started out in biology, Austin said she got tired of begging for grant money and started a career as a computer programming analyst. She had her two sons and enjoyed watching them grow.

“When they started laying off the programmers, I got laid off, and started a bookstore for a little while. I still have 7,000 books — and nobody reads books anymore, so I have to get rid of those — and then I went back at 55 to finish my Ph.D., which I had started when I was in my late 30s,” Austin said. “I got pregnant, but I was so excited and wanted to be a mom.”

At the age of 55 after her boys were grown, Austin decided to finish her Ph.D. and started traveling full-time.

She isn’t sure when she’ll stop ziplining, although her next goal might be getting into the Guinness World Records. A quick search of their website found there are currently no records of anyone ziplining, meaning Austin may have found her niche.

There are approximately 400 ziplines located throughout the United States, she said, although it’s too soon to know if she'll complete them all.

“I’m not sure if you can keep up with as many as are being built,” added Larry Gerstner, co-owner of the Hocking Hills Canopy Tours who accompanied Austin during her trip along the Super Zip.

In 2007 when the canopy tours opened, there were just 12 located throughout the United States, he noted.