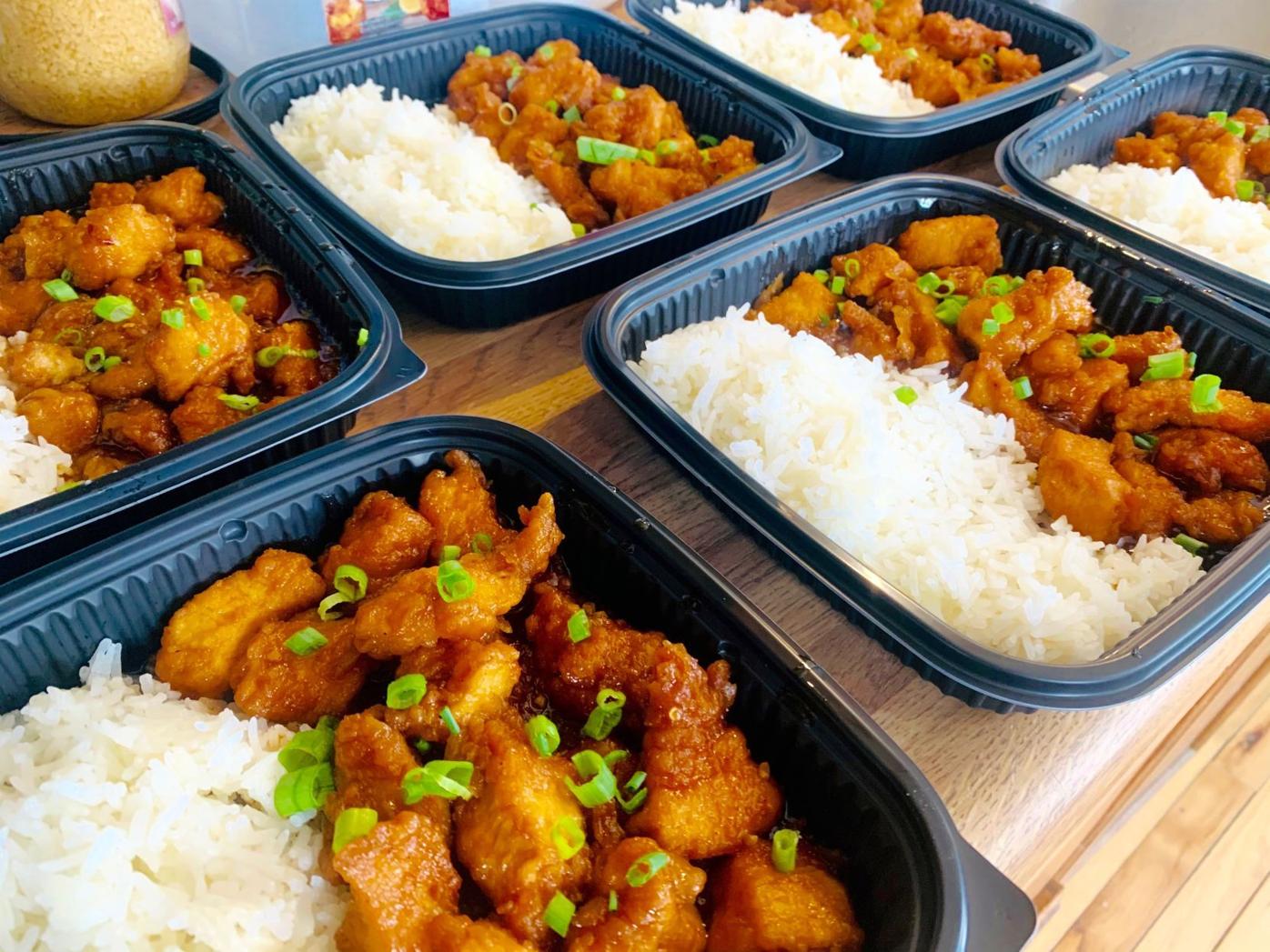 These chicken and rice dishes are among the fare offered by Knights of the Kitchen Table. 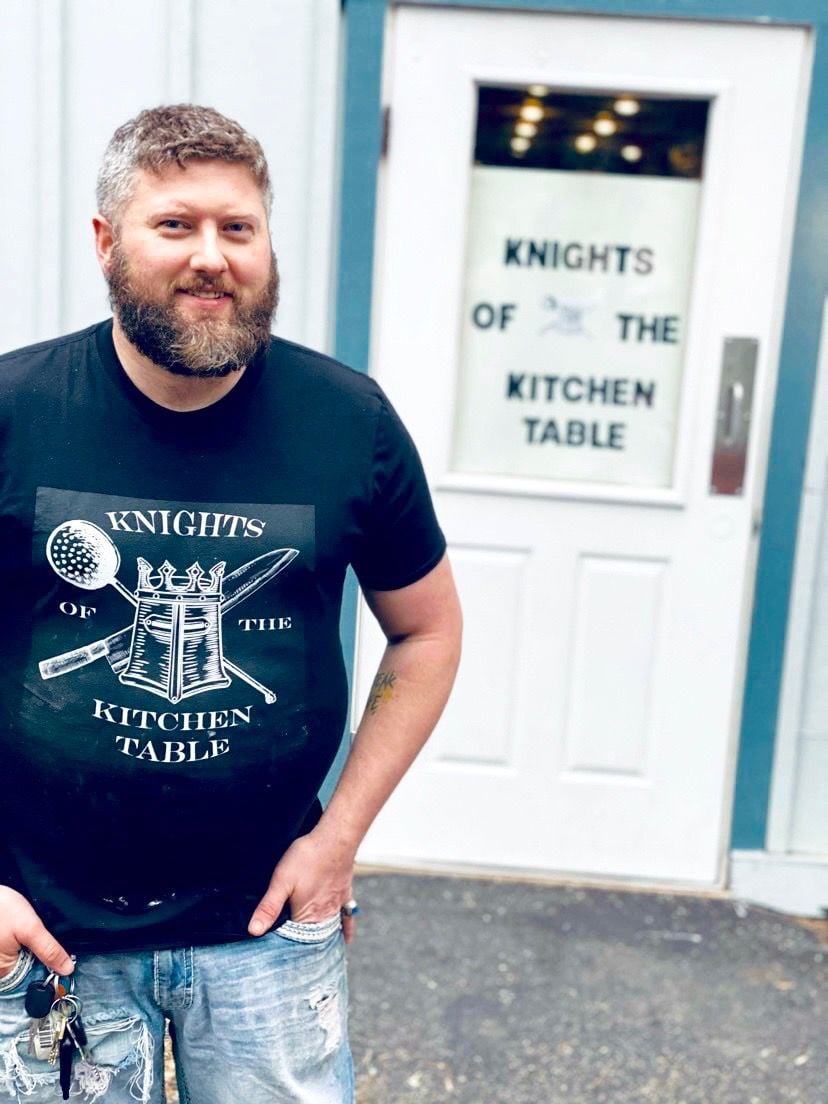 Kevin Knight stands outside the kitchen door of Knights of the Kitchen Table.

These chicken and rice dishes are among the fare offered by Knights of the Kitchen Table.

Kevin Knight stands outside the kitchen door of Knights of the Kitchen Table.

“Ghost kitchen” is a term that first appeared in a 2015 NBC 4 New York exposé broadcast story. Simply put, a ghost kitchen is one that operates within a restaurant; it does not have a full-fledged facility of its own. Usually, ghost kitchens only offer delivery or take-out.

The Feed’s popularity has increased this summer; Roley appeared on Columbus TV news station Fox 28 in late July. A few days later, The Feed was featured on NPR via Boston affiliate WBUR-FM.

The story of The Feed is one of Roley’s career; about seven years ago, at 24, he attended Hocking College for culinary classes. He grew up wanting to be a commercial airline pilot, he said.

But his love of food eventually found a way; following culinary school he worked in Columbus and eventually came back to the Hocking Hills.

However, in spring 2020 Roley was laid off from his job as a sous chef — right when COVID began hitting Ohio. Like many across the country, he found himself unemployed during the pandemic.

“So being laid off... I just kind of took a break for a minute and decided, like what I wanted to do. And then they started pumping out free money,” Roley said, referring to the state’s pandemic unemployment assistance (PUA), which provided an additional $600 on top of regular unemployment last year during the height of the pandemic. “I was literally making more taking care of stuff around the house and my kids and stuff than when I was working — which was crazy.”

Roley said his time off gave him the opportunity to think about what he wanted to do; he knew he wanted to work for himself, to cook and provide “artistic,” good food. He likes to experiment, he said.

Roley cooks out of the Maya main kitchen — with a stove he bought himself — and plates in a back room. He does it all, he said, though sometimes his sister helps with transactions on busy days.

Roley said he approached Maya owner Shaun North about The Feed and the two hit it off. Both are passionate about downtown Logan and making it a destination — for not only tourists, but locals too, Roley said.

Roley currently mans The Feed full-time, cooking Wednesday through Sunday each week. Its menu changes each time and is usually posted on its Facebook page at the beginning of each week, and he takes cash or card upon pickup.

The Feed’s menu changes each week, and is usually posted on Sunday or Monday. Roley likes to bring a little bit of everything to Logan; he’s cooked South African cuisine, German cuisine, American comfort food and even fine dining.

“I’m serving all this out of a box,” Roley said. “So it’s kind of weird — like I served Beef Wellington and I’m sure (that’s) been done before, but it’s not typically something you want to do, but it turned out great.”

When asked if he’s making fine dining accessible, Roley replied, absolutely. “Because I do have regulars that come in every single week and order multiple days. So there’s that need there,” he said. “And also, the gratitude from those people for having something (to eat) that they can be proud of.”

Roley’s relationship with his customers – and even strangers – is one that is professionally fulfilling. Following his appearance on NPR, people from across the country reached out to tell Roley about their enthusiasm for his business, as well as the Hocking Hills.

A comment by Cyndy Langridge on Facebook post by The Feed about its NPR appearance reads: “Hi! I heard you today in Raleigh, North Carolina; we’ll be heading north later this year on a little camping adventure, and I can’t wait to stop in to have a meal... Love your ideas and platform and most of all your menu descriptions (yum!)”

Feedback like this means the world to Roley, he said: “It takes a lot for somebody – a lot of times – to send that positive vibe, or a lot to say, ‘Hey, I heard about you, I think what you’re doing is great, and we appreciate it.’ Like, you don’t even have to have access to (The Feed) and you’re still reaching out. So that really means a lot.”

The Feed is Roley’s sole focus at the moment, but he has high aspirations for creating a culinary world in Hocking County.

But The Feed is not the only ghost kitchen in the Hocking Hills.

Knights of the Kitchen Table, by owners Juanita Geiger and Kevin Knight, operates in the basement of The Olde Dutch Restaurant, 12791 OH-664. It was born out of a love for food — and necessity, Knight and Geiger told The Logan Daily News.

Knights of the Kitchen Table began in February. In short, Knight had leftovers — a large batch of bourbon chicken — and the next day, the need for a necessary household appliance: “Essentially, we got started because our hot water tank went out.”

Prior to the tank’s demise, the couple made a batch of bourbon chicken big enough to feed their six kids — who actually were away visiting other family at the time. They then posted the leftovers on Facebook and later delivered them to a friend, who tipped them $10.

The next day, the tank went out; however, the idea that they could cook homemade meals, deliver them and fundraise for a new tank via donations was born. And word spread – fast.

Within the first week of orders, thanks to donations, the couple secured a new hot water tank.

COVID was in “full swing” following the winter of 2020 and Knight had worked at the Olde Dutch for almost 17 years then; its business and employees were hurt by the pandemic, and it was closed for about two months. Like Roley, Knight found himself at a crossroads.

“Everybody was on hard times – their savings accounts were dwindling,” Knight said. “This whole thing happened just because we were in a situation where we didn’t have any savings. And we had a situation without warning – just randomly – and we didn’t have the funds to be able to replace (the tank) immediately.”

Knight went on to describe the eponymous Knights of the Kitchen Table as an “accidental” ghost kitchen. It moved into the Olde Dutch basement, and now rents the space and operates under its license, Knight said.

Geiger said she quit her previous job to work full-time for the kitchen. She runs the kitchen now, cooks and does paperwork. She’s also hired her mom and uncle to help out. Knight was working five days a week at Olde Dutch and three in his kitchen, until he was recently offered a general manager position at Olde Dutch.

In total, since it began, Knights of the Kitchen Table has served over 5,000 single servings. The kitchen has also helped the couple pay for car repairs, they said. It is also an LLC.

Many of Knights of the Kitchen Table’s dishes are family recipes, Knight said. Its menu features fried pickle chips, waffle fries, jasmine rice, fried Oreos and more, but its most popular dish is its hallmark bourbon chicken, which uses a different preparation method than most other kinds: “There’s just a flavor to it that people that ever can’t get anywhere else and that’s what made it so attractive,” Knight said.

Geiger described herself as a “naysayer the whole time”; she wasn’t sure about venturing into the ghost kitchen world, given the couple’s six kids and financial circumstances. Food industry is hit-and-miss as it is – but Knights proved her wrong the entire time, she said.

“I have been in the restaurant industry now for almost 20 years and, I don’t know a lot of research, but I’ve never seen a restaurant get started this rapidly by accident,” Knight said.

Ultimately, Geiger and Knight attribute their success to the people of Hocking County: “(Logan) was just very supportive of the idea behind (our) development... We raised almost 2,000 followers on the Facebook page in a month or two... that’s almost 25% of the town,” Knight said.

“I think what really helped us though was — it’s gonna sound corny as crud but it’s absolutely true — it is Logan being a small, tight-knit community it is,” Geiger said. “They saw we needed help, and they helped.”

Both Knight and Geiger have high hopes for their businesses and are working toward achieving either a commercial space or food truck. The search for a place to open a storefront has been difficult, they said. Food trucks are expensive – and have gained popularity during the pandemic, causing prices to surge, Geiger explained.

But until then, the kitchen is going to keep doing what it’s doing, and ultimately with the goal of becoming an established local eatery – “a Logan staple,” Knight said.

“My grandfather had a business downtown for years,” Knight said, adding that it was Jim’s Barber Shop, 312 W. Main St. “When he finally retired and sold his building – my goal was to just hopefully put my thumbprint back in the town.”

Knight said having his own restaurant has always been a dream, in a part of him. But Knights of the Kitchen Table was indeed borne out of necessity; not out of planning or preparation: “It wasn’t really a choice I was able to make, it was a choice that everybody else made for us,” he said.

To Knight, his business is evidence of the American Dream.

“It’s cool to see in 2022, 2021, that Americans could still do the American dream, small businesses can make it and grow even from nothing,” Knight said. “There’s so many people that are still just that — they don’t believe that dream exists anymore. And I feel like, yeah, we’re living proof that the American Dream is still possible, you know... with enough faith and passion.”

Knights of the Kitchen Table will be at Brewery 33, 12684 College Prospect Drive, this Saturday, Aug. 21 and Monday, Aug. 23. More information can be found on its Facebook page at www.facebook.com/KnightsoftheKitchenTable and its website at knightsofthekitchentable.square.site/. Roley and The Feed can be contacted on Facebook at www.facebook.com/TheFeedLogan.