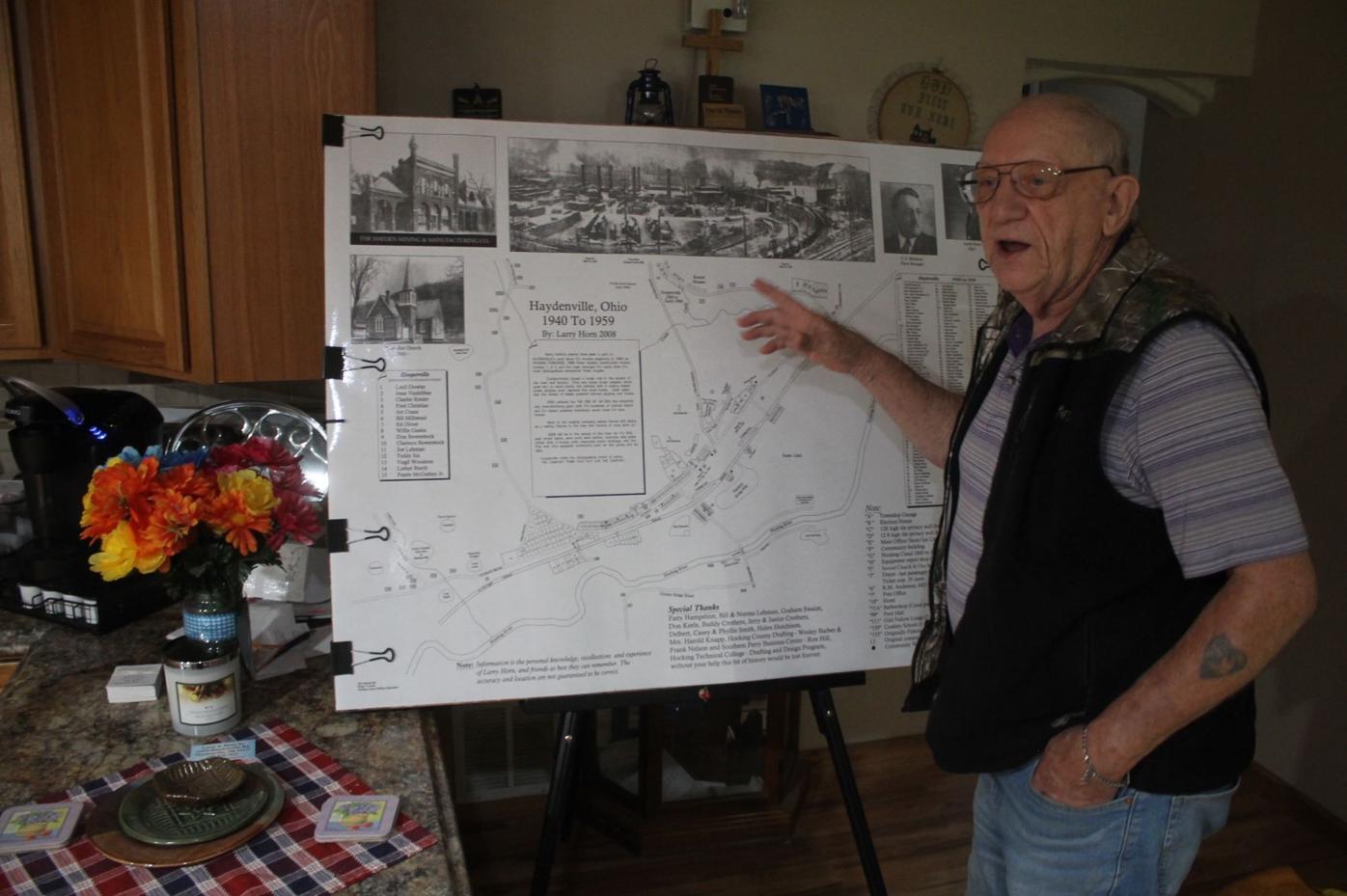 Larry Horn, Sr. points out some key locations in and around Haydenville on an historic map he has created. 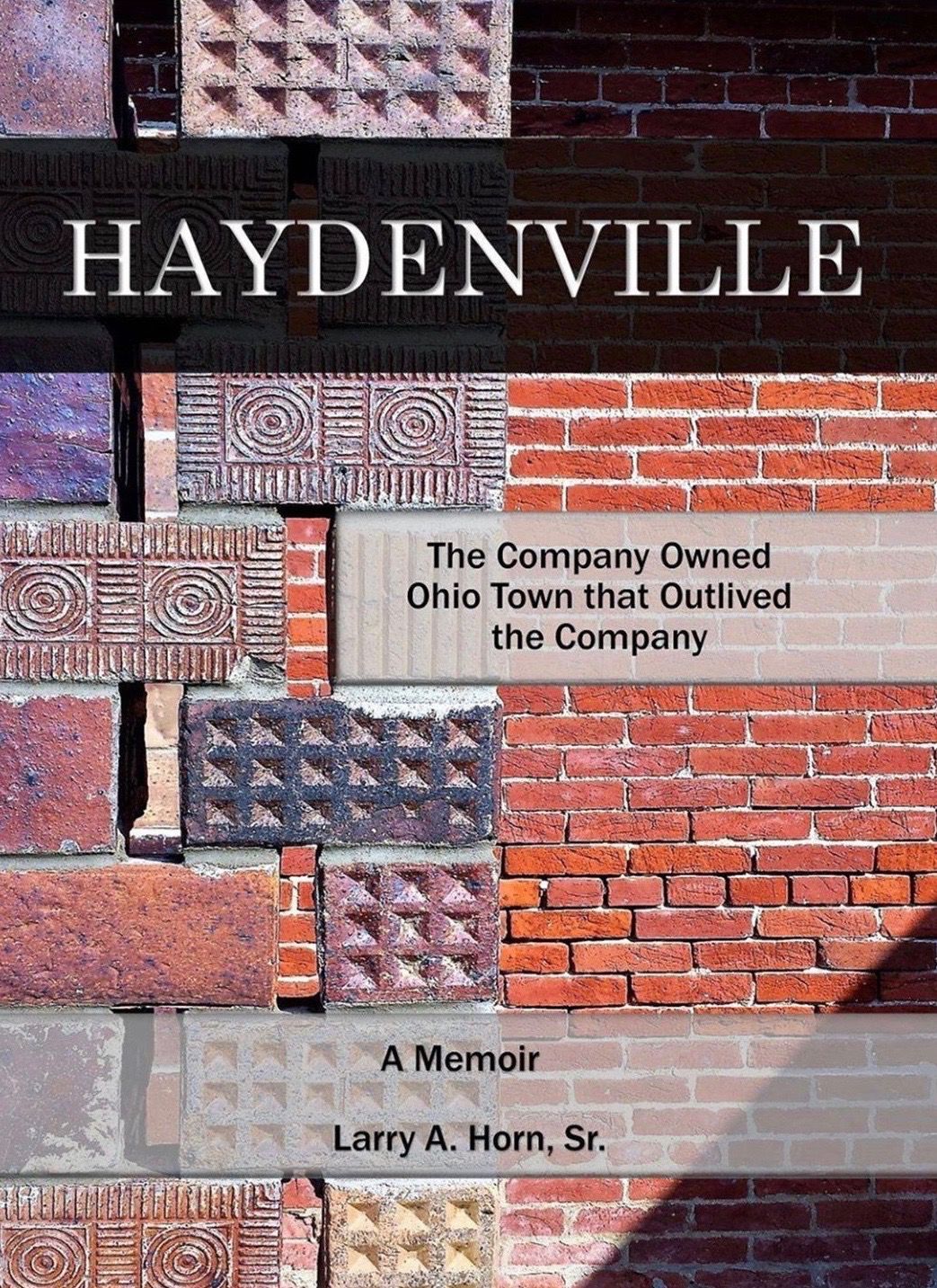 Larry Horn, Sr. points out some key locations in and around Haydenville on an historic map he has created.

HAYDENVILLE – Larry Horn, Sr., jokes that in the tiny unincorporated community of Haydenville where he grew up and still lives, he holds a number of important, if unofficial, positions.

“I’ve got many titles,” he says. “I’m the mayor, the dog catcher, the service department, the project engineer, and ‘Hey Larry, got a couple bucks till payday?’”

Now he can add town historian to that list. The Buchtel-based Monday Creek Publishing has recently brought out his book, “Haydenville: The Company Owned Ohio Town that Outlived the Company.” In the volume, which is built on years of extensive research among deeds and cemetery records, as well as the shared recollections of some of Haydenville’s older residents, the 82-year-old Horn has captured, in bits and pieces, the story of a singular place – preserving history that, with the passing of a few more years and people, might have been lost forever.

“I’m a title abstractor – I research (real estate) titles,” he explained. “And I’ve come across so many old towns that are just gone – they don’t exist anymore. So I grew up in this town, and I thought, ‘My family’s here and all; I’ll make sure Haydenville’s not forgotten.’”

As his book’s title suggests, Haydenville began as a company town – the company in this case being the Hayden Mining & Manufacturing Co. (HM&M Co.), which at various times made its profits from iron ore, clay products, coal and canal boats, all under the direction of 19th-century Columbus entrepreneur Peter Hayden. (Fun fact: Before there was a Haydenville, Ohio, there was a Haydenville, Massachusetts, built around the industrial activities of Peter’s brothers, Joel and Josiah.)

Milestone moments in the town’s history include the opening of the Hocking Canal from 1832-42; by 1850 or earlier a Green Township plat map was showing the Hocking Valley Iron Co. with its smelting furnace, and the S.S. Mills stone quarry. By 1883 Hayden had bought up over 2,000 acres of land in Hocking County’s Green, Ward and Starr townships. He built a railroad to haul both passengers and freight, especially coal. In 1882, having found clay under the coal seams in his mines, Hayden began building a factory to turn out building tile, terra cotta and bricks. His company, HM&M Co., was formed the next year, and he began forming a village around it that would become Haydenville; this included building an office complex/company store and housing – made of the company’s red brick – for its employees.

Horn grew up in one of these company houses and still lives in one, which he has restored. “They rented the houses to you; they were like, $7 a month,” Horn explained. “They had repair crews to maintain them. And if you wanted to wallpaper your house you would tell them, and they would give you the wallpaper to do your house with.”

There was also a company store, in which Horn worked as a kid. He says the store didn’t fit the notion of a predatory operation meant to keep workers in perpetual debt to their employer, as portrayed in the old song “Sixteen Tons.”

“People think of ‘I owe my soul to the company store.’ But that wasn’t the way it was,” Horn insisted. “The company did not intend to make a profit from the store. Everything that was sold was a good product at a fair price.”

Peter Hayden died in 1888, and his company was sold in 1902 to the National Fireproofing Company of Pittsburgh, later known as the National Automatic Tool Co., or NATCO. The depleted coal mines shut down in 1934, and the clay mines followed in 1957, leading to NATCO factory closures and worker layoffs. The company sold Haydenville in 1961 to a real estate investor; many of the company houses were bought on land contract by former company employee/renters.

Horn’s book is a jumbled grab-bag of facts, stories and documents, giving fascinating glimpses into religion, education, work, community spirit, and just generally what everyday life was like in Haydenville during its company town days and beyond. It includes informative primary records, such as a long letter written by a Hocking County woman born in 1881, recounting her life experiences, or a (fairly demanding) 19th century “ninth-grade proficiency test” that rural students had to pass to qualify for high school.

Other sections of the book make history more personal; one chapter, for example, documents the nicknames of scores of Haydenville residents, from “Fuzzy” to “High Pockets” to “Peanut.” Another, titled “Tragedies, Grief and Sorrow,” lists various noteworthy deaths, injuries and accidents that have befallen local people over the years. It notes that when a tragedy occurred the company’s main whistle would blow, work would stop, and everyone would rush to the company office building to hear the bad news.

“When the tragedy involved one of the workers the town, keeping with tradition, became one family,” Horn writes. “Volunteers automatically took over the everyday chores of the grieving family and the church extended spiritual strength, with no questions asked.’

Writing “Haydenville” is only the latest venture on behalf of his hometown for Horn. He has long been active in promoting and improving the community; he helped bring street lights to Haydenville in 2008, for example.

It’s clear in talking to Horn that for him, the spirits of Haydenville’s past are all around. Perhaps even literally so; at one point he mentions quite matter-of-factly an experience he had while doing research at Haydenville Cemetery in October 2011.

As recounted in the book, some movement at the edge of the woods got Horn’s attention. He looked up and, to his amazement, saw two boys and a girl, about 10-12 years old, the boys dressed in long pants and long-sleeved shirts, and the girl in a full-length dress. As he watched, the children drifted into the woods, in an area far from any houses. He drove around looking for them, but without success. A few years later, he says, he saw the little girl again in another location, watching some children play.

Horn has his own idea of who these mysterious children might have been – past residents of Haydenville, still lingering in their old hometown.

“I’ve got three little ghost friends up there (at the cemetery),” he says – before adding with a smile, “But if they asked me to come join them, I think I would turn them down.”