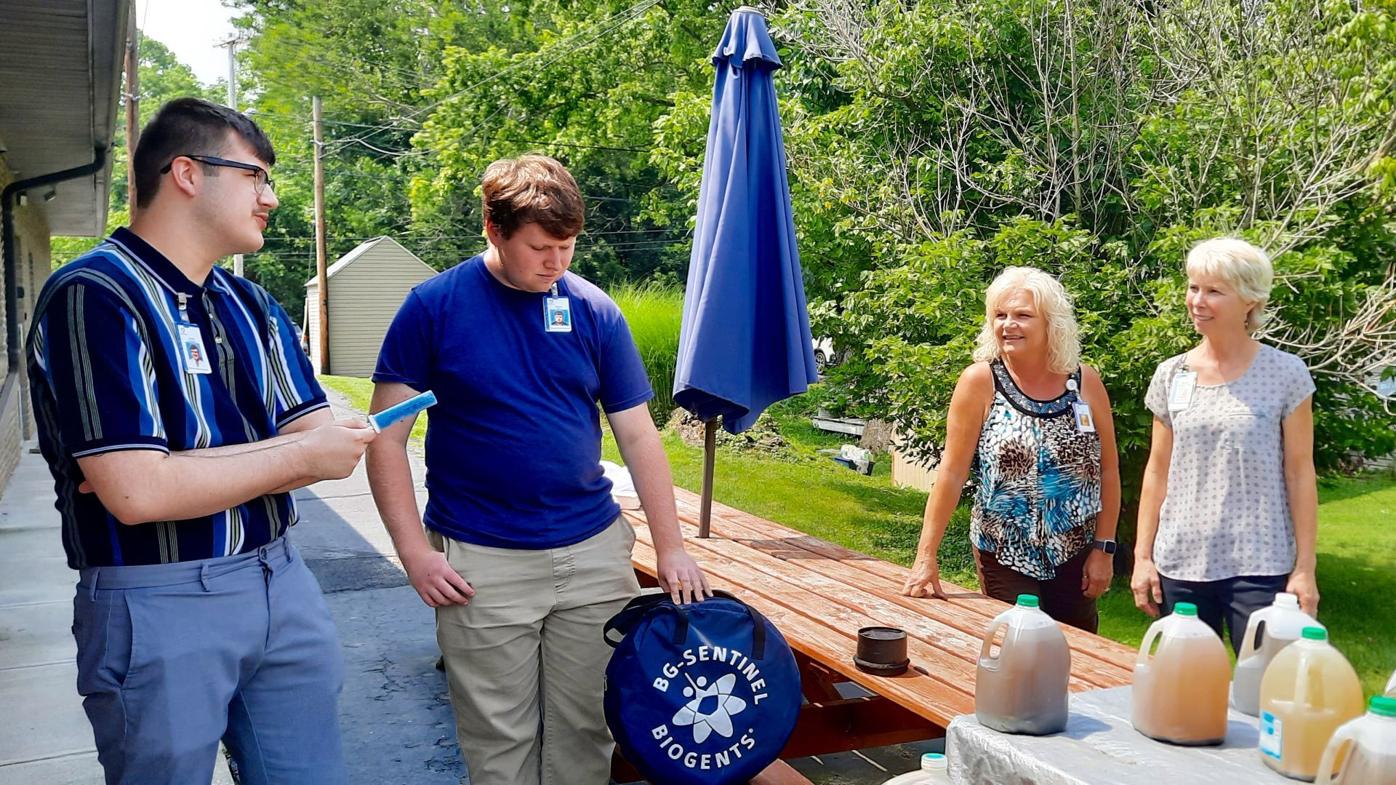 A screenshot taken Wednesday of a map showing mosquito trapping sites in the county.

A screenshot taken Wednesday of a map showing mosquito trapping sites in the county.

LOGAN — Two Ohio University students have teamed up with the Hocking County Health Department (HCHD) as interns to help monitor mosquito-spread diseases in the county.

HCHD Director of Environmental Health Wendy Hanna and interns Wesley Walsh and Jacob Thompson have spent the summer setting traps, collecting mosquitoes and testing them for the West Nile virus (WNV), among other vector-borne diseases.

According to the Centers for Disease Control and Prevention (CDC), WNV is the leading cause of mosquito-borne disease in the country. About one in five people who are infected develop a fever and other symptoms and about one out of 150 infected people develop a serious, sometimes fatal, illness. According to the Ohio Department of Health (ODH), WNV has been established in Ohio since the early 2000s.

The county’s monitoring project is possible thanks to a program that began in 2017 through an Environmental Protection Agency (EPA) grant. This year the project received around $24,000 in funding, which helps pay the interns’ wages and work expenses, Lisa Hall, HCHD environmental technician, said.

Traps are primarily placed in places with higher population density, like urban areas or campgrounds, and hotspot areas, like wetlands, Walsh said. Mosquitos like the smell of sewage; so, naturally, their bait is made from fermented rabbit food. The health department asks the public to leave the traps undisturbed.

According to ohiohistorycentral.org, there are 60 different species of mosquitoes in Ohio, but not all of them bite; only about six species, Hanna said. Others are pollinators or eat other insects, including fellow mosquitoes. Only female mosquitoes bite, Thompson added.

The county looks for three main species, Thompson said: Aedes, Culex and Anopheles. The Culex is of special importance, as it can carry WNV.

The Aedes can carry the Zika virus, and Anopheles can carry malaria, he added, though neither is of particular concern in Ohio, as they usually are seen via travel.

Other diseases that may occur locally in Ohio are Eastern equine encephalitis, La Crosse, and St. Louis encephalitis viruses.

Traps are set and collected every 24 hours, keeping the interns busy each morning. Once collected, sample water full of mosquito larvae is brought back to the health department. The larvae are then placed in a container until they emerge as adults, and then are eventually tested for disease.

“They all emerge when you collect them — about a week — into just a swarm of them,” Walsh said. “So all we do is we just put them in the container we collect them from, give them a bit of sugar water and then let them accumulate until they have enough to test ... (The containers) get full fast.”

Each biopsy is supposed to have 15 to 20 mosquitoes. About 100 mosquitoes are used per test, Walsh said. One sample came from a bucket left behind a gas station; another came from an overturned canoe that held 50 gallons of water.

“And if we have a nice container, we could use up the ones that have emerged in one day. And then in two days, there’s enough to run another test,” Walsh said. “They just keep coming once you have (them).”

The mosquitoes don’t have to be alive to be tested. “We don’t care about their well being, we just care about not wanting the viruses inside of them (to) degrade,” Walsh said. The small insects are fragile, too, Hanna added, therefore they must be refrigerated after death.

If WNV is found in Hocking County, the health department informs the state and local media. If there’s one mosquito that tests positive, it must be assumed that there are more, Hanna said. Mosquitoes can travel up to three miles in one night, Walsh said.

“You need to always look at every mosquito (as if) it could have it,” Hanna said. “So you always want to take precautions.”

According to a previous Logan Daily News report, the health department reported WNV in Hocking County in 2018.

According to the CDC, the best thing for people to do to avoid WNV is to avoid mosquito bites; use insect repellent, wear full-coverage clothing and try to limit exposure to areas with stagnant water. Mosquitoes can breed in water less than an inch deep, Walsh said. Hanna said that sometimes they live in spaces as small as bottle caps.

“An ounce of prevention is worth a pound of cure,” Walsh added.

Hanna stressed that though mosquitoes can carry disease, 95% of vector-borne diseases are spread by ticks. The Logan Daily News recently reported on a Good Hope Township man, Jim Fry, 80, who survived tick paralysis caused by a dog tick.

However, the best prevention is education, Hanna said. The team noted that many people they’ve encountered weren’t aware of the dangers of standing water.

Walsh and Thompson recalled a recent encounter with a Hocking County man who survived WNV as a child; however, he didn’t know that standing water, especially in dark areas or objects, like tires, attract mosquitoes.

“Tires are a big one,” Walsh said. “If you have tires, you need to cover them with something because once the water gets in, you can’t drain it (out.)”

Along with diseases, the health department is also testing mosquitoes for pesticide resistance. Insects can quickly become unfazed by pesticides after habitual use, like the way bed bugs have developed resistance for neonicotinoids. Luckily, there’s a solution.

“But if they are resistant, we can put them in with an enzyme inhibitor and figure out how exactly they’re resistant,” Thompson said. “And then mixing those inhibitors with pesticide can make them effective again.”

Other methods of population control, such as larvicides, may also be used in place of pesticides.

Walsh, a rising OU senior studying marine, aquatic and environmental biology, and Thompson, a rising OU sophomore studying heard about the opportunity through OU faculty, they said. They expressed their enthusiasm for their internships.

“Professionally, this has been exciting because it’s my first chance to actually apply things I’ve been learning in school, outside of the environments of doing things with professors,” Walsh said, adding that the internship suits his major. “It’s also monitoring something you can really, easily get people to care about, because nobody likes getting bitten by a mosquito.”

For Thompson, as a pre-med student, the internship provides a glimpse into the world of epidemiology. “It’s like dipping my toe in the water of health — (like) epidemiology, so we can help people,” he said.

Both Walsh and Thompson noted that their internships make for an unusual summer gig.

“As someone who is usually working summer jobs at a fast food restaurant, this is definitely way up,” Walsh said.

Hanna and the mosquito team have fun. She noted with pride that Thompson and Walsh presented for 45 minutes at the health department’s annual contractors’ workshop, a first for interns.

“I heard several (attendees) say, ‘well, these are the best speakers we’ve had so far,’” Hanna said. “So that was quite a compliment.”

As the effects of climate change worsen, mosquito populations will spread north, therefore testing projects like this one will become more important. The warmer it gets, the further they spread, Walsh said.

Mosquito populations usually die down mid-Autumn, Walsh said. Like other kinds of insects, they migrate in the winter. According to the ODH, mosquito season ends in October.

Hanna encourages those with concerns about standing water and potential mosquito problems near their homes to find more information online at www.hockingcountyhealthdepartment.com/HCHD-Mosquitoes-Ticks.html or contact the agency itself.