There were 19 volunteers that have received scholarships through BYF. As part of the award, they are asked to perform some community service, and chose to help serve at the breakfast. 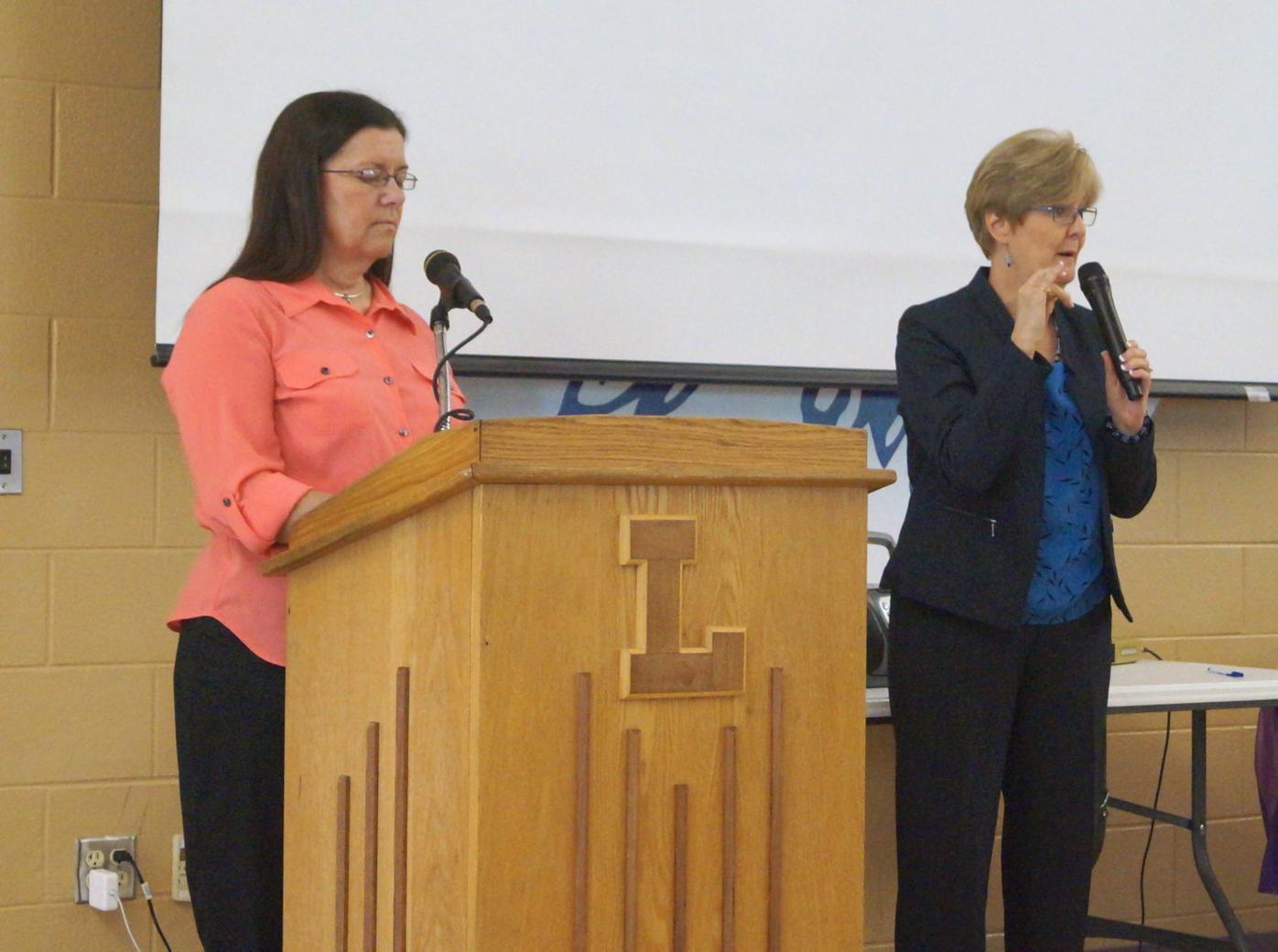 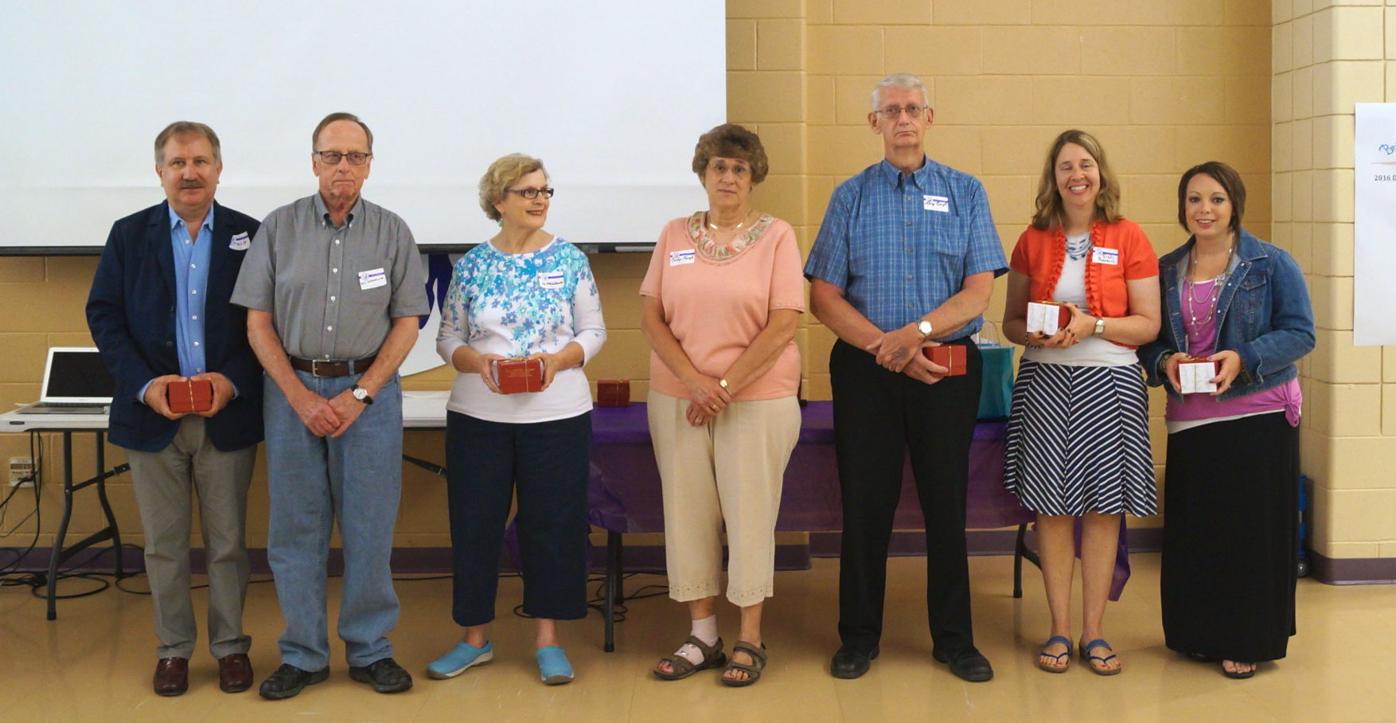 To wrap up the BYF alumni breakfast, the alumni sang the original lyrics to the LHS Alma Mater: Hail Logan High School, high on the hill, thy aims, thy purpose, higher, higher still. To thee with grateful hearts, proudly we sing, to you our loyalty and love we bring.

There were 19 volunteers that have received scholarships through BYF. As part of the award, they are asked to perform some community service, and chose to help serve at the breakfast.

To wrap up the BYF alumni breakfast, the alumni sang the original lyrics to the LHS Alma Mater: Hail Logan High School, high on the hill, thy aims, thy purpose, higher, higher still. To thee with grateful hearts, proudly we sing, to you our loyalty and love we bring.

LOGAN — There was a flurry of familiar faces on Saturday as Brighten Your Future sponsored the 37th annual Logan High School Alumni Day.

Brighten Your Future was established in 1988 by George and Lucy Shaw to assist Logan High School graduates in continuing their education by providing financial assistance based on need.

The Bell Award is presented to recognize donors that have given between $1,000 and $4,999. This year, nine individuals or couples were awarded the Bell Award:

Bill and Kay Hebblethwaite have lived in Logan since 1982. Bill is a retired funeral director and Kay is a retired teacher. They have five children; Michael, Carla Williams, Steven, Nancy Holbrook, and Johanna McIntosh. Nancy and Johanna graduated from Logan High School. Bill and Kay support BYF because they feel that the future of our country and community lies in our youth, saying, “We struggled for an education, therefore wish to help others to ease a little of the financial burden.”

Unable to attend, Bruce and Lou Ann Jones live in Columbia, South Carolina, where Bruce currently teaches math at the University of South Carolina and Lou Ann provides care full-time for their two grandchildren. They have two children: Douglas Jones-Graham of Fort Collins, Colorado, who graduated from Logan in 2001 and Doreen Jones Rinehart of Columbia, South Carolina, who graduated from LHS in 2003. Bruce and Lou Ann give to BYF because BYF helped their children with aid for college and they want BYF to help other families.

Larry and Carolyn Kienzle were also recognized with the Bell Award. Larry is a long-time member of the Board of Trustees of Brighten Your Future and serves as the treasurer. He is a retired banker and he and his wife, Carolyn, have two sons, Brian and Kevin. Carolyn graduated from Starr-Washington High School in Union Furnace and Larry graduated from LHS in 1965. Larry and Carolyn have always been strong supporters of civic organizations in the community.

Jerry W. McDaniel is a well-established artist. He was born at a farm on Rabbit Ridge near Union Furnace, in 1935. After graduating from LHS in 1953, he was awarded a scholarship to The Columbus College of Art and Design where he graduated as Class President in 1957. McDaniel said CCAD was the four greatest years of his life. He started his art career in New York City in 1957, and opened the J W McDaniel Studios in 1961. McDaniel has shown his art in numerous exhibitions and his original work in many collections including The Metropolitan Museum of Fine Arts in New York, the Smithsonian, and The U.S. Air Force Art Collection.

Ed and Debbie (Shaw) Penrod, who were unable to attend, both graduated from LHS. Ed is a member of the Board of Trustees for Brighten Your Future, a member of the Logan-Hocking School District Board of Education and the President of the Ohio School Board Association. Debbie retired from teaching at Lancaster City Schools and currently teaches part-time for Logan. Debbie and Ed live in Rockbridge and have two sons, Austin and Alex.

Magdaline Weiland Rieser passed away in 2014 and resided in Canal Winchester at the time of her death. Rieser graduated from LHS in 1929 and also from Mt. Carmel School of Nursing. She received a BSE from Ohio Dominican University and MA from The Ohio State University. She began as a nurse in 1934 and spent 35 years in nursing education and administration. Reiser was married to her husband, Harold, for 35 years until he passed away in 2002, and has one daughter and son-in-law, Tricia and Mark, a sister, Rose Crane, and many nieces and nephews. Reiser always believed that education was the key to fulfillment. Education opens doors, gives life purpose and leads to a life of helping others. She was represented at the breakfast by her daughter, Tricia Ranalli.

Amanda (Howdyshell) Stivison is an example of how Brighten Your Future helps LHS grads, and how recipients can become an integral part of the Logan-Hocking community.

“I believe in giving back to the community that meant so much to me growing up and paying it forward,” said Stivison. “BYF was such a big help during my five years as an undergrad student at Bowling Green and Ohio University. It allowed me to make last minute needed purchases such as textbooks and supplies. I feel that everyone should have the opportunity to select a post-secondary option, if they choose, BYF makes it possible.”

Stivison graduated from LHS in 2000, Ohio University in 2005, Ohio State School of Cosmetology in 2006, and received her Masters Degree in Education from Muskingum University in December 2014. She now resides in Logan, and teaches fourth grade at Hocking Hills Elementary. Stivison is married to Israel Stivison and they have a five-year old daughter, Kenna. Stivison is the daughter of Lee Howdyshell and Melissa Whitcraft, and donates through LHSD’s payroll deduction program.

Marian Tansky resides in Logan, and will turn 98 on June 26. Though unable to attend, she graduated from high school in Michigan in 1936 and met her late husband, John, founder of Tansky Motors, while drinking soda at the Tally Ho Restaurant at Western Michigan University in Kalamazoo.

Tansky taught school in a one-room schoolhouse before the war. John had three-and-a-half years of college when he was drafted into the Army. John went to Army school to work on airplanes and Tansky began working for RCA in New Jersey on a top-secret project working on radar. This radar helped the United States locate submarines and this technology helped to turn the tide in WWII. The couple had had seven children, with six surviving.

According to Tansky’s son, Stosh, who represented her at the breakfast, he still takes her out at least once a week for martinis.

Katie graduated from LHS and was a registered nurse who worked in the OB-GYN department at St. Luke’s Hospital and University of Iowa. She and Reid married on June 8, 1952 in Lancaster, and are the parents of four children and five grandsons. Katie and Reid delighted in traveling all over the world and throughout the United States.

The Apple awards were presented to recognize donors who have donated between $5,000 and $9,999. This year, two individuals were recognized for their incredible generosity.

Don Poling, though unable to attend, graduated from LHS in 1952. Poling began donating through the efforts of Marge Dollison and the LHS Class of 1952 during their class reunions and gatherings. Last year, the LHS Class of 1952 achieved the “Named Grant Award” and Poling continues to be a generous donor to BYF. Poling sent a message to the volunteers at BYF; “I can think of nothing more important than the education of our youth, if we are to survive this world! This is a good cause.”

Ruth Ann Spatar graduated from Starr-Washington High School in Union Furnace in 1965. Spatar retired as a teacher and principal from the Logan-Hocking Schools after 33 years of service and after her retirement, worked three additional years with Wellston City Schools. Spatar has one son, Sean, who graduated from LHS in 1988 and is a Sgt. Major in the U.S. Marines Corp.

Her grandson, Braeden Spatar will be a freshman at LHS next year. Spatar likes being able to help and support LHS graduates, and she also volunteers at Hocking Valley Community Hospital and serves of their board of trustees and also serves on the board of the Hocking County Health Department. Spatar is a real estate agent with Dennis Real Estate and loves to travel the world.

The Trustees Award for Exceptional Generosity is reserved for those who have donated a cumulative amount of $10,000 or more to Brighten Your Future. In addition to the award, those who have reached this level have a grant given out every year to an LHS graduate. This year, there were three donors to reach the level of Named Grant.

John E. (Ned) Krieg passed away peacefully in his home, surrounded by his children, on April 14, 2016. Krieg was the eldest of three children. He graduated from LHS in 1945, and entered The Ohio State University, but after two quarters was invited to join the US Army, where he studied radar systems and served as a radar technician at the Pentagon. Following military service, he re-entered OSU, graduating in 1952 with a B.S. in Physics.

Krieg was preceded in death by his wife of 63 years, Margaret “Peg” Krieg. The couple had five children: Christina, Fred, Steve, Hope and Lou Ann. A lifelong member of the Presbyterian Church, he loved God, had an unashamed faith, and an awe of this magnificent universe. His children and grandchildren adored him, being thankful always for how he inspired and encouraged them, for the example he set in integrity, love, joy, enthusiasm, patience, kindness and diligence. He was represented at the breakfast by his sister, Margie Dollison, and his son Fred.

Dan Matheny passed away in October of 2011 at the age of 68, and his family has established a BYF Named Grant to honor his memory. Matheny graduated from LHS in 1961, which is celebrating its 55th reunion this year. While at LHS, Matheny participated in football, track, Varsity L, Key Club, National Honor Society, Student Council, World History Scholarship Team, Teen Timers and served as the Freshman Class Vice President and Junior Class Treasurer.

After graduation, he received his degree in sociology from Ohio University and his master’s degree in social work from The Ohio State University. Matheny spent his career in the child welfare and mental health fields. His wife, Patsy, stated, “Dan loved growing up in Logan and his time at LHS. He valued education and was the first in his family to go to college, paying his own way by working in the OU cafeteria and grading papers for professors. He would be pleased that a scholarship in his name will help other Logan High School students attend college.”

The breakfast wrapped up with a picture trivia game, and the alumni sang the Alma Mater, with the original lyrics.