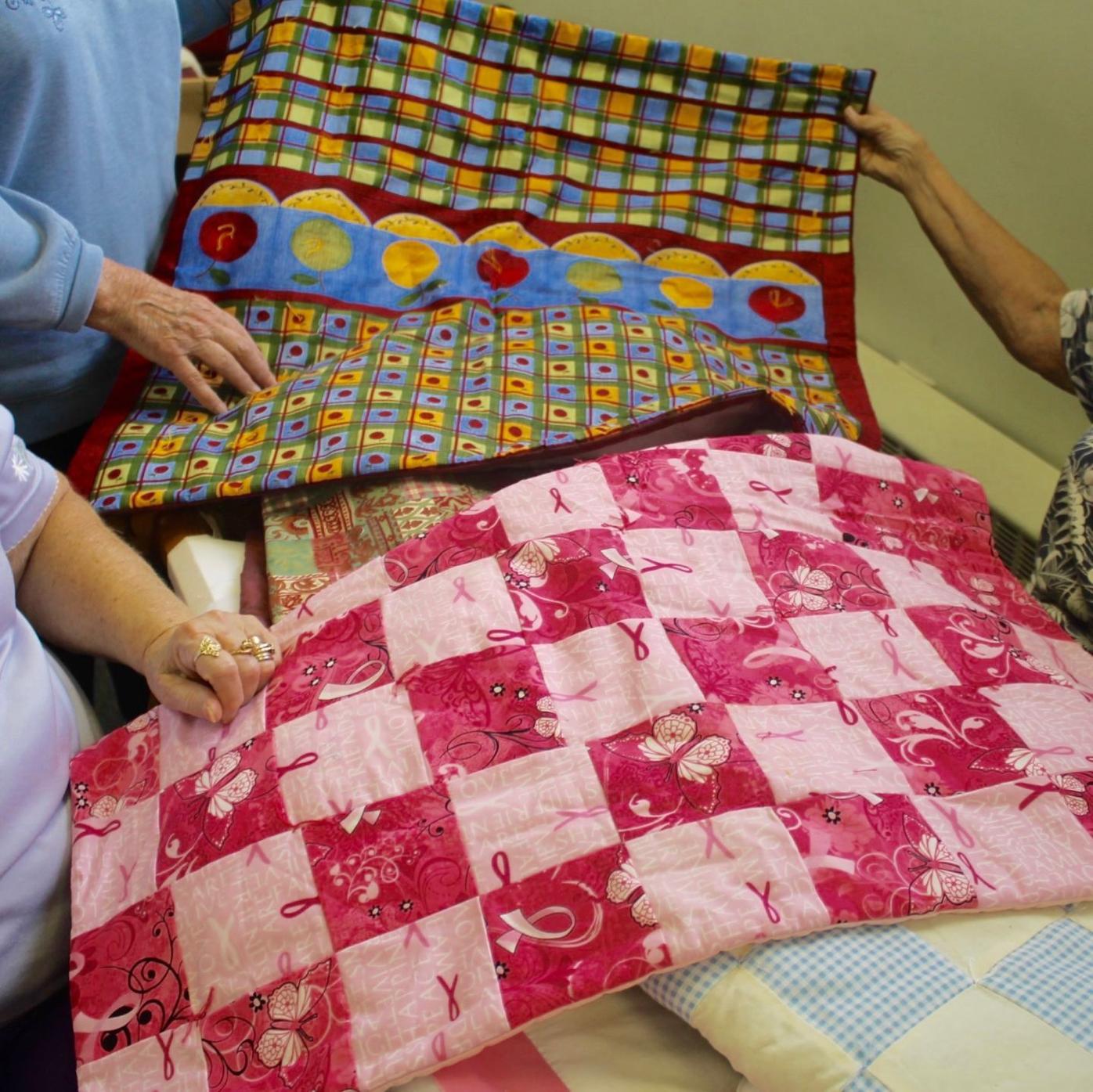 These quilts were donated to FAIRHOPE Hospice and Palliative Care. 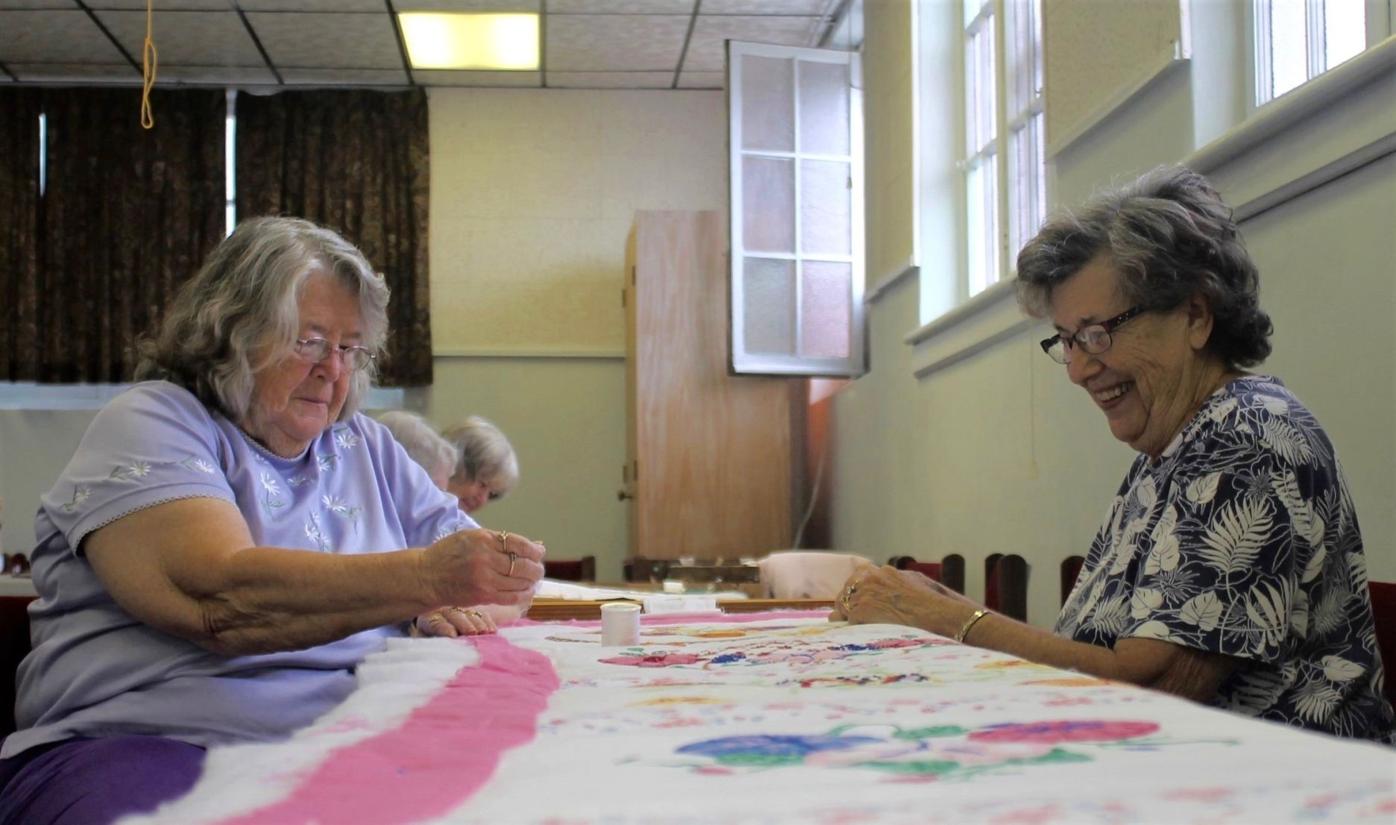 These quilts were donated to FAIRHOPE Hospice and Palliative Care.

LOGAN — On the second floor of Hocking Valley Industries (HVI), 66 E. Hunter St., you’ll find a back room. To reach it you must walk through the former Immanuel Methodist Church, resplendent with stained glass, and now sitting in silence. When you get to the room, you’ll find a floor littered with string, scrap fabric, and perhaps a few drops of blood.

A half dozen women, all from Logan, sit skillfully laboring, stitching and bantering. Each Wednesday, some arrive early, waking up at the crack of dawn, while others, like Jolene Harden, indulge in the luxury of sleeping in. Around 9 a.m. Harden joins them, and together, they quilt — sometimes into mid-afternoon.

The Wednesday morning quilt group had its decades-ago origins at other former churches. It began at Trinity Methodist Church with a large group of almost 30 women. Now, six to eight members regularly attend; all senior women of faith, and most from Logan.

The group members share a lot in common; most, not all, are Logan born-and-bred, and retired; some are widows, while others are still married. They all share sharp wit and dry senses of humor, as well. Many are Logan High School alumni, and most have calloused fingers from years of quilting.

The group’s current incarnation is only about five years old, Harden estimates. It moved when HVI purchased the church; the group asked if it could continue working in the building, and the answer was yes, Harden explained.

Judy Kennedy, of Logan, began quilting in 1989 after she retired. Her grandmother quilted, but her mother never did. After her grandmother passed away, she left several unfinished quilts, which her mother wanted to throw away — and Kennedy kept them. Now, she estimates she quilts two to three hours per week at home. Others, like Harden, do additional kinds of crafts, such as crochet.

The women agree that quilting is something that “gets them in the zone,” as Harden put it. There is an official psychological term for this: “flow state,” when people become completely absorbed in the challenging yet doable activity they are performing — whether it be writing, sewing or even playing a game.

The weekly hangout was sorely missed during the brief time when it was suspended during the early days of the coronavirus pandemic, Harden said. For her, the group is a place where she can cut loose and relax. “We quilt, laugh and have a good time,” she said. “It’s a good pastime.”

Most of the women in the group are between 70–80 years old, Harden said. When asked if young people are interested in quilting, the group shared a collective chuckle: “No,” they said. “Most older people aren’t either,” Harden added. Kennedy said her granddaughter has shown interest in quilting, however, she doesn’t have much free time due to work.

The Logan Daily News last reported on the quilters (and their community service) in 2017, when they were operating in Hocking Hills United Methodist Church.

The group charges for quilt top restoration (rates vary per quilt size), but all of the money made either goes back into the group’s operation costs, or to charitable causes — during the Logan Daily News’ interview with the group, two members left to donate four lap quilts to FAIRHOPE Hospice and Palliative Care, Inc., at 96 W. Hunter St.

The group said it also helps furnish the Logan-Hocking Middle School’s closet; recently donated dog food to the Hocking County Humane Society, and supplies quilts to the Logan Women of the Moose lodge. The group also supports Shop with a Cop.

“We don’t see any (profit) — everything we do is for people,” Harden said.

According to the Encyclopedia Britannica, quilting dates back centuries. Not only is it a functional artform, but it is also a meticulous, resourceful exercise in design and craftsmanship. According to Appalachian State University, quilting also represents a folk tradition that is passed down by generation to generation.

Quilting, even in Logan, is indeed entrenched in tradition; patterns themselves are hard to come by, Harden noted, and historically have been passed down by family members within a lineage. Quilt patterns have folksy names; “Wedding Ring,” “Jacob’s Ladder,” “Grandmother’s Flower Garden,” among others. In the past, quilters also used fabric from feed sacks to build their blankets.

“They say — who are they? — if you get blood on your quilt — your blood — your spit will take it out,” one member said and laughed. Another chimed in: peroxide, too. “We have a debate on that, don’t we?” Harden joked.

When the group moved into the HVI building, it brought quilt racks dating back to the Trinity group (which it uses today). Quilt racks allow quilters to stretch and roll the materials for work. The group also brought boxes of scrap fabric.

For the uninitiated, quilts are essentially comprised of three layers: a top, which typically includes embroidery, appliques or designs; batting, the middle layer that provides insulation and determines “loft,” meaning the quilt’s thickness/puffiness; and backing, the final layer and, as implied, back of the quilt.

The group does not typically do binding, which is essentially hemming a quilt; the group will bind for an additional charge.

As far as quilt care goes, the ladies of Logan stress that quilts should be stored in cloth containers such as pillow cases (and not wooden chests); they also stress that quilts, if not on display, should be enjoyed and used. Quilts are items that last generations, and symbolize memories tied to its creators and even one’s ancestors, one group member commented.

Harden described how, sometimes, a quilt might seem quite unsightly at first — but once one begins to work on it, the quilt takes on a life of its own — and a mesmerizing one at that.

“It takes on a whole new dimension,” Harden said.

Harden cited an example of an individual whose mother moved into a nursing home and could not complete the quilt she began years ago; at her child’s request, the group finished it for her and the quilt was returned to its creator.

Depending on a quilt’s size, the group will work on a quilt for easily two or three months, Harden said. Quilters don’t have to be advanced sewers, one member said. Many group members joined the previous quilting group and have learned the craft over the years.

The group’s starting rates are listed below: