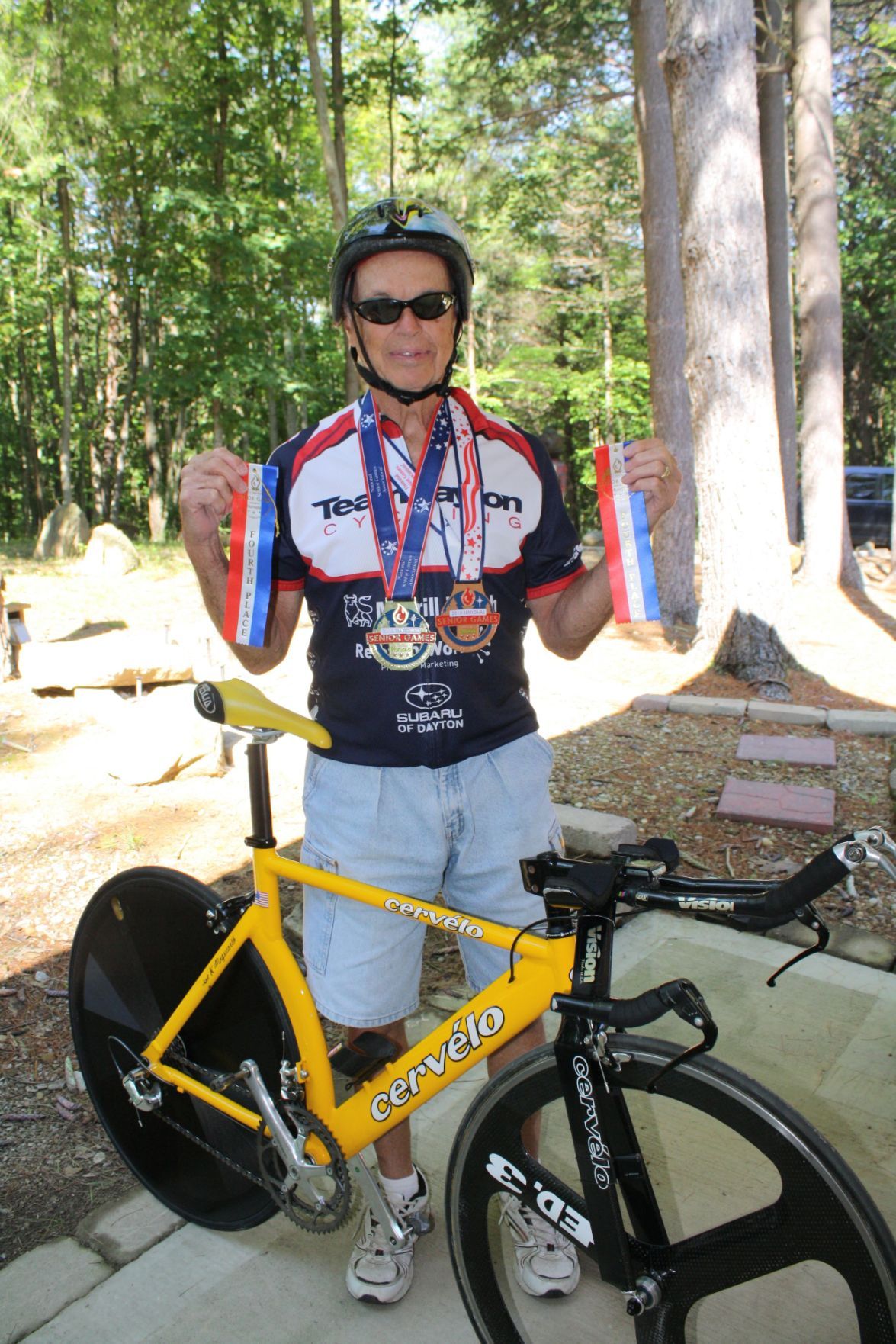 Gene Killingsworth of New Plymouth displays the multiple awards that he earned while competing in four cycling events at the Senior Olympics. He was presented a gold and bronze medal, as well as two ribbons for finishing in fourth place in two of the events. 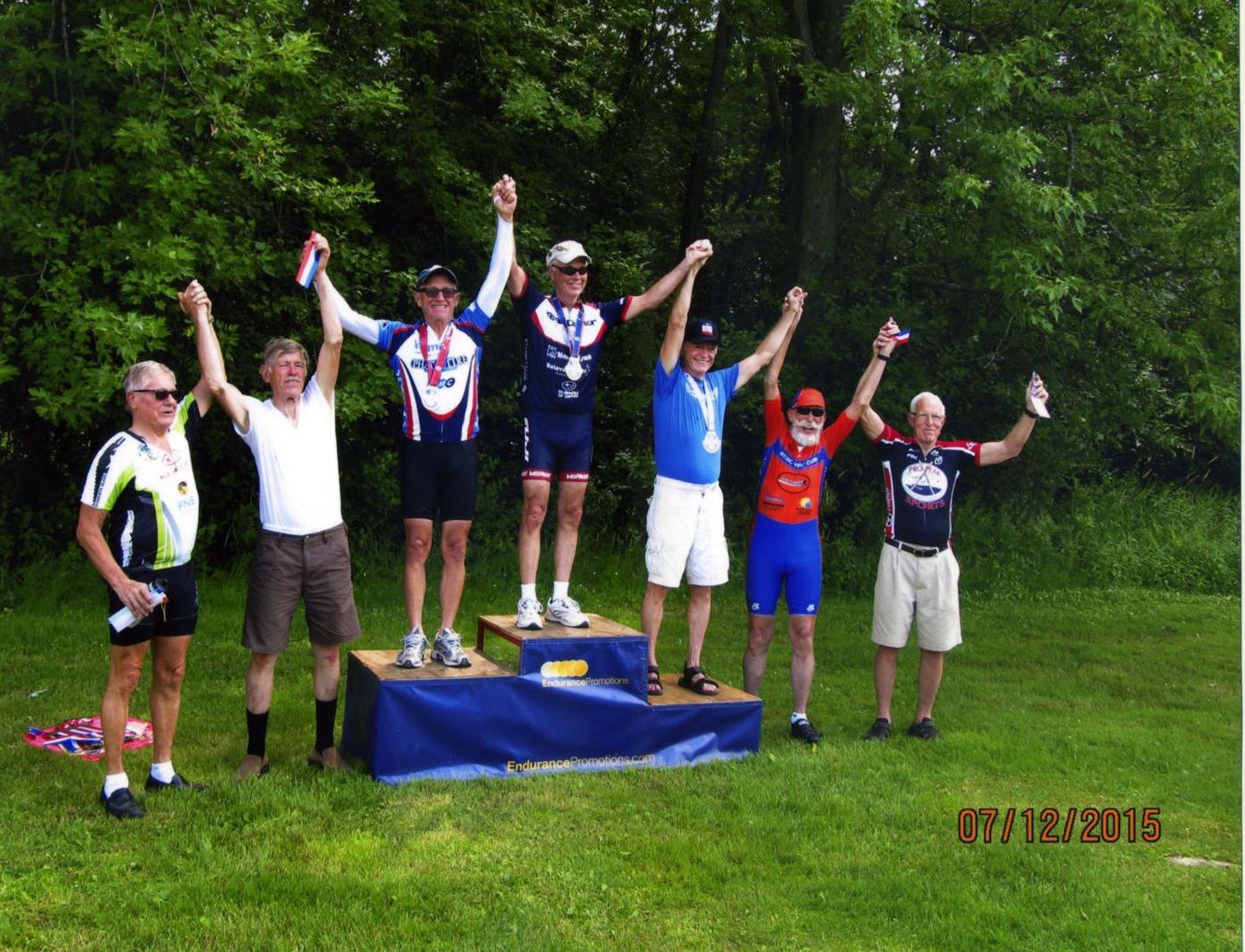 Gene Killingsworth (center) is celebrating on the podium after receiving his first ever gold medal at the Senior Olympics held in St. Paul, Minnesota last week. 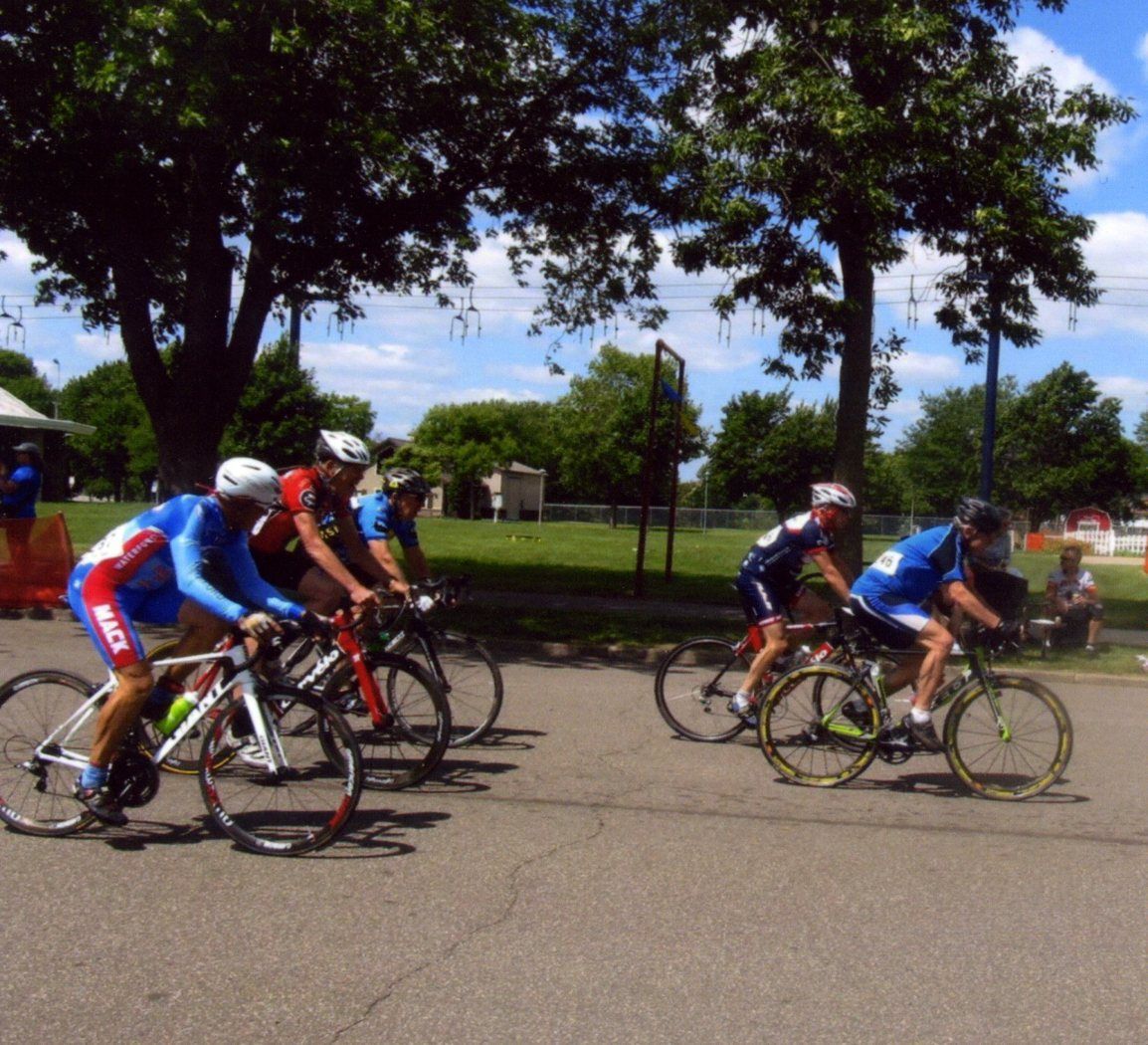 Gene Killingsworth (front left) is pictured in one of the four cycling events that he competed in at the Senior Olympic Games.

Gene Killingsworth of New Plymouth displays the multiple awards that he earned while competing in four cycling events at the Senior Olympics. He was presented a gold and bronze medal, as well as two ribbons for finishing in fourth place in two of the events.

Gene Killingsworth (center) is celebrating on the podium after receiving his first ever gold medal at the Senior Olympics held in St. Paul, Minnesota last week.

Gene Killingsworth (front left) is pictured in one of the four cycling events that he competed in at the Senior Olympic Games.

For Gene Killingsworth, local resident and bicycle enthusiast, at the young age of 75, achieved a major milestone in his life when he earned a gold medal at the Senior Olympic Games that were held in St. Paul, Minnesota, last week.

He has competed in five Senior Olympic Games events previously, but this is the first time that he has made it to the podium.

When asked if he was pleased with his performance at the national level, Killingsworth replied, “This is the first time that I have ever received a medal and never dreamt I would get a gold medal, so I was thrilled.

“I guess it hasn’t really sunk in yet, when you realize there are 350 million people in this country and of course not all of them cycle, but a lot of them are competitive at something.

“For anyone to win at a national level is an accomplishment or something that I had not fully understood or could relate to because it is like racing against your friends, you win one day and then the next day they are going to beat you and it is really hard to absorb it all and let it sink in,” he explained.

The gold medalist noted that it is amazing to realize that he missed two other medals by fractions of seconds.

“In the 20K road race, I missed third place by one-half of a second. It was my fault I made a tactical mistake when I didn’t shift into the right gear when I was sprinting. But when the awards were presented, the announcer said that he thought I was the most aggressive rider in the event, so I believe that I really earned that ribbon,” he said.

In the 10K time trial, Killingworth missed the bronze medal as well by two seconds.

“Again, I made another error and you cannot make any mistakes at that level because the competition is too competitive,” he added.

Killingworth’s wife Marion said that it is thrilling to watch her husband compete but at the same time she worries that an accident can occur in a split second.

“Gene was seriously injured in a cycling accident while training many years ago and he is lucky to be alive, so that tends to stick in the back of my mind,” Marion said. “So I was glad that once the competitions were over that everything went smoothly and he accomplished his goal of winning at the national level. We feel honored and blessed to have been part of the national games.

“I believe that it is a shame that the Senior Olympic Games don’t receive more publicity in the media because there were 11,000 athletes competing from across the nation, as well as many athletes from other countries, so it has grown into an international event.

“It is fun to watch all of the events. We were impressed with one man who was 100 years old and competed in the track and field events including discus, shot-put, javelin throw, 50, 100 and 200 meter sprints. He earned six gold medals for his efforts because he didn’t have anyone competing against him but they were well deserved because he was there and participated in his sport,” she said.

Killingsworth said that while cycling throughout the years, he has made lifelong friends.

“As competitors, we watch one another and I was touched when a group of competitors came up to me and said they have watched me for a long time and like the way I raced and liked my aggressiveness. They told me that I was an inspiration to them. That was a true compliment because you don’t even think about what other people are thinking about you as you are racing,” he said.

After taking a rest for the remainder of this week, Killingsworth will climb back on his bicycle again to compete in a state championship in Cuyahoga Falls next week.

“That event that is being held near Cleveland includes a road race and time trial that I will be riding in as well. The thing I have to watch out for now is that you have to be careful at the local level because guys enjoy beating someone who has won a national championship because they want to beat you and do not let up,” he admitted.