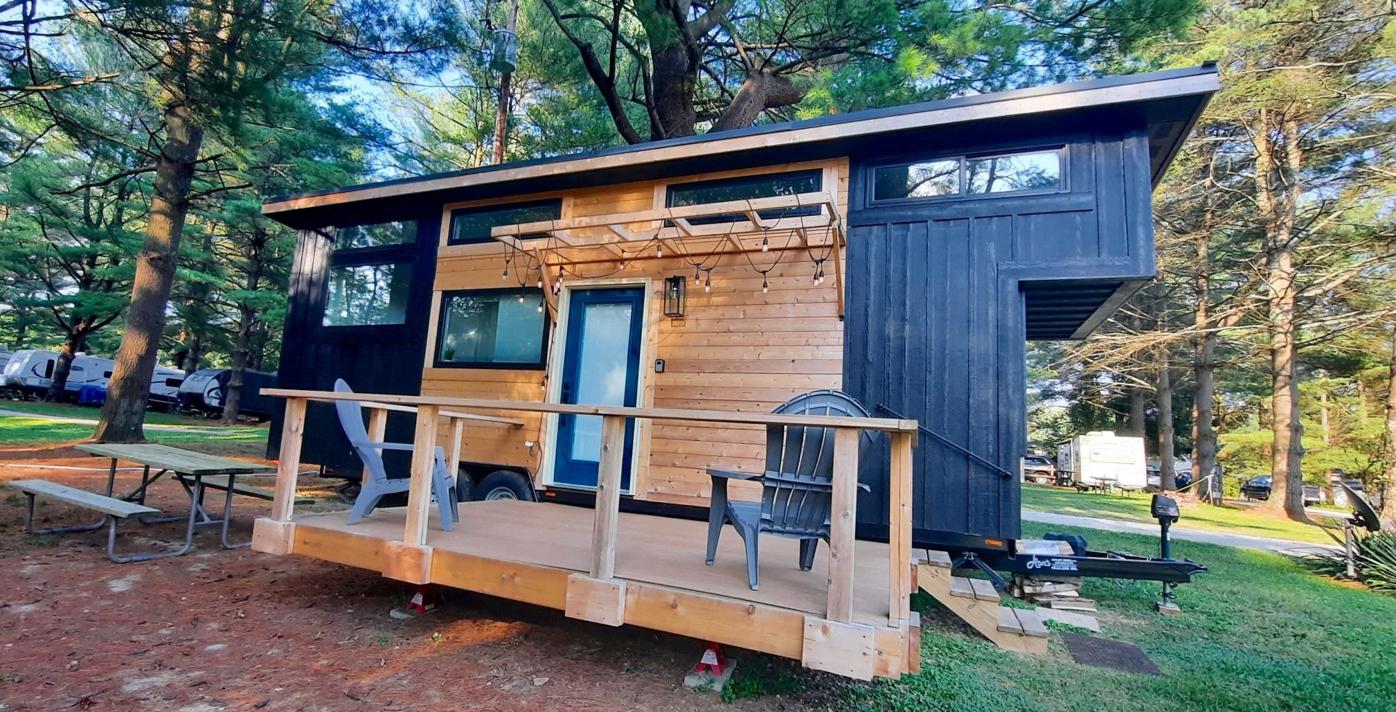 The Juniper is one of a number of tiny houses to be found throughout the Hocking Hills.

The interior of the Juniper tiny house features an economical use of space.

The Juniper is one of a number of tiny houses to be found throughout the Hocking Hills.

The interior of the Juniper tiny house features an economical use of space.

LOGAN — A trend that exploded in the mid-2010s continues to grow in the Hocking Hills.

According to thetinylife.com, a website run by tiny home advocate and author Ryan Mitchell, tiny houses are part of a greater “tiny house movement,” centered around minimalism and sustainability.

According to thetinylife.com, the typical American home is around 2,600 square feet, whereas the typical small or tiny house definition is a home with square footage is under 400 square feet.

According to Google Trends, interest in “tiny houses” has progressively gone down since a peak in 2015; however, it saw a spike last summer, between early May and August 2020.

The Hocking Hills region sees over 4 million tourists per year and has its own growing tiny house lodging options. Among them are Hocking Hills Tiny Houses, by Matt and Christine Shaw, which began operation in 2019.

The Shaws refer to their tiny houses as tiny houses on wheels, or THOWs. They have three THOWs: the Gladiola, the Trillium and the Juniper, two of which are placed at Campbell Cove Campground.

A stay in a THOW is cozy; the limited space is maximized for both efficiency and comfort, not a corner nor a crevice goes to waste. All is stylized in the most modern home designs, neutral color pallets, warm lighting and trendy decor. Stays in THOWs cost $119-199/day, according to the Hocking Hills Tiny Houses website.

Hocking Hills Tiny Houses were a dream come true for the Shaws. For over a decade, the couple hoped to pursue their own business, so that perhaps Matt wouldn’t have to work in Columbus “forever,” as they put in an email.

After spending nearly three decades working in Columbus and living in the Hocking Hills, they thought, “We need to get into the tourism business and work for ourselves.”

Christine had always been a fan of interior design herself, dabbling in it when she could. Their children too like to be involved in construction projects, Matt said. Then, in 2018, the family happened upon a tiny house TV show.

“Our oldest son Isaac said, ‘That looks like fun…we should do that!,’” Matt said. “Of course, building a tiny house on wheels (THOW) seemed out of the question to me and Christine. Why would we do that? How would we pay for that? But, we had sort of run out of construction projects so I didn’t totally put it off as preposterous.”

A few weeks later, Isaac found the family a trailer to renovate. They worked on it for about a year, though at first weren’t sure what the plan was. They had experience finishing basements, building decks, but never an entire home.

“We figured we could try to rent to tourists, even though we didn’t know at the time where we’d put it,” the Shaws recounted. “That’s the beauty of being on wheels! We could figure that out later, and it wouldn’t need to be permanent in any location!”

Their first house, the Gladiola, opened in 2019. It did well in terms of guests and finances. The Shaws then realized they were onto something and bought two more trailers: the Trillium, built in spring 2020 and the Juniper, built in fall 2020.

Each tiny house is different from the previous one. All of the Shaw’s five kids — Isaac, Clare, Max, Ben and Sophie — have helped build them, the parents said. Construction of one tiny home cost several thousand dollars, they said.

The typical Hocking Hills Tiny Houses customer is a small party looking for a weekend getaway, Matt and Christine said.

“The cohort is mostly couples, not groups of couples or parties, but small families, too,” Matt said.

According to Airbnb, there are other tiny houses located in the Hocking Hills, including the new Nova Cottage shipping container home, which costs $226 per night, as well as the Blue Bird Shipping Container House by Hillside Retreats, LLC, which costs $277 per night.

However, the Box Hop was one of the first shipping container homes in the Hocking Hills, Hocking Hills Tourism Association Executive Director Karen Raymore told The Logan Daily News.

The Box Hop, located in Rockbridge, opened in 2019 by Columbus couple Emily and Seth Britt. Like the Shaws, they worked on the homes themselves; Emily designed layout, floor plan, and décor, while Seth general-contracted the projects.

The Britts later built a second Box Hop, called the Boho, which sleeps up to four and is $285 per night, while the OG sleeps up to six and is $415 per night.

Like many other visitor rentals in the Hocking Hills, the Box Hops stayed busy throughout the pandemic, though adjusted to new cleaning procedures, as did Hocking Hills Tiny Houses.

The Logan Daily News previously reported that the Hocking Hills experienced a boom in tourism during the height of the COVID-19 pandemic; 2020 was a record-breaking year.

“The first two quarters (of 2020) show the impact of COVID,” Raymore explained. “I suspect based on the way things are going, that we’re going to see that kind of a huge increase (this year).”

“We saw people coming even though the parks were closed,” Raymore said.

Raymore does credit the pandemic and the circumstances it created for the Hocking Hills boom; from restricted air travel to restrictions overall, people flocked to Ohio’s “crown jewel.”

“I think that the fact that we are (within) a day’s drive of 60% of the US population — in a way, it was kind of a perfect storm,” Raymore said. “You had an event that was making people very apprehensive about traveling anywhere... The demand for outdoor activities, combined with detached rental vacation rentals, was higher than ever.”

Raymore said the HHTA is optimistic for the future and considers itself lucky that COVID did not impact it the way it did other tourist destinations, some of which crumbled. She expects the popularity of tiny homes in the Hocking Hills region to continue to grow with its industry, as a tiny house stay can be considered “glamping.”

“Glamping” is a portmanteau of “glamorous” and “camping.” According to Google Trends, interest in glamping has increased steadily since 2004, peaking in July of last year. Raymore said it’s become a hugely popular option for Hocking Hills visitors within the last couple of years.

Glamping is camping without sleeping on the ground, but also without luxury accommodations, Raymore said. Other examples of glamping that can be found in the Hocking Hills include tipis, yurts, geodomes and covered wagons.

Most Hocking Hills visitors are leisure travelers, Raymore said, meaning they aren’t visiting on business. Many come to participate in physical activities and outdoor recreation, such as hiking, rock-climbing, fishing and more.

Stays in tiny houses accommodate the basic needs of such leisure travelers: a roof, a bed, bathroom and small kitchen. Also in line with changes ushered in by the pandemic, Raymore has noticed many visitors extending their stays from weekends to weekdays.

As for the future of tiny homes, the Britts are working on their third and largest rental, the Hygge, a Scandinavian-style five-bedroom. The next addition to the Hocking Hills Tiny Houses will be a single-floor rental which will be more accessible, as the other tiny homes have lofted bedroom spaces which have access by ladder.