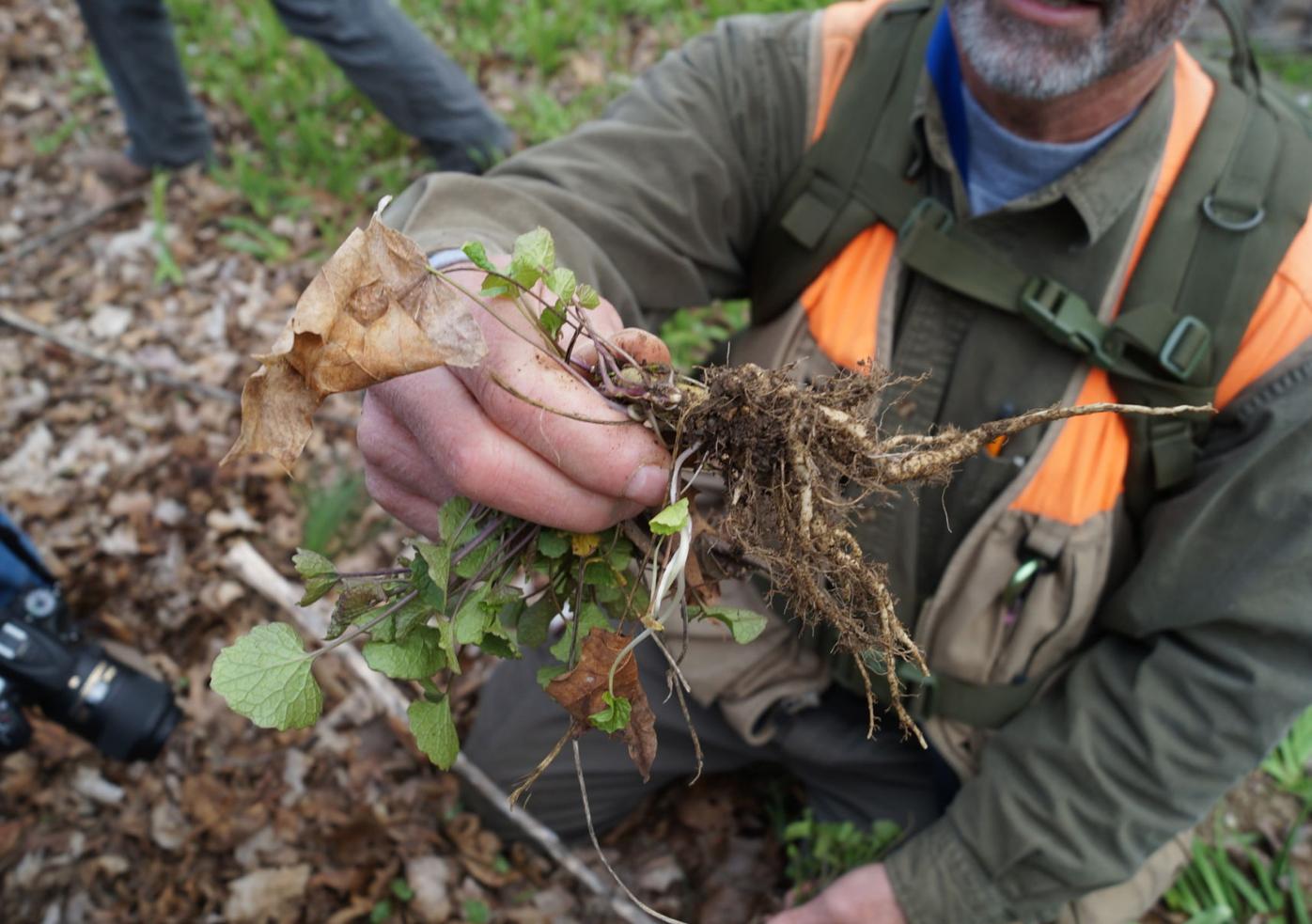 Garlic mustard rosettes, which can be identified by their garlic and onion smell and kidney shaped leaves, must be pulled out completely by the roots or the complex root system will allow the plant to continue to grow. 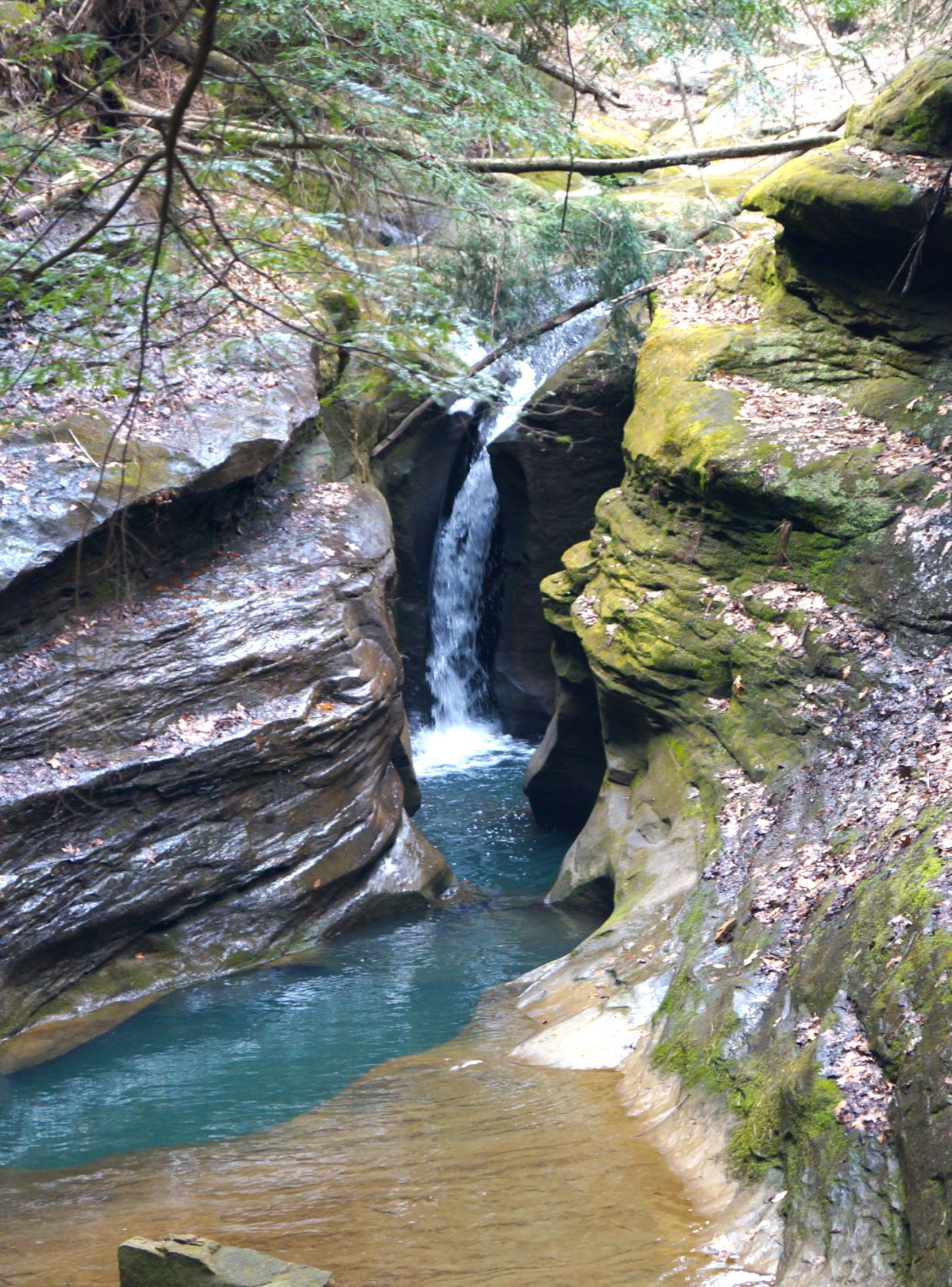 Garlic mustard rosettes, which can be identified by their garlic and onion smell and kidney shaped leaves, must be pulled out completely by the roots or the complex root system will allow the plant to continue to grow.

LOGAN — On Wednesday, the Ohio Natural Areas and Preserves Association (ONAPA) collaborated with Ohio State Nature Preserves to try to address a common invasive species that is posing a threat to the native plants and animals in our wooded areas — garlic mustard.

ONAPA coordinated a stewardship project at Boch Hollow State Nature Preserve to gather volunteers who would be able to help the staff of the nature preserves address some of the pressing issues that the area is facing.

Despite the event being held during the week, approximately 23 volunteers stepped up to help search for and pull garlic mustard plants.

According to Jennifer, Windus ONAPA Stewardship Project Coordinator & Vice-president, this is the second year that ONAPA has partnered with Ohio State Nature Preserves to help maintain the integrity of the area. Last year, there were 11 events, and they were such a success that 20 events have been planned for this year.

Windus shared that everyone was pleasantly surprised by the turnout considering that it was only the second event of the year, and the first to be held during the week.

According to Windus, garlic mustard is a real threat to native species in the area, and early spring is one of the best times to remove the plants.

“This plant comes up early in the year, so even though a lot of the other wildflowers are not up yet, garlic mustard should be easy to see and it should be easy for us to pull the rosettes out and get them out of here,” explained Windus.

Garlic mustard is a biennial plant, meaning that it takes two years to flower. The first year it grows as a rosette, a small plant with kidney-shaped leaves that hugs the ground and stays green though the winter. The plant has a very hearty root system, and if the plant is pulled and left on the ground, it will send its roots back into the earth and right itself over time. In the second year, the plant bolts, meaning it grows a flower stem that is two- to four-feet tall that flowers and produces hundreds of seeds, spreading and choking out the native plants.

“In some of the woods where garlic mustard dominates, we lose all the native wildflowers,” said Windus.

Garlic mustard was imported into North America by Asian cultures for herbal and medicinal purposes. It began growing in the wild, and was soon growing rampant throughout wooded areas.

“It puts a toxin into the ground that will destroy the fungal relationship with the plants,” explained Levi Miller, preserve manager at Boch Hollow State Nature Preserve.

“It kills the fungus, and most of our native plants rely on fungal relationships to get their nutrients out of the soil. Garlic mustard does not, and it will kill that fungus, which makes it difficult for our native plants to germinate and grow and thrive.”

Miller shared that the plant also has a toxin in its leaves, and will produce more toxin the more it is nibbled on by unwary insects like the West Virginia White butterfly, which feeds on native mustards. When the butterfly lays its eggs on the garlic mustard by mistake, the caterpillars hatch and die when they try to eat, meaning fewer caterpillars to either feed the native birds or to become butterflies.

Miller suggested that anyone who is interested in clearing garlic mustard from their own properties begin by learning to identify the plant and then scouting the area, focusing on rich areas with heavy topsoil.

He also suggested that the process begin as soon as the snow is melted and the ground slightly thawed so that the plants are smaller and there is less soil disturbance when it is uprooted.

The plants must be removed, or they will continue to grow. On older plants that have already flowered, if you cut the stem off at the base and the roots will not re-flower.

“Once you pull it, you’re not done,” said Miller. “The real key is to keep after it year after year.”

Miller shared that the plants that are pulled on the preserve are placed in trash bags, sealed, and solarized, or left out in the heat of the sun to ensure that the plants are completely dead. The bags can then be dumped out and reused during the next year’s effort to pull the garlic mustard.

Miller stated that he is extremely grateful to the volunteers and to ONAPA for partnering with the preserve to help address this issue.

“It’s wonderful,” said Miller. “We [Ohio State Preserves] do have a limited staff, but we still have the same amount of acreage, and actually more acreage than when we had a larger staff. Unfortunately, the area is what is going to suffer as invasive species continue to increase and push out our native wildflowers and native plants.”

Miller stated that he and the staff at the preserves are always looking for volunteer groups, and that ONAPA has stepped in and helped a great deal in that regard.

For more information, or to volunteer for future events, contact ONAPA at www.onapa.org, or the Ohio Department of Natural Resources Division of Natural Areas and Preserves at www.naturepreserves.ohiodnr.gov.

Both agencies also often post information on volunteer projects on Facebook for those who prefer social media outlets.