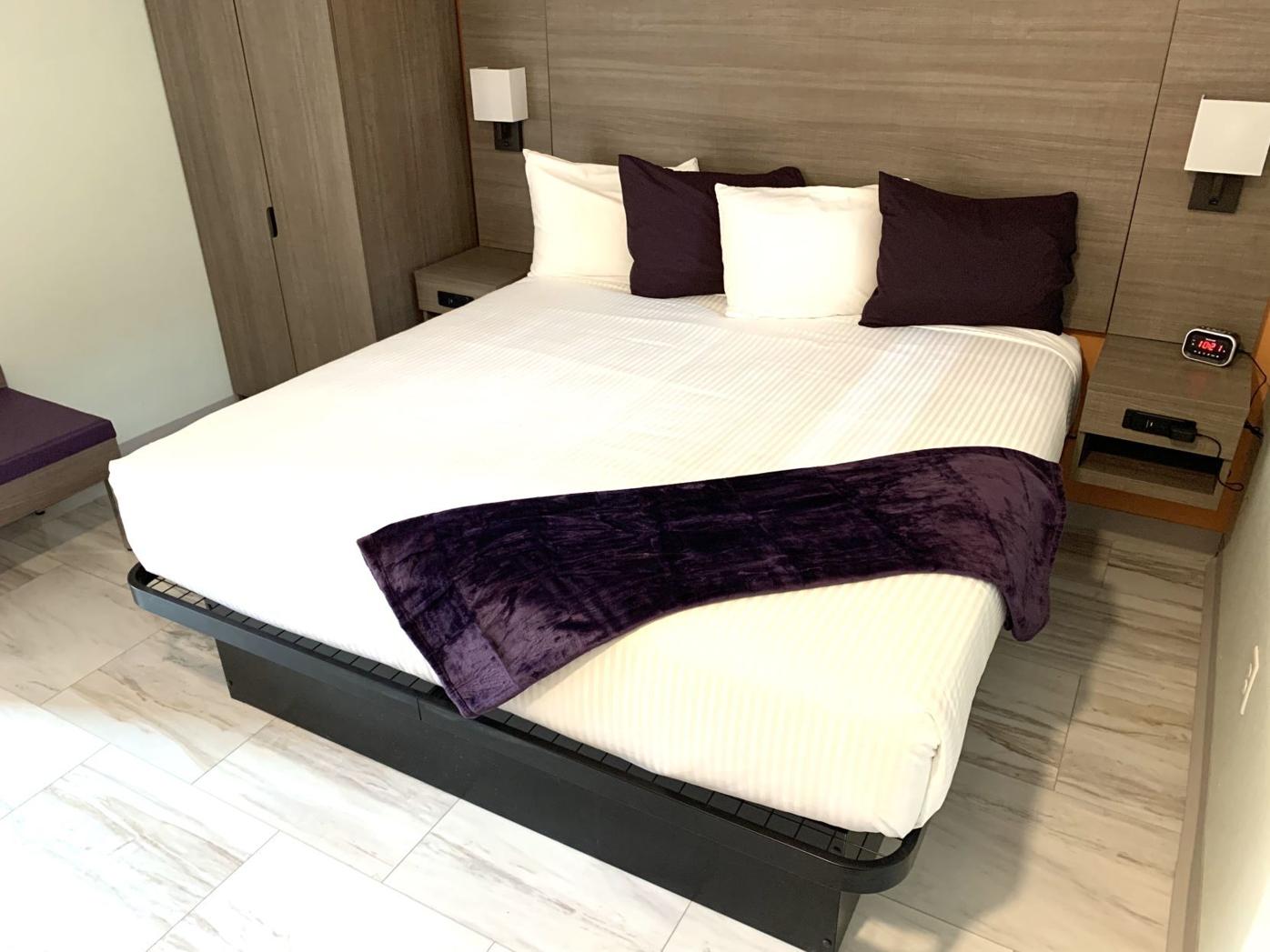 All rooms inside the hotel have either a queen or king sized bed. 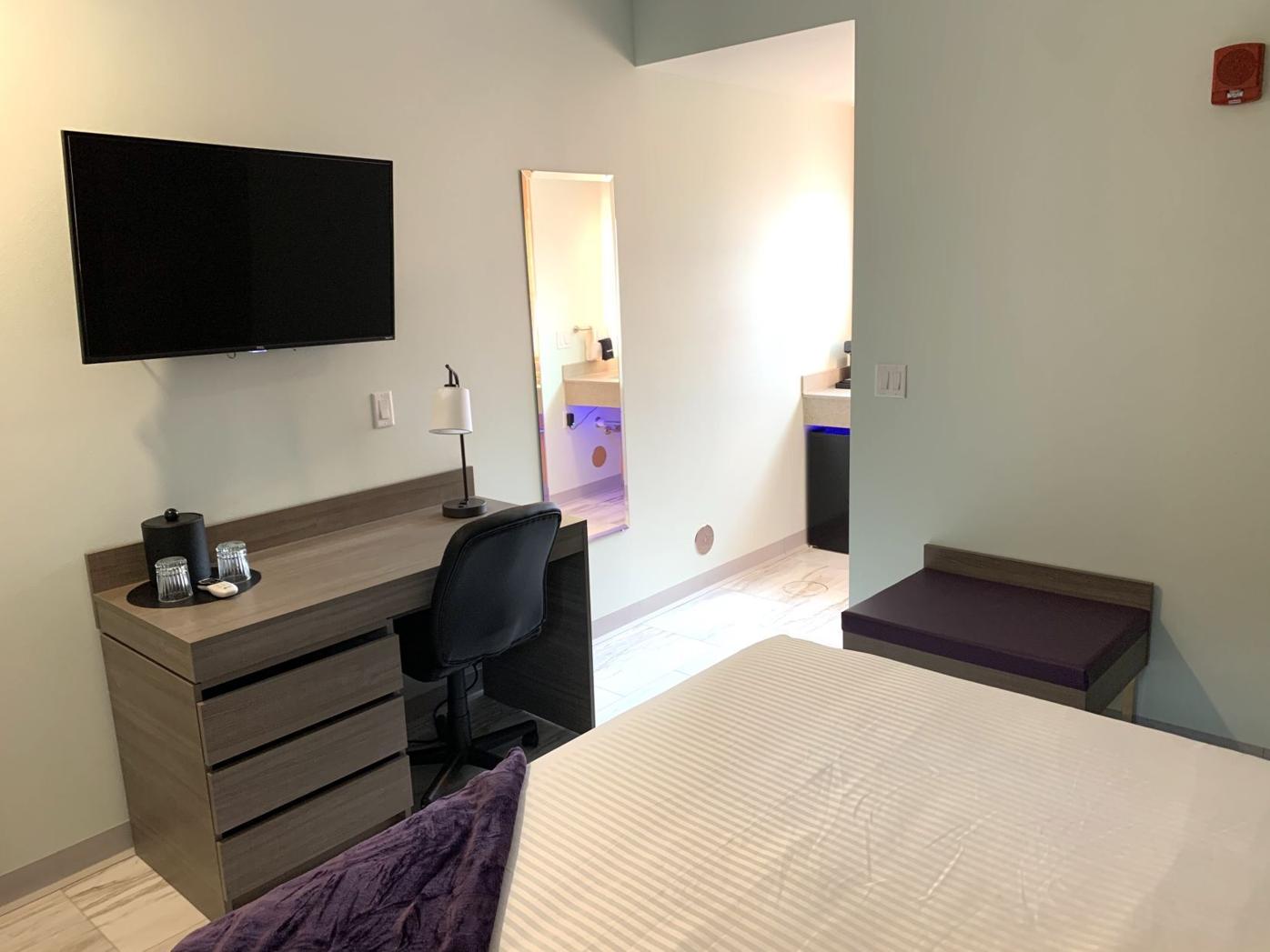 Rooms at the hotel are powered by a keycard switch that turns all expect service lights off in the room if a card is not placed inside the wall mechanism.

All rooms inside the hotel have either a queen or king sized bed.

Rooms at the hotel are powered by a keycard switch that turns all expect service lights off in the room if a card is not placed inside the wall mechanism.

LOGAN — With just a few inspections and polishings left to do, the Worthington of Logan Hotel is set to open officially on Jan. 29. After what has been an extensive process, the vibrant atmosphere is just about ready for people to relax in.

For several months, locals have been patiently waiting to take a glimpse into what is behind the walls of 72 W. Second Street in Logan. In July of 2019, members of Logan Anew, LLC and the Hocking Hills Chamber of Commerce broke ground for The Worthington of Logan Hotel.

At the corner of South Spring Street and West Second Street, for the past several months construction workers have been putting the inside of the building together. As previously reported by The Logan Daily News, Larry Gerstner, one of the primary managers, stated back in September that the ownership wanted to keep the interior a surprise.

While some aspects of the facility still need to be completed, most of the hotel is just about ready for public visits. However, according to Larry Gerstner, there are a few more hoops to jump through before people can officially stay there.

“We are hoping (to be open) by Jan. 29,” Larry told The Logan Daily News. “We still have state inspections (to be done).”

Larry added that state inspections are hard to prepare for as they can determine whether or not the hotel can operate. What’s left on the inspection list is plumbing, electrical, structural and a visit from the state fire marshal.

After all the state inspections are done, the hotel will still need final approval for its food services from the Hocking County Health Department. All other needed inspections must be signed off on prior to the health department inspection.

Further, given the public health climate, Larry recognized that the hotel will need to operate a bit differently to align with social distancing standards. For example, the hotel’s continental breakfast will be limited to avoid close gatherings.

“We know that we have to keep separation,” Larry said.

There are a total of 36 rooms, all with similar bathroom amenities, inside the hotel’s walls. Five of the rooms have two beds with some rooms having the feature of a connecting door into a separate room – suitable for families, according to Joyce and Larry. Most of the rooms hold either king- or queen-sized beds.

Stepping into the main room of the hotel, covered with a see-through glass ceiling, visitors will see a vibrant décor with a pool to accompany it. Larry stated that the ownership wanted there to be a southern Florida-esque feeling when people initially walk into the building.

“We had to put the pool in first,” Larry said. “We had to put it in before we built the hotel because it’s bigger than the doors.”

The pool is just one of several features that requires final approval before usage. Most of it was installed 15 months ago, but state inspections and other aspects of the pool still need to be worked on.

Today, approximately 14 investors will be taking their first looks into what will soon be a finished product. The group, according to Larry, saw that around five million or so tourists make their way through Hocking County and wanted the city of Logan to have some room in the county’s vacation spotlight.

“The goal of doing this was to bring the five million tourists into Logan,” Larry commented. “Of course, we can’t fit five million, but if we bring in 80 people a night that is a really big change to downtown Logan.”

Typically, the nightlife of the downtown streets is not much apparent, even in a world without COVID-19. Logan offers a quaint, hometown and home-grown atmosphere, suitable for the regular tourist.

“We are hoping to get some nightlife in Logan,” Larry communicated.

Both Freeman and Joyce commented on how the new hotel will have a local-centric approach when it comes to partnering with other local businesses. Larry also stated that even local residents can come in for a little escape of their own if they so desire once rooms become available.