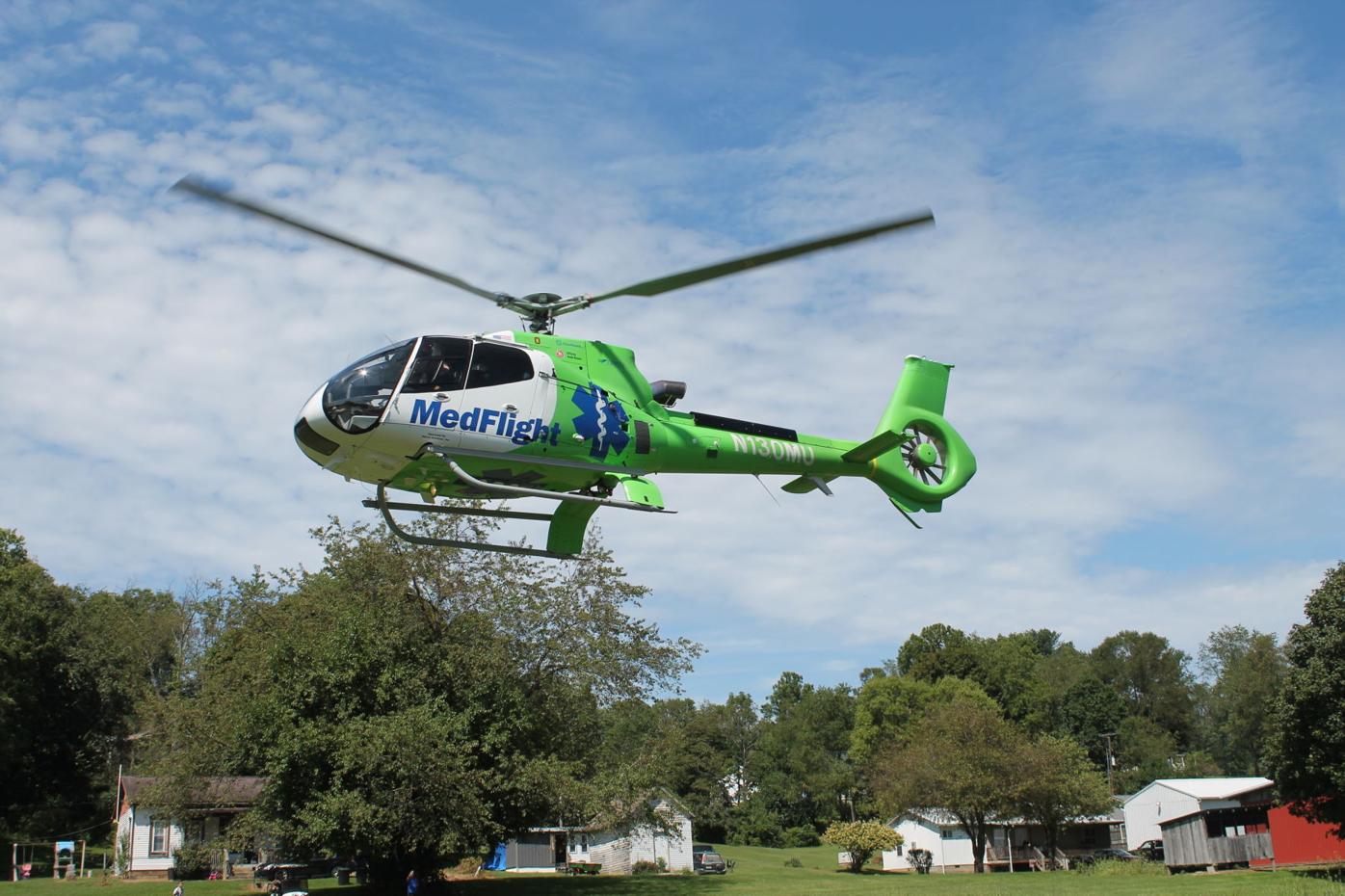 MedFlight takes off from its new landing site in Moxahala. 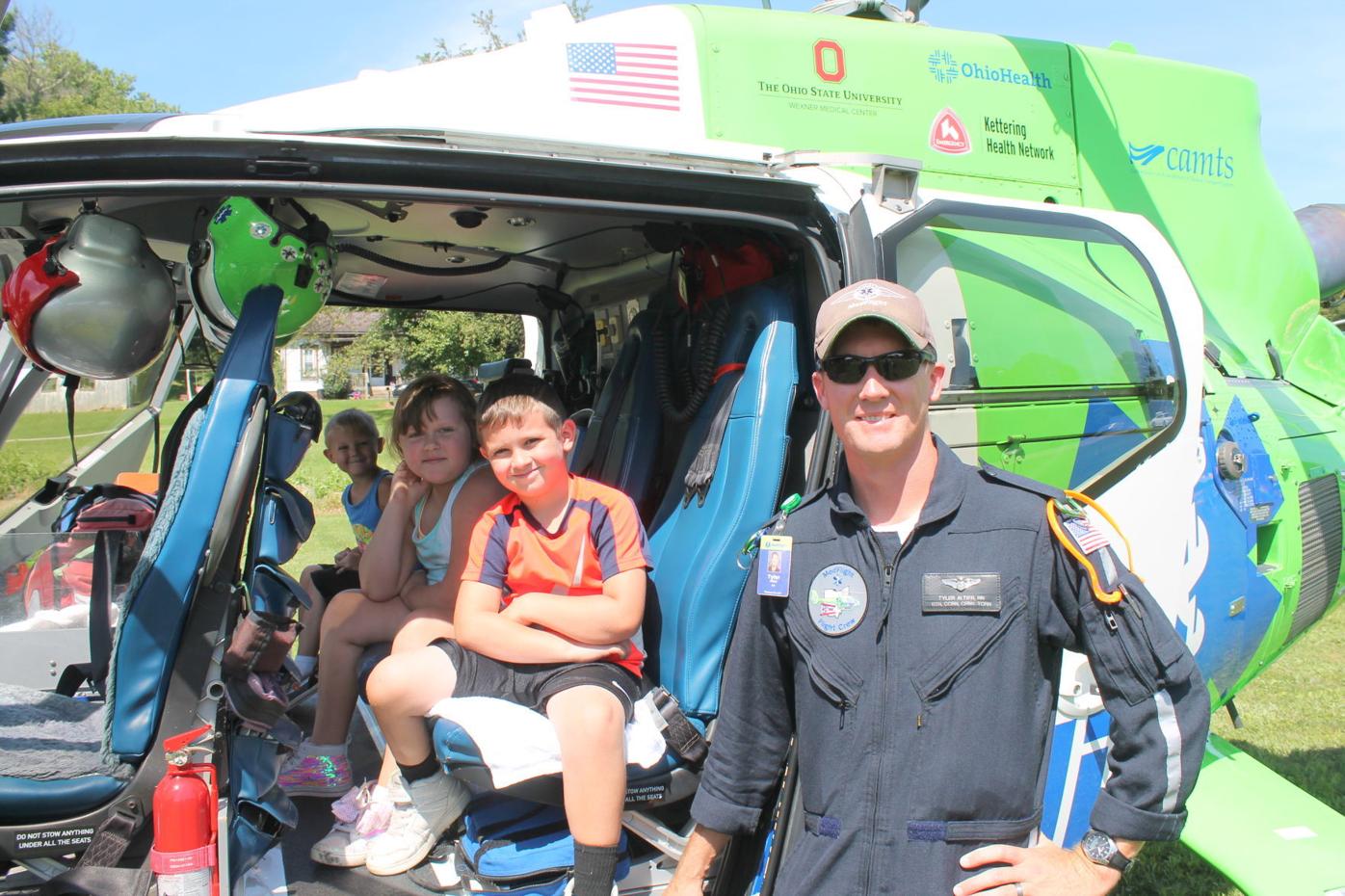 Sitting in the MedFlight helicopter, from left, are Wyatt Hoops, Nevaeh Smith , and T.J. Canter, with MedFlight crew member, Tyler Altier, RN, along for the ride.

MedFlight takes off from its new landing site in Moxahala.

Sitting in the MedFlight helicopter, from left, are Wyatt Hoops, Nevaeh Smith , and T.J. Canter, with MedFlight crew member, Tyler Altier, RN, along for the ride.

MOXAHALA – As reported in the Perry County Tribune recently, the dedication of the Moxie Landing Site for Medflight helicopters took place on Saturday, Sept. 4. The MedFlight chopper circled the new landing zone from a high altitude before descending at 1 p.m.

“Now’s your chance to ask these guys any questions you have and take a look at the gear they pack in their helicopter,” invited longtime Perry County resident Larry Hatem as he opened the dedication ceremony. Pleasant Township Trustee Jeff Berry addressed the crowd following Hatem’s brief presentation.

“We believe this is a great landing site for MedFlight because of the access to Route 13 and two township roads,” said Berry. “When seconds count, accident, heart attack, and stroke victims in southern Perry County now have a better chance at survival.”

MedFlight pilot Josh Liff, affirmed Berry’s statement by detailing the flight time between Moxahala and Grant Hospital in Columbus. “From here, we can be at Grant in 17 to 18 minutes,” Liff said.

In addition to the pilot, the typical Medflight crew has a medic and a nurse aboard. Tyler Altier, RN and medic, Scot Compton, rounded out the three-man MedFlight crew. All three men are military trained. Liff is U.S. Army, Ret., while Altier is in the Air Force Reserve and Compton is in the Army National Guard.

“I talked with Dave Ankrom at MedFlight and he told me the MedFlight chopper is in the air six minutes after a call comes to them,” stated Berry. “In winter, it may take them 10 minutes because they have to pull the chopper from the hangar.” The MedFlight chopper that landed in Moxahala that Saturday primarily serves five counties that surround the Morgan County site.

According to Liff, MedFlight has one hour and 45 minutes of flying time before it needs to be refueled. He added that Columbus is their destination 90 per cent of the time once they have a victim loaded aboard MedFlight, but they have landed at hospitals in Pittsburgh, Cincinnati, and Cleveland.

“When we land at a hospital in one of those other cities, it’s usually when we are transferring a patient between hospitals,” stated Liff. With an average speed of 130-140 miles per hour, MedFlight is capable of covering those distances very quickly. Liff explained that flight crews work an eight-hour shift so MedFlight is available 24 hours a day.