Senior Justin Wolfe puts up two of his 11 points in Tuesday night’s game against the Warren Warriors.

Chieftain forward Nolan Robinette dunks the ball after coming up with a steal on the other end. 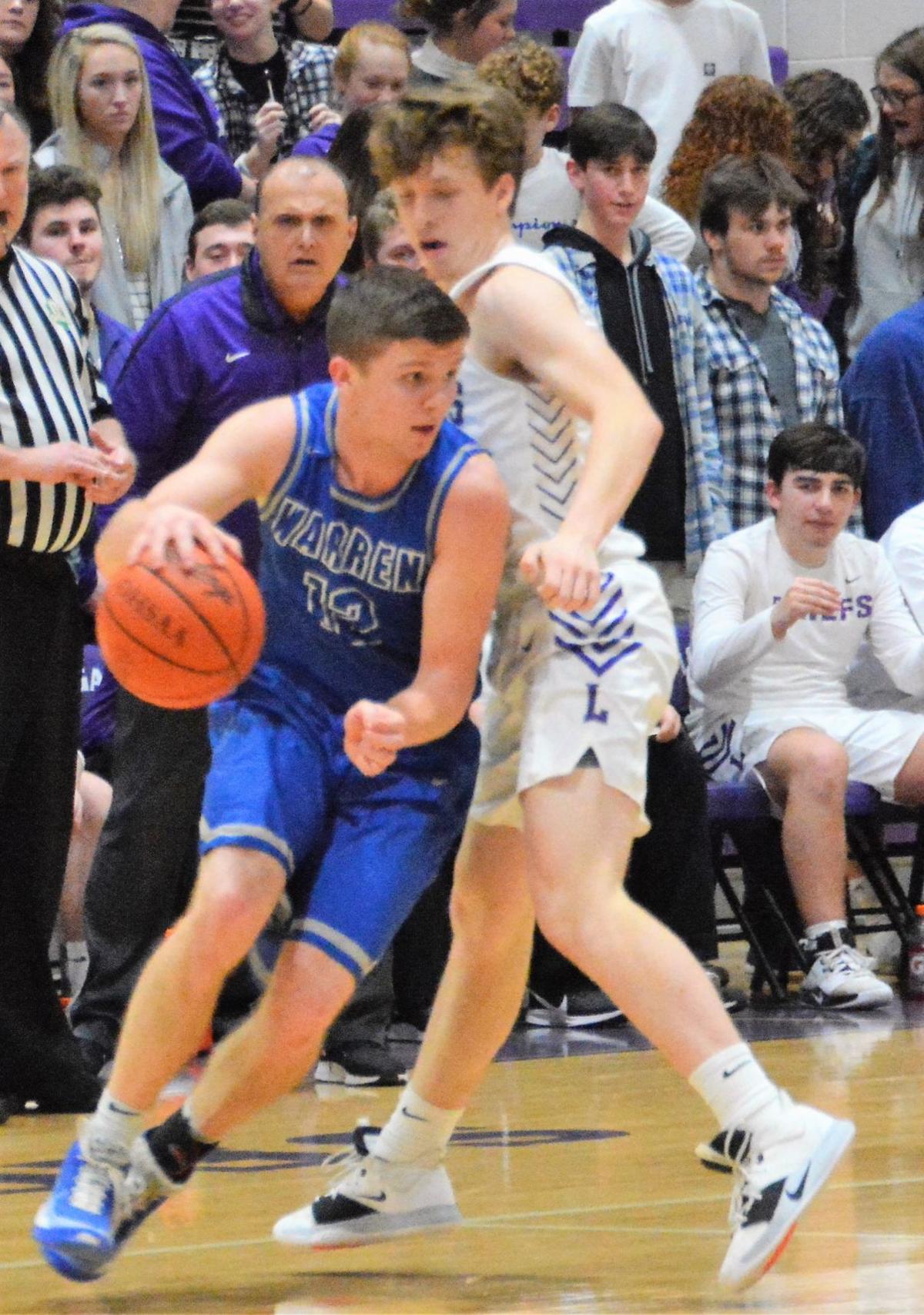 Tegan Myers tries to cut off Warrior Jake Baumgard as he makes his way to the basket. 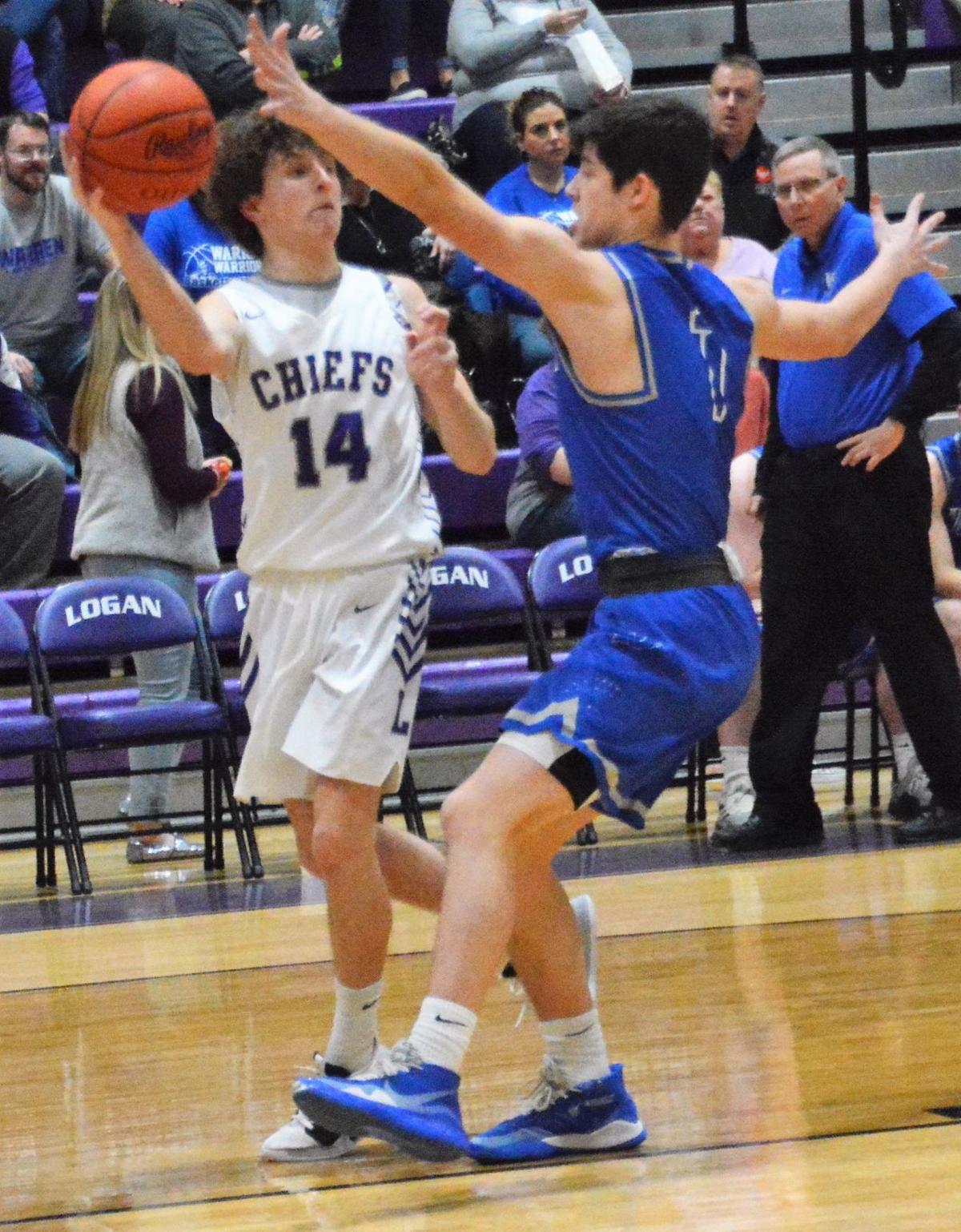 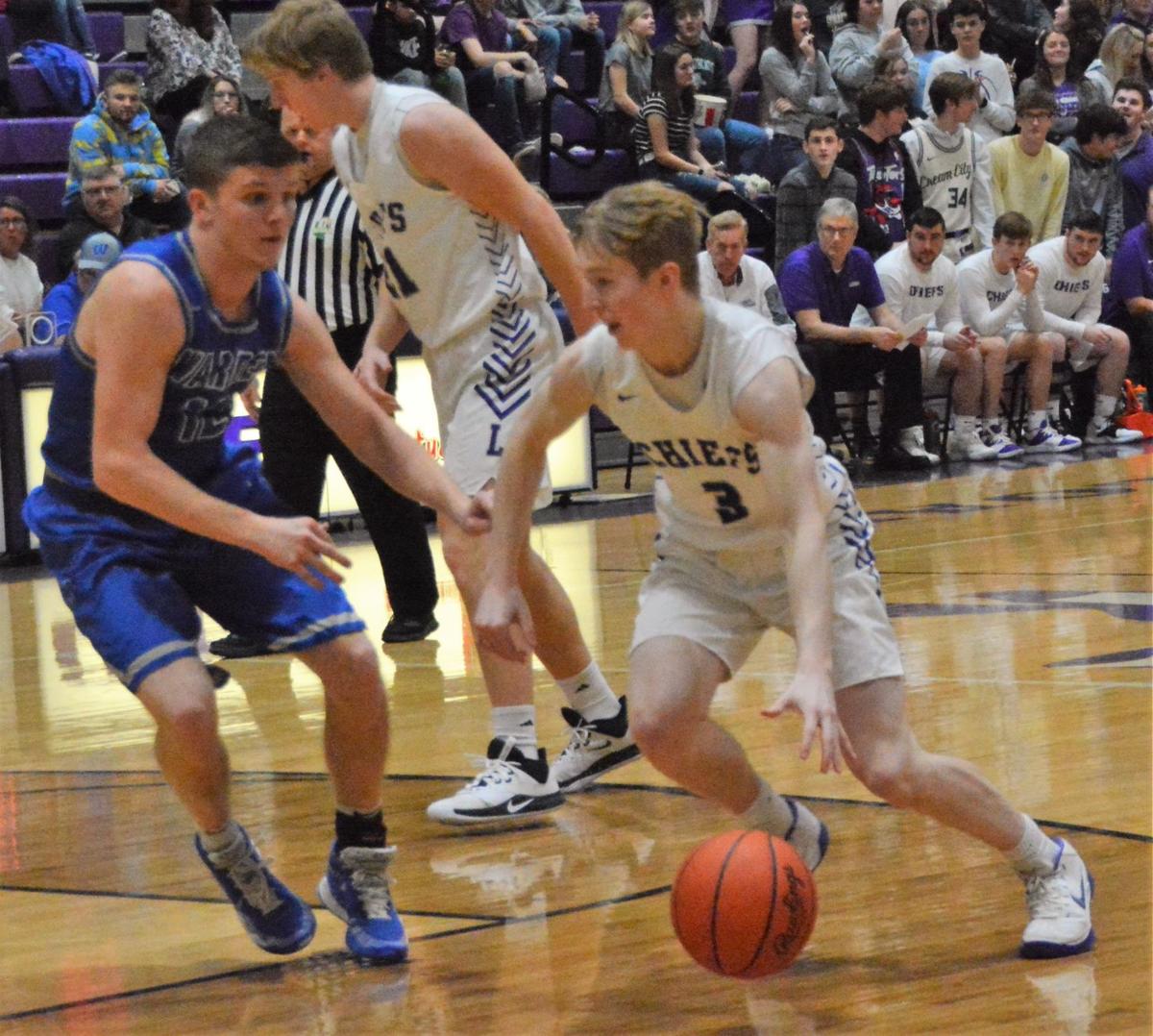 Mason Frasure drives hard to the rim as he tries to get past Brandon Simonette.

Senior Justin Wolfe puts up two of his 11 points in Tuesday night’s game against the Warren Warriors.

Chieftain forward Nolan Robinette dunks the ball after coming up with a steal on the other end.

Tegan Myers tries to cut off Warrior Jake Baumgard as he makes his way to the basket.

Mason Frasure drives hard to the rim as he tries to get past Brandon Simonette.

LOGAN — After several lead changes and a couple buzzer beaters, the Warren Warriors came out victorious against the Chieftains’ varsity basketball squad, winning 56-51.

The Chieftains lost the jump ball and Warren’s Joel Chevalier got his team on the board first after pump faking Justin Wolfe and putting it in. That was followed by a three pointer from Brandon Simonette.

Tegan Myers got Logan on the score board with a jumper from the free-throw line that bounced off the backboard and in.

Colten Castle got a basket in the first, putting in a layup over two taller defenders. Those were his only two points for the night.

Myers then hit free throws to put the score at 7-8. Robinette made a steal and dunked it on the other end giving them the lead by one.

With the clock nearly at all zeros, Logan’s Mason Frasure put up a three pointer at the buzzer and bank it off the glass to end the first ahead 12-9.

To start the second, Wolfe made a turnaround jump shot and got fouled. He completed the three-point play at the line.

Evan Byrd returned the favor with a baseline jump shot of his own and with 6:05, Warriors tied the game, but Wolfe hit a basket to put the Chiefs back up. This quarter was where all of the lead changes happened.

A behind-the-back dribble and pass leading to three put Warren up once more. Wolfe split foul shots to tie the game back up.

Again, this was short-lived as the Warriors connected on a three. Warren’s Isaac Colgrove added to that with a two under the basket.

Mason Frasure eventually tied it up at 23-23 with a three pointer and 3:08 on the clock.

A soft jump shot by Jake Baumgard quickly put Warren back ahead. Myers connected on a three, then Simonette made his own three.

Chieftains’ Conner Ruff wanted his own three pointer, so he knocked one down as well.

This quarter ended in another buzzer-beater, but for Warren, which put them up with a 30-29 score.

Then, a bullet pass from Kurt Taylor to Welch allowed him to score once more.

The Warriors kept scoring with Simonette knocking down a three to put the score at 37-29.

For Logan in the third, Mason Frasure made two free throws, Castle snatched two rebounds and Ian Frasure stole and layup to shorten the lead to three.

Floater from just inside the free throw line by Ian Frasure and the Chiefs were down by one to end the third.

Early in the fourth, Bumgard made a basket and got fouled with just under seven minutes to play in the game, connecting on his free throw.

Wolfe came back with his own basket and Robinette stole the ball on the other end and knocked down a three to put them back within one.

Lumngard had four in the quarter and then added more to their lead, 46-42. With about three minutes in the final quarter of play, Taylor hit a layup making the score 50-42.

Myers answered with a play putting the Chiefs down by five.

Then, a beautifully executed play where Castle lobbed up an inbound pass to Robinette, who gave the ball a soft touch into the basket, excited the crowd, but they were still down 53-49.

Justin Wolfe cut that down with a shot under the basket with 35 seconds left.

Then two free throws by Baumgard late in the fourth closed the game 56-51.