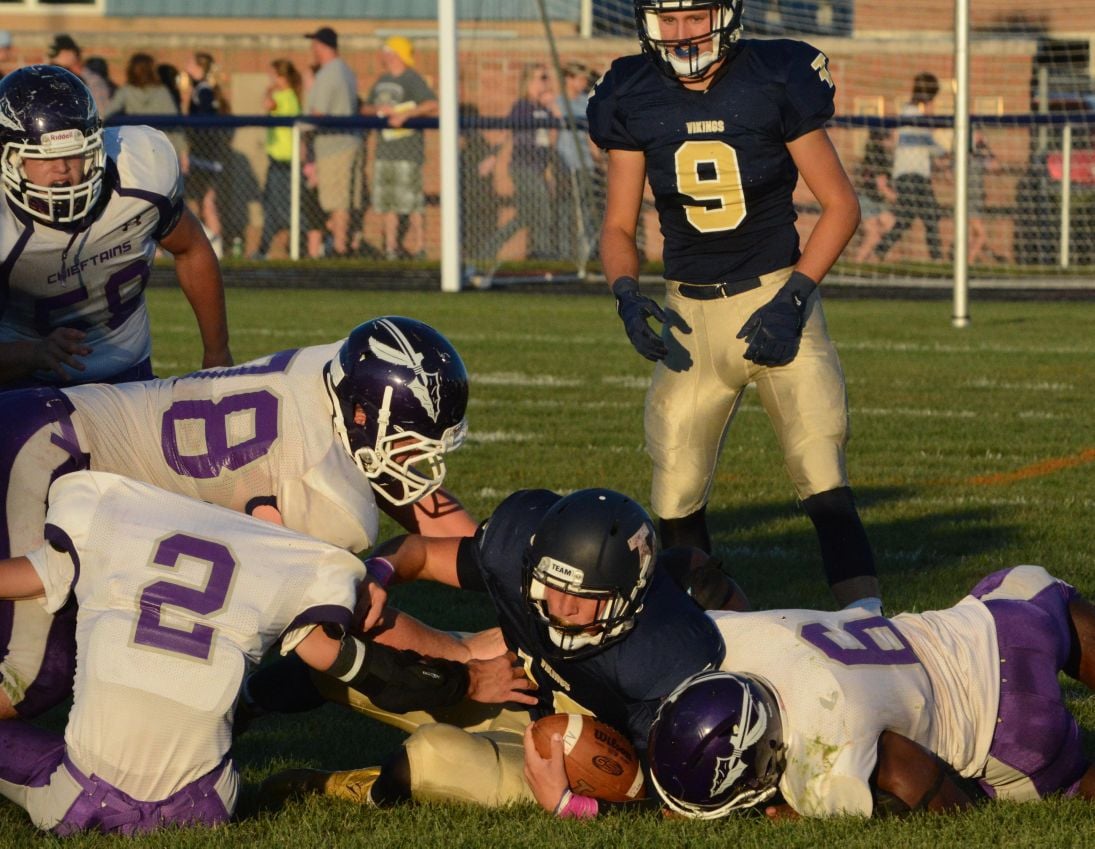 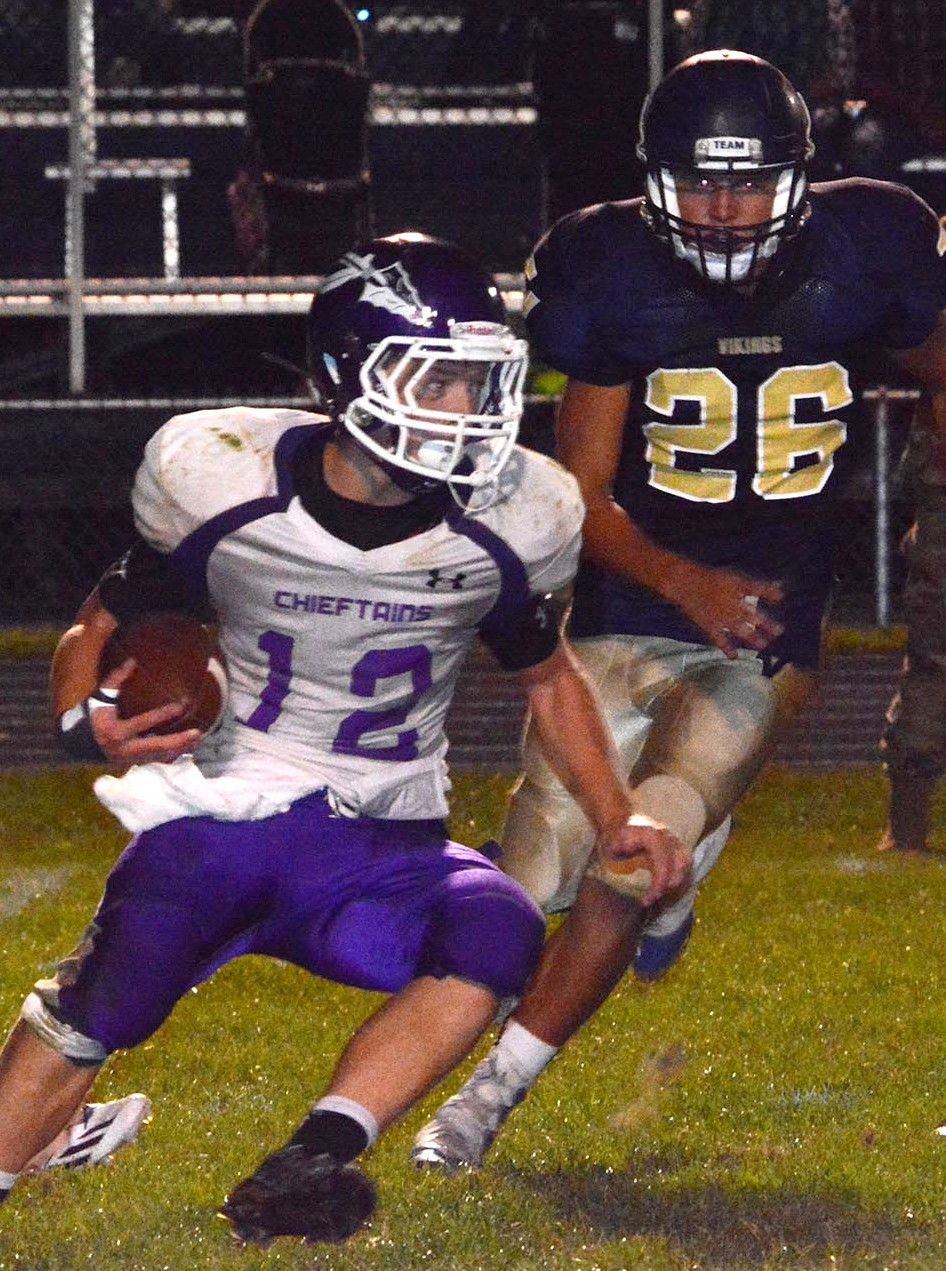 Logan’s Tyler Cummin (12) is pursued by Teays Valley’s Zeke Fortner (26) during the Vikings’ 21-0 win over the visiting Chieftains Friday night.

Logan’s Tyler Cummin (12) is pursued by Teays Valley’s Zeke Fortner (26) during the Vikings’ 21-0 win over the visiting Chieftains Friday night.

ASHVILLE — Once Logan’s only real offensive threat of Friday night’s football game came up empty late in the opening quarter, the Teays Valley defense took over.

The Vikings scored three second-half touchdowns to pull away from a game that was scoreless at halftime and blanked the visiting Chieftains 21-0 for their second victory in as many starts.

“I think we may have held them to negative yards rushing in the second half,” said Teays Valley coach Mark Weber.

Led by defensive lineman Zeke Fortner, the Viking defense held the Chiefs to minus-20 yards on the ground in the second half.

All the Purple & White managed on offense in the third and fourth quarters was three nice Brady Walsh-to-Jenson Wallace pass plays that accounted for 67 yards but got them no closer to the goal line than the TV 27.

“I have to give it to my defense in the first half (with) that stand down at the end zone,” Weber said. “When you get a goal-line stand, that pretty much tells you it doesn’t matter what they do, we’re not giving up a score.

“They can be inside the 10 and you stop them, the mind-set is you have the game (now) let’s get some offensive scores,” he added. “We said at halftime if this game has to be 7-0, we’ll take it. 7-0 will win the game because we knew our defense was doing pretty well. That mind-set kind of reassured our guy to just go out and have fun and play, and get off the ball, and it all took care of itself.”

Each team had one good scoring opportunity in the first half.

The Chiefs drove the ball from their own 38 to the Teays Valley 6-yard line in the first quarter — possessing the ball nearly eight minutes in so doing — and were helped along by three Viking penalties that resulted in first downs.

One of them was a fake punt on fourth down. The Vikings were whistled for pass interference when Logan punter T.J. Meyer threw a nice pass over the middle on a fourth-and-nine fake.

A 14-yard run by Walsh and a late-hit penalty on the Vikings got the Chiefs to the TV 8, and Jeremy Minor short run moved the ball to the 6, before a delay of game penalty hurt the Chiefs and Kline eventually missed his FG try.

Teays Valley then drove from its own 20 to the Logan 20, and a couple plays later left-footed Brett Carson came in to attempt a 39-yard field goal with around five minutes left in the half.

Before he could attempt it, however, Logan jumped offside and the Vikings decided to go for the first down on fourth-and-one. The middle of the Logan defense stuffed the Vikings for no gain on a running play and the Chiefs took over.

Minor did come close to putting the Chiefs ahead. He broke a 25-yard run with under four minutes remaining in the second period and had some daylight but Teays Valley’s Caleb Burgett made a TD-saving tackle. The Chiefs would eventually be forced to punt the ball away.

“Generally, a football game comes down to about six plays — a turnover here, or a momentum swing here or there, a missed tackle or something along those lines,” said Logan coach Billy Burke. “Tonight’s a good example of if we make this play, or don’t allow that play, then we can probably say this (game) would have a different outcome.”

“We really didn’t make (halftime) adjustments,” Weber noted. “We said the first half, you’re catching them on the offensive line. They were into us. We were running some sweeps in the first half, (then) in the second half we came out and said we were going to run the ball right at them.

“It was kind of a mind-set of ‘we’re coming right at you (and) we’re going to get off the ball faster than you do,’ “ he added.

Nathan Cornett’s 32-yard return of the second-half kickoff helped the Vikings start their opening possession on the Logan 47-yard line. On second down, Johnny Walkowicz went 32 yards on a counter play down to the Logan 12, and moments later Cornett broke the scoreless tie with a 12-yard scoring burst up the middle with 10:31 left in the third period.

“They were putting (Kory) Henthorne to the right, to the left to the middle, and when they moved him around we were doing the opposite,” he added. “I don’t if I should use the word ‘guessing ’ they were trying to strategize against us and we were getting the best of that and finding the holes.

Although Logan’s offense was bottled up most of the second half, the score remained 7-0 until the Vikings put together a seven-play, 69-yard scoring drive that started late in the third period and spilled over into the fourth.

Runs of 13 and 21 yards by Walkowicz moved the ball to the Logan 18 before quarterback Brandon Coleman scrambled on a pass play and found all sorts of running room around the right side. He went those last 18 yards to make it 14-0, after Carson’s second PAT kick of the night, with 10:01 remaining in the game.

Coleman replaced three-year starter Drew Pennington, who until Friday night had been the only Teays Valley QB who had ever taken a varsity snap against the Chieftains.

Then, after Javhon Poindexter picked off a Walsh pass and ran it back to the Logan 38, the Vikings needed just five plays to make it 21-0, with Walkowicz scoring on a 12-yard run with 5:51 remaining.

The Chiefs were thus shut out for the second time in as many games — the first time Logan has been blanked in back-to-back games to open a season since 1981 — and have been outscored 79-0.

“I told the kids ‘I commend you on your effort,’ “ Burke said. “I thought we played hard. I said ‘guys, don’t you feel a little bit more banged up than you did a week ago?’ (That’s) because you played harder. We need to continue to learn from the mistakes that we made and learn how to execute better.”

Burke felt the Chiefs matched up well with the Vikings going into the game.

“We made some different moves on offense,” he explained. “We moved Brady out and ran him a little bit more (and) we changed some personnel on defense. They seemed to match up with us just a little bit better… it seemed like we were similar teams.

“When we executed I was pretty proud of it, but then there are those other times when we kind of forget to perform our assignment and we get hurt,” he added.

“There’s a lot of young kids on (our) defense and they have the desire,” Weber stated. “Each week they’re seeing things at such a rapid pace. Each week they’re getting better at seeing varsity speed.

“Compared to our last game (a 31-23 season-opening victory over Westfall), that (Logan) team is way faster,” he added. “I think we had a really solid game plan against them. I think our kids knew what formations they were running, and that helps.”

As the Chiefs prepare to travel to Meigs for a week-three game, Burke was asked if he felt a little better after the loss to Teays Valley than he did the week before after the 58-0 shellacking his team absorbed at the hands of Dublin Jerome.

“Actually, we probably all feel a lot worse,” he said. “I said to the kids, ‘it feels a lot worse than it did last week, doesn’t it?’ (Compared to 58-0 last week), when it’s 21-0 and you’re scratching and clawing, you’re close and you just can’t get your head finally above water because you invested so much, that’s when it really hurts.

“So now we know what it feels like to play hard and play with maximum effort and we just need to continue to improve,” he added.

Weber is pleased with where his team is two weeks into the campaign, “but we still have a lot of work to do.

“If you play a veteran team — Logan’s not a bad team, they’re young — and you’re down at the half, you’re going to pay,” Weber noted. “Veteran teams usually don’t give up (big) second halves.

“Now, if we play a veteran team and we’re tied at the half, we’re fine with it,” he added. “We feel like we can score in the second half. Maybe this team faces adversity really, really well and maybe we have something really special here. We have to keep playing it week by week and see.”