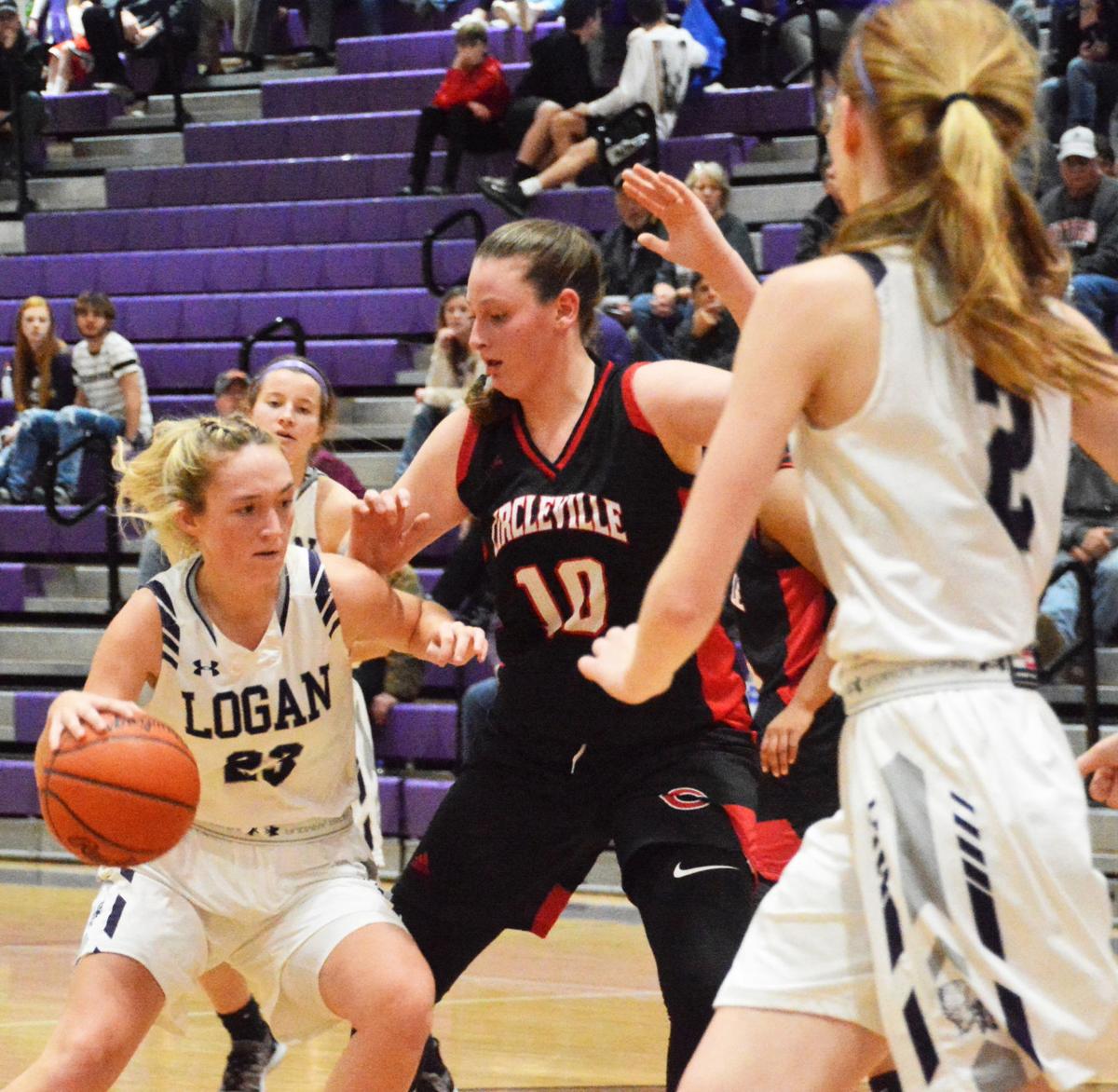 Circleville’s Meghan Davis (10) gets in the way of Logan’s Abbie Dicken (23) during a recent girls basketball game in Jim Myers Gymnasium. The Lady Chiefs broke a five-game losing streak by beating Groveport 48-41 on Saturday. 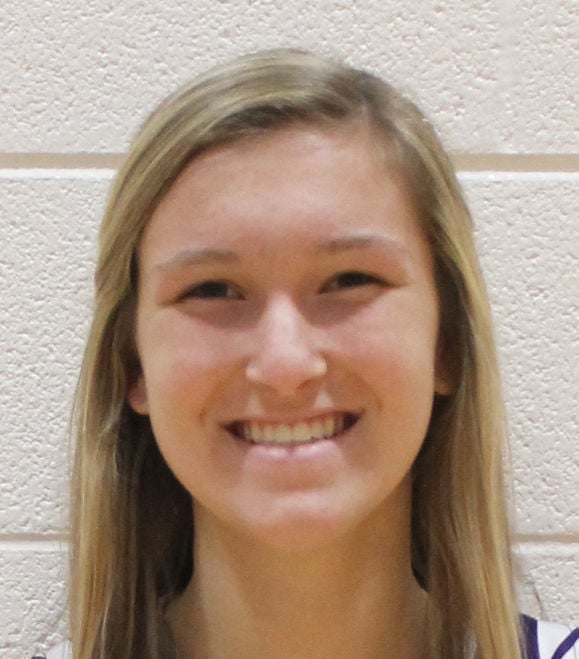 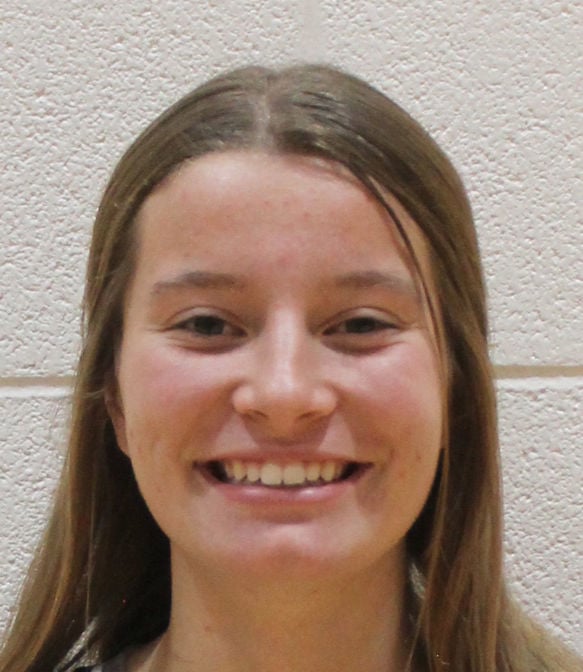 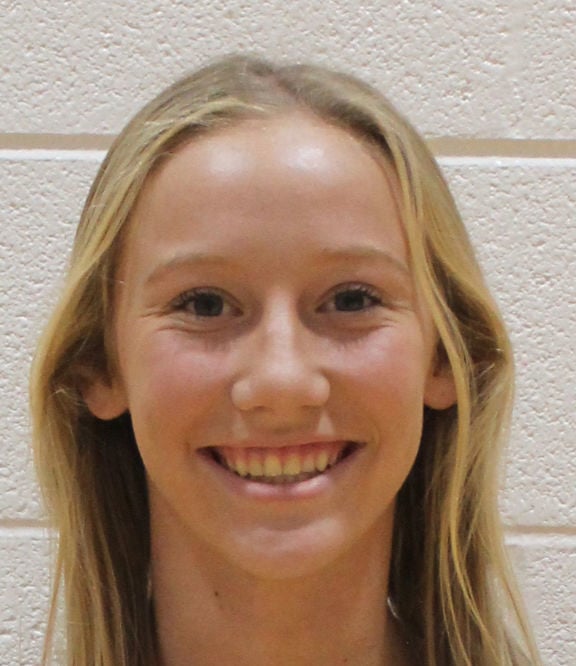 LOGAN — After having recently completed a difficult five-game stretch — all of them losses — it would be understandable if the Logan Lady Chiefs felt somewhat relieved to be facing Groveport on Saturday afternoon.

With all due respect to the Cruisers, playing Groveport allowed the Logan girls more of a chance to show an opponent — and, just as importantly, themselves — what they were capable of doing when roughly on the same level as their competition.

The Cruisers came to town having lost five games — two more than the Lady Chiefs’ previous five opponents combined — and again, with all due respect, lacked the firepower Circleville, Watterson, Fairfield Union, Warren and Maysville all have in one way or another.

Though the Lady Chiefs trailed by as many as five points early on, and were down two midway through the third stanza, they finished the quarter on an 11-0 run that powered them past the Cruisers 48-41 in Jim Myers Gymnasium.

The win thus wound up the 2019 portion of the season on a winning note and snapped a five-game losing streak at the hands of foes who, including games played through Saturday, have compiled an astounding combined record of 48-3.

Somewhat freed up, the Lady Chiefs were able to run their offensive sets well while doing an excellent job finding open teammates and, for the most part, played solid defense on the Cruisers (3-6) on the other end.

“I think it’s a big confidence boost,” said Logan coach Jessica Harris, whose Lady Chiefs now have the same 3-6 record as Groveport. “Losing five games in a row is tough — I’ve been there as a player and a coach — and you’re constantly asking yourself ‘are we good enough to even win ballgames?’ So getting this win today is awesome for us and can only help us.”

They were certainly good enough Saturday afternoon and were probably good enough to maybe have stolen one or two of those games they had lost as well.

“There were times when the game got close,” Harris said, “but I think playing in those past five games kind of gave us the confidence to continue playing as hard as we can and to play through some adversity.

“When we were down (during that losing streak), we kept fighting, and that just goes to show this team isn’t willing to just lay down and let a team roll over us,” she continued. “Those games definitely prepared us to play this one… to play a little bit harder, to work together as a team and get the job done.”

Logan played a fine floor game and got a true team victory, with seven girls scoring between four and 12 points, five girls snaring at least five rebounds, and registering 13 assists on their 17 baskets.

The only thing lacking for the Lady Chiefs on Saturday was accurate shooting from the field, which they were able to overcome in other facets of the game.

“Our shots weren’t falling but we did a really good job of finding the open person,” Harris praised. “I’m never going to yell at the girls for shooting and missing. They’re not missing intentionally. And we moved the ball really well today. Nobody was selfish.”

Logan’s balanced attack was led by senior Emilie Eggleston, who scored all 12 of her points in the second half after sitting almost the entire first half with a pair of early fouls.

Fellow senior Sydnee Breining came off the bench to contribute a career-best nine points on 4-of-6 shooting, oftentimes scoring when her teammates found her after slipping behind Groveport defenders down low, and junior Avery Thompson added eight points, seven rebounds and four huge assists.

“We had a couple good dump passes to Syd,” lauded coach Harris. “It was nice to see Syd step up and get a few buckets. She did a good job of finishing and had the confidence to shoot. The balanced scoring is how we’re going to have to win ballgames, with everyone doing a little bit of something.

“Egg sat out a little bit the first half with fouls,” she added. “Egg is fantastic against a zone (which Groveport played most of the time after starting out in man-to-man). She makes really good reads, has really good cuts and sees the open person, so it was awesome to have her in the second half helping with that and finding the open person and cutting when the defense’s back is turned.”

Groveport’s main threat was Casey Humphrey, an excellent 5-foot-1 junior guard who handled the ball well and slashed her way to the basket or at least into the lane on several occasions.

Humphrey finished with a game-high 20 points to account for a huge chunk of the Cruiser offense, with Tracy Taylor adding eight points and 10 rebounds and Ariez Clay also scoring eight for the Franklin Countians.

After both teams combined to put 24 points on the board the opening quarter, Logan scored the final five points of a low-scoring second stanza to take a 20-17 edge into the locker room at halftime.

Dicken scored from underneath off a Gabriel feed to tie the game, then Gabriel’s wing-three put the Purple & White in front.

Groveport scored seven of the first nine points of the second half to take a 24-22 lead on a bucket by Alauna Nguyen with 5:13 left in the third quarter, but would not score again until the final period.

Meanwhile, an Eggleston banker underneath tied the game and started that 11-0 burst, with Thompson, playing in the pivot, then dishing out three-straight dimes, assisting on a short-corner two by Breining, a Guthrie wing-three and an Eggleston cut to the tin.

Breining then assisted to get a cutting Thompson to the basket for two more with 15 seconds left in the period as Logan took a 33-24 lead into the final eight minutes.

“We started out the second half in a 2-1-2 to just kind of throw things off a little bit,” Harris said. “In man we adjusted to high-ball screens to make sure we had somebody helping on the ball screens so (Humphrey) couldn’t just cut the corner and drive right in without any help.

“Having that post-player whoever was guarding the screener come up and hedge that allowed them to slow it down a little bit and not just get wide-open lanes,” she added. “I think the kids trusting that adjustment and actually doing it definitely helped out.”

Humphrey, who scored 13 of her points in the first 11 minutes of the game, was held to just seven the rest of the way. She helped the Cruisers close the gap to 41-37 by hitting a three-ball with 2:12 remaining after Clay had hit for three from the top of the key and added a short jumper to get Groveport back into contention.

But that’s as close as the visitors would get. An Eggleston free throw, followed by a Breining bucket off an Eggleston feed, helped Logan regain a seven-point edge.

Four late free throws by Eggleston, sandwiched around a three-point play by Clay, kept the Cruisers at bay prior to the final buzzer.

“Credit to our girls for continuing to shoot even though we weren’t making shots (and) to have that confidence to continue on, trusting themselves and trusting each other,” Harris said. “They were (good) wide-open shots… it’s not like we were bricking it against the backboard. That’s just how it goes sometimes.”

The Lady Chiefs will open the new year, and play the third of seven-consecutive home games, Thursday (approximately 6:30 p.m. start) when they host Dublin Jerome (5-4) in Jim’s Gym.

“A win is always nice, especially with the way they fought through,” Harris said. “The girls stuck with it and kept trusting in the offense and in themselves.”