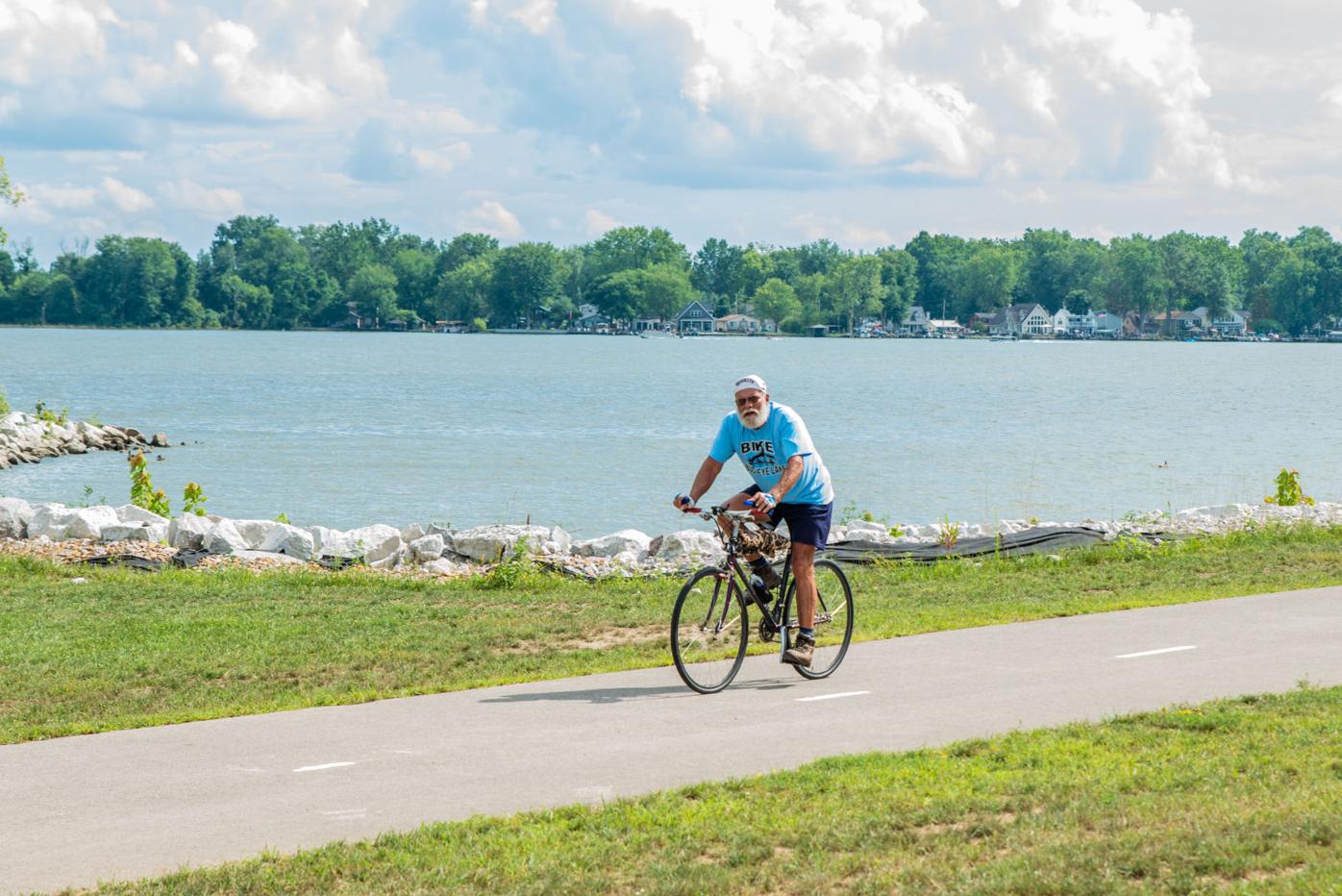 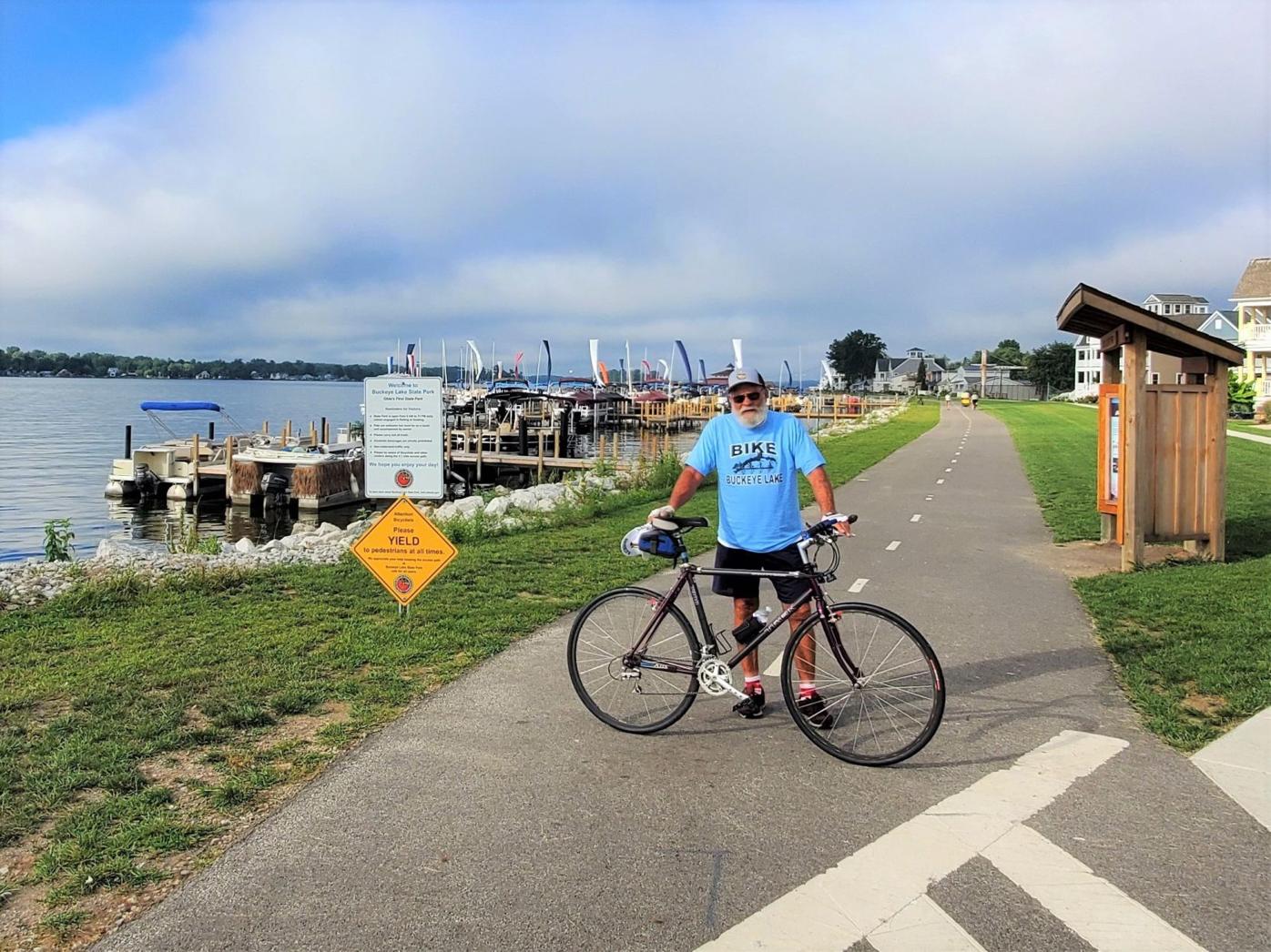 BUCKEYE LAKE — On Saturday, Aug.t 23, 2020, at the North Shore boat ramp in Buckeye Lake, a couple of Bike Buckeye Lake board members who were setting up for the annual Tour de Buckeye Lake cycling event heard, “10,000 miles at 7:39!”, and saw a fist shoot into the air with excitement.

That voice was of Buckeye Lake native, Mac McElroy, who had just achieved riding his bike solely on the lakeside path for his 10,000th mile. Unbeknownst to McElroy, Bike Buckeye Lake was the visionary and driving force behind getting the lakeside path that he enjoys so much created. To have his feat witnessed by volunteers of the nonprofit organization seemed like fate, so they had to talk with him.

So, what does one experience riding 10,000 miles on the same four-mile stretch day-in and day-out through rain, sleet, snow and scorching heat? McElroy is on this third set of new tires and third bike chain.

In the winter after a ride, McElroy can expect to sit in his warming van pulling ice out of his beard for a good 15 minutes. He fortunately has had only one injury, which was caused by slipping on a patch of snow. That injury prevented him from lifting his arm above his shoulder for two months and still causes him grief today. However, that injury never stopped McElroy from riding. He powered through even then.

When asked why he only rides on the path, the bicyclist replied, “I don’t like riding on roads.”

He used to ride the trail from Lakewood to Heath, and the Newark to Johnstown trail.

“Those trails in certain sections would beat me up,” he added.

When asked if he ever gets bored riding the same path with the same views every day, you could feel emotion coming from McElroy as he spoke.

“It’s a scenic path. Houses are being remodeled and new builds as well. I see something new every day. I’ve made lots of friends, people I see out in their yards who say hi, or who I regularly see on the path. I may have someone join me for a ride, and I never see them again. It’s always different. When I overhear people in the parking lot say they loved the ride, you know, I think, yeah, it’s a great area,” McElroy stated.

Bill Collinson, Bike Buckeye Lake board member and the founder of Tour de Buckeye Lake, curiously asked McElroy what was on his wish list when it comes to the path. Without hesitation he responded, “Make the path longer.”

McElroy, who has lived in Buckeye Lake his entire life mentioned the saying, if you build it they will come. “I see more people now than ever before riding bikes,” he said.

The Bike Buckeye Lake volunteers who were lucky enough to witness McElroy hit his 10,000th mile on the lakeside trail at 7:39 a.m. that morning, then continued to watch him ride back and forth on the trail throughout the day.

So what’s next for McElroy? His new goal is hitting 14,000 miles, or 1,750 laps, on the lakeside path by year-end. Anyone who knows McElroy has no doubt he can achieve that. Although, toward the end of the conversation he dropped a subtle bombshell by saying, “Who knows, maybe I’ll get tired of riding tomorrow and give it a break.” Spoken words from someone who truly wants to do what he loves in life.

For those of you reading his story, who have that certain thing you’ve always wanted to do — McElroy is 71 years old and takes breaks after laps to manage his diabetes. In his words, if there is something you want to achieve, “Don’t let anything stop you. Not age. Not health.”

Bike Buckeye Lake is a volunteer-ran, 501©3 nonprofit organization that was established in 2015 for the purpose of developing a multiuse trail around Buckeye Lake. Bike Buckeye Lake was the visionary and driving force behind the 4-mile lakeside trail. Surprising to most, the trail was not part of the State of Ohio’s original dam reconstruction plan.

Donations to Bike Buckeye Lake go toward the measures required for trail development, such as grant applications, land leases and acquisition, engineers and consultants, safety, maintenance, and publicity to garner support. Bike Buckeye Lake also holds an annual Christmas Bike Drive to provide underprivileged children in the tri-county area with a bike for Christmas. To date, Bike Buckeye Lake, through the generosity of supporters has given over 600 bikes and helmets to local children in need. Learn more about Bike Buckeye Lake on their website bikebuckeyelake.org.