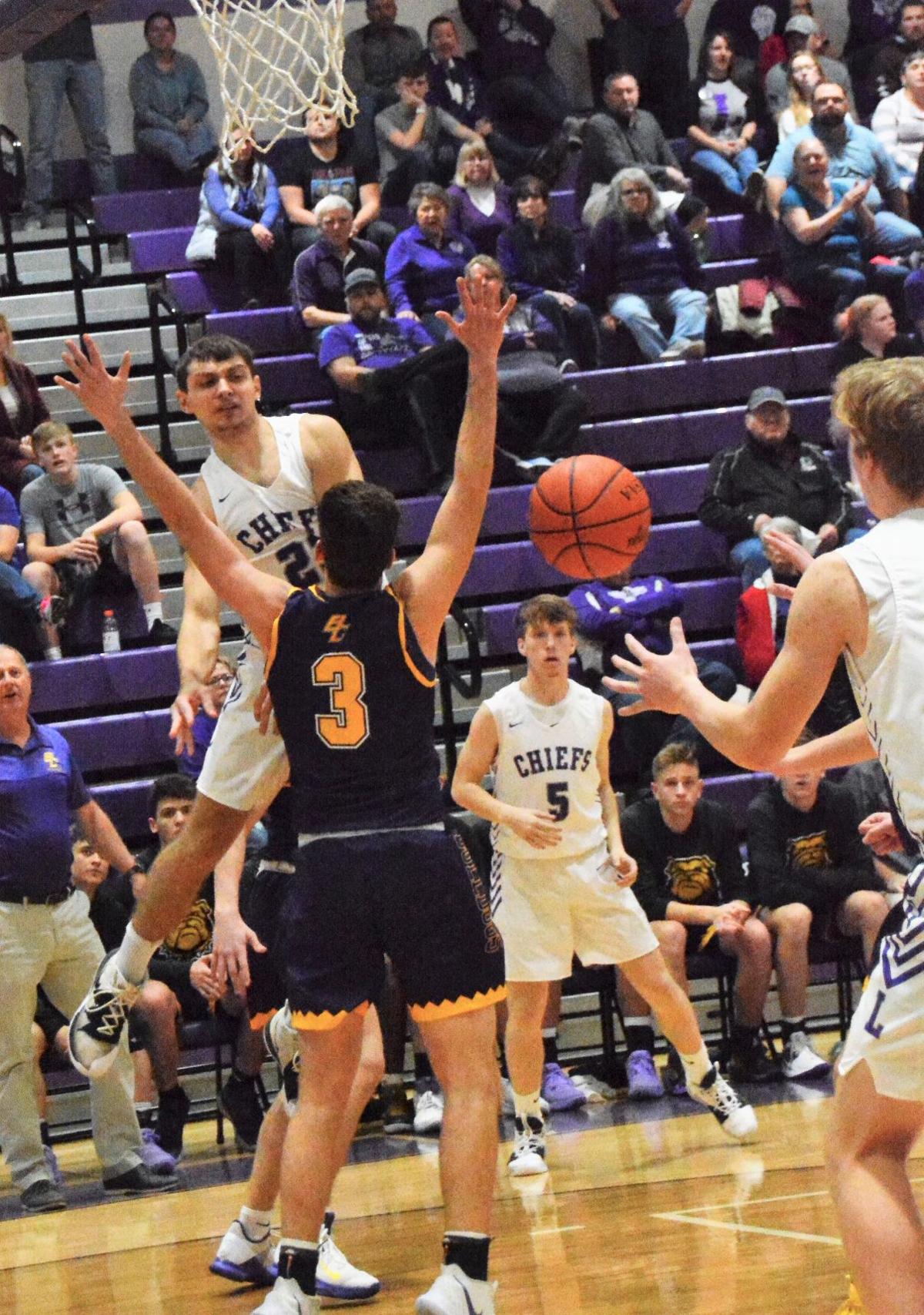 Logan’s Nolan Robinette flips a pass around Bloom-Carroll defender Trace Wisecarver to teammate Justin Wolfe during the Chieftains’ 55-39 loss to the Bulldogs Tuesday night in Jim Myers Gymnasium. Robinette had a 12-point, 10-rebound double-double for the Chiefs.

Colton Ruff of the Logan Chieftains takes the ball to the basket and draws a foul during Tuesday night’s game against Bloom-Carroll in Jim Myers Gymnasium.

Logan’s Nolan Robinette flips a pass around Bloom-Carroll defender Trace Wisecarver to teammate Justin Wolfe during the Chieftains’ 55-39 loss to the Bulldogs Tuesday night in Jim Myers Gymnasium. Robinette had a 12-point, 10-rebound double-double for the Chiefs.

Colton Ruff of the Logan Chieftains takes the ball to the basket and draws a foul during Tuesday night’s game against Bloom-Carroll in Jim Myers Gymnasium.

You’d never have known that by watching him Tuesday night.

Kuhns, who is headed to Eastern Illinois University to play quarterback for the Panthers, scored 26 points — in a number of different ways — as the Bloom-Carroll Bulldogs downed the host Logan Chieftains 55-39 in Jim Myers Gymnasium.

“Kuhns came ready to play tonight. He was the difference,” said Logan coach Chris Rider. “He was the best player on the floor. He’s a Division I athlete and he was really motivated tonight.”

The Chiefs (3-9), who dropped their third-straight game, started slow but had cut a 13-point deficit to 24-20 after Tegan Myers made a couple free throws with 3.7 seconds left in the first half. That would have been a good way for the Purple & White to end the half.

Kuhns had other intentions.

Bloom-Carroll inbounded the ball quickly to Kuhns, who raced upcourt and nailed a pull-up triple to beat the buzzer and put the Bulldogs up 27-20 at the intermission.

It would prove to be a back-breaking turn of events for the Chieftains.

Logan would get within seven points late in the third quarter before Jared Rose (eight points) played his own version of beat the clock by taking a dribble-drive feed from Trace Wisecarver (12 points, six rebounds and four helpers) to score in the lane at the buzzer.

Bloom-Carroll would then net the first seven points of the final period for a 16-point advantage the Chieftains never cut any closer than nine the rest of the way.

“We got off to a slow start and inched our way back and cut it to four and he hits a shot at the buzzer,” Rider said. “I knew that was big for momentum, and we just couldn’t make a run after that. We’re struggling offensively and it’s hard for us to get down” and come from behind.

“We’ve been really struggling scoring and I felt tonight our defense let us down,” he added. “Kuhns seemed like he got anything he wanted tonight, whether it be shooting a three, posting up or driving. And (the Bulldogs are) good enough in other spots if you don’t take care of Kuhns he can start dumping it off.”

And the Bulldogs came to town with some motivation.

“I think they were a little motivated, coming off a tough loss to Fairfield Union,” he added. “They wanted this one. And the last time we played them (two years ago) we beat them pretty good.”

Logan did lead 4-3 in the early stages before a Wisecarver rebound bucket started a 6-0 B-C run that put the visitors ahead to stay.

Kuhns scored the last two baskets of the opening quarter and added a three-bomb to open the second stanza and Rose came through with a scooping layup as the Bulldogs pulled out to a 22-9 lead with 6:10 left in the half.

The Chiefs answered with their best surge of the night, scoring seven-straight points on a pair of Robinette buckets and a Colton Ruff hoop-and-harm three-point play.

Wisecarver banked in a shot from the free throw line with 3:05 left in the half but B-C would not score again until Kuhns’ half-ending dagger.

Bloom-Carroll dominated in rebounding 39-28 and only committed six turnovers.

The Chiefs, who were coming off a 41-point loss at the hands of Central District power Pickerington North Saturday night, now turn around and host Columbus St. Charles Friday and undefeated (13-0) and state-ranked (No. 3 in Division I) Gahanna-Lincoln this Saturday.

“These are tough teams (this weekend), and then you throw in Sheridan (next Tuesday). They’re ranked fifth in Division II,” Rider said. “You want to try to get better these three games and then that last third of the season try to make a run to play some good basketball (heading into) the tournament.”